The heart is a pump that pushes blood through the body. Blood consists of solids and liquid. The basic function of the blood is to transport dissolved or suspended materials to a location of usage or a location of disposal. The liquid portion of the blood is made up of water with mineral ions and bioactive molecules dissolved in it; it is called plasma. It is sort of a salt-water solution with extras, in a very simplified view. The solid portion of blood is made of cells, platelets, cell fragments, and very large molecules. The ratio of these two components, solid and liquid, is expressed as a percentage and is called the hematocrit.

We can easily determine hematocrit with a centrifuge. Simply spin a clotted tube of blood at many times the force of gravity (about 12,000 or so times earthly gravity) and the solid portions of the blood will settle to the bottom of the tube. The liquid portion will remain at the top of the tube. Some simple math — divide the height of the solid portion of the sample by the total height of the sample then multiply by 100 — provides a percentage that will normally be around 45% for men and 35% for women. The precise proportion of solid to liquid in blood is plastic, changing in response to simple internal or external environmental changes to maintain the body’s homeostatic balance. Values below normal variance are called anemia. Values higher than normal variance are called polycythemia. 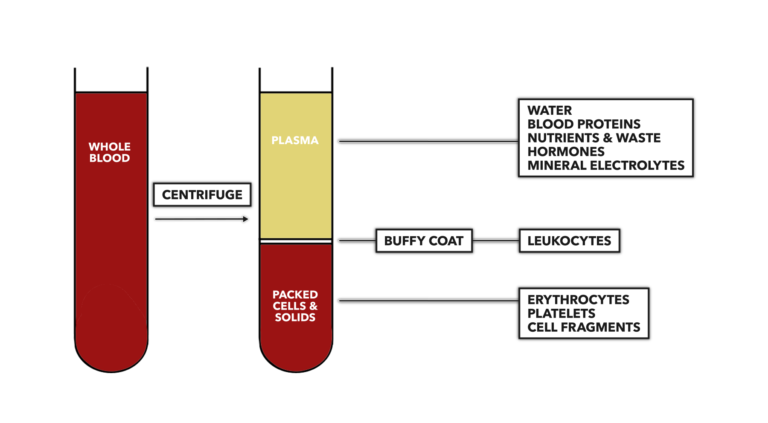 Figure 1: Determination of the hematocrit. Measure the height of the solid portion of the blood (bottom portion of right tube) then divide by the total height of the column of blood (distance between top line of plasma and bottom line of solids). When separated, water comprises approximately 90% of plasma volume. Dissolved mineral electrolytes in plasma, such as sodium, potassium, calcium, magnesium, chloride, and bicarbonate, make up less than 1% of its volume.

Red blood cells, about 25 trillion of them, primarily carry oxygen to tissues that need it and carbon dioxide to the lungs for removal. The number of erythrocytes can vary, but a higher number of erythrocytes (a higher hematocrit) carries with it a functional benefit that can lead to a higher ability to transport and consume oxygen. A higher hematocrit is associated with better endurance performance. As exemplified throughout human anatomy, a simple and small morphological change produces a profound functional improvement. As such, a great deal of interest has been directed toward developing exercise protocols to increase hematocrit, and unfortunately (in specific reference to sport), toward developing artificial means of increasing it.

In the latter case, using artificial means to increase hematocrit for sport performance enhancement, particularly when hematocrit is elevated to the 60s or higher, has resulted in heart failure during training. Essentially, the blood viscosity after drug administration, further increased during exercise, was too thick to pass effectively through small vessels.

Determining hematocrit is often a first-level doping test for endurance sports. If an athlete’s hematocrit is 50% or higher, they are generally not allowed to run, bike, or swim in competition. Further testing will then be performed on an elevated hematocrit sample to determine if the hormone erythropoietin was used to artificially increase red blood cell numbers.

Leukocytes are white because they do not contain significant amounts of iron. The blood contains far fewer leukocytes than erythrocytes. During hematocrit analysis, leukocytes aggregate as a thin fragile layer on top of the solid portion of the sample called the “buffy coat.” There are about 4,000 to 11,000 leukocytes in a microliter of blood, or about 38 billion in circulation (note that some leukocytes are found elsewhere in the body, not just in circulation).

Leukocytes do not provide exercise performance benefits other than to provide infection surveillance and defense services that keep you ready to train. In general, leukocytes produce antibodies or engulf (phagocytosis) and destroy (lysis) foreign matter. They can also participate in other important physiological processes. There are five basic types of leukocytes:

Neutrophils – Engulf and destroy foreign matter, about 66% of total leukocytes

Eosinophils – Important in the allergic response, about 3% of total leukocytes

Basophils – Important in the allergic response, less than 1% of total leukocytes 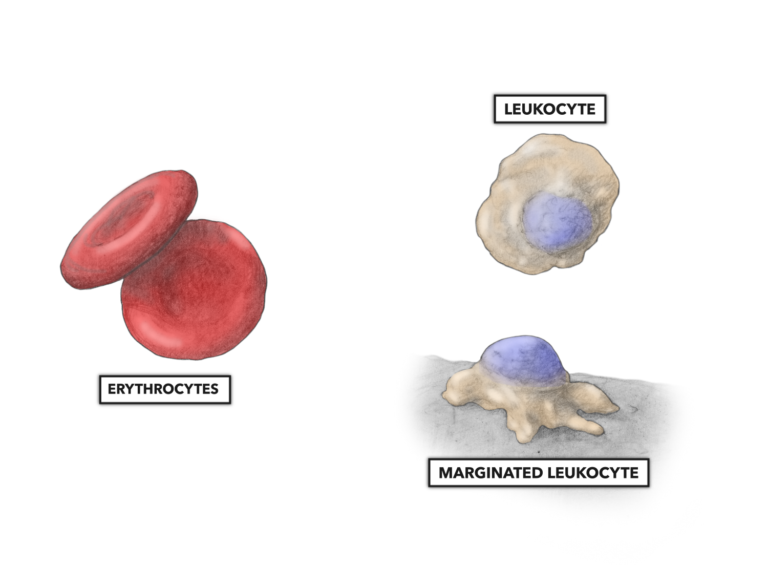 Figure 2: Erythrocytes (red blood cells) have an anucleate biconcave disk of about 8 micrometers in diameter. Leukocytes (white blood cells) have an ameboid appearance with a prominent nucleus. Each subtype of leukocyte varies by physical size (lymphocytes are about 7-10 micrometers, and monocytes are up to 25 micrometers), cytoplasmic volume, and nucleus appearance. Within the circulatory system, most leukocytes are free flowing (above right). A few are marginated, loosely adhering to and rolling along the interior wall of the blood vessel.

Exercise-Induced Changes in the Blood

In the early 1900s, it was found that hard exercise or physical labor performed in the early stages of poliovirus infection increased the severity of the infection and subsequent mortality rate. This marked the origin of the theory of exercise-induced immune suppression. It is not a surprise that attitudes toward engaging in hard exercise were not particularly positive until after a vaccine for the poliovirus was created in the 1950s. In fact there are numerous publications from that time referring to hard exercise as harmful.

More recent research into exercise-induced changes in the blood is quite ambiguous regarding changes in leukocyte morphology and function. Various frequencies and intensities of exercise can produce diverse effects on leukocyte numbers, and additional research is needed to determine specifics with regard to the positive and negative effects of exercise on the body’s immunological response.