The flow of blood through the heart follows the same general pattern as the electrical conductive pathway if we begin tracing it from its entry into the right ventricle. However, the blood flow system includes both inflow and outflow. The atrium on the right side of the heart receives deoxygenated blood from the body. This blood is delivered by the superior and inferior vena cava. Blood flow returning from the heart’s innate circulation collects in the coronary sinus and then passes into the atrium through the semicircular Thebesian valve into the atrium. 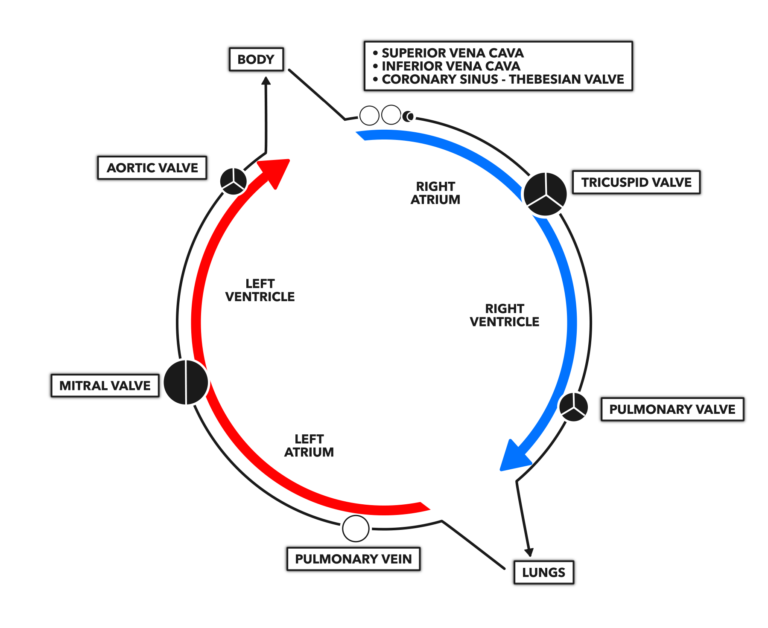 As atrial pressure increases, the Thebesian valve closes to prevent regurgitation (backward blood flow), and the blood is pushed through the tricuspid valve into the right ventricle. The tricuspid can be identified by the three (tri- = three) leaflets of which it is constructed. Blood ejection from the right ventricle occurs through the pulmonary valve after intra-ventricular pressure pushes it open.

Oxygenated blood enters directly into the left atrium. Once full, the pressure within the left atrium forces open the mitral valve and blood moves into the left ventricle. The mitral valve has two leaflets, which is why it is sometimes referred to as the bicuspid valve. Rising pressure in the full ventricle shuts the entry valve, opens the aortic valve, and the blood leaves the heart through the aorta.

The aorta is the most important artery in the body in terms of blood delivery. After emerging from the heart, it arches back toward the vertebral column and becomes known as the thoracic then abdominal aorta as it passes through those cavities. All the important appendicular arteries (like the subclavian and iliac arteries) and visceral arteries (like the hepatic and mesenteric arteries) are derived from the aorta. The majority of the blood leaving through the aorta is destined for systemic circulation, but a portion of it is immediately redirected from the aorta into coronary circulation.