A specialized set of cells within the walls of the heart conduct and direct electrical impulses from atria to ventricles. The arrangement of these cells is both compartmentalized and contiguous in order to organize electrical activity and induce a sequential muscle contraction, squeezing blood through the heart without allowing backflow. The electrical activity driving muscle contraction can be recorded and visualized. Virtually everyone is familiar with this technology — it’s the electrocardiogram (ECG or EKG) you have as part of your physical checkup or see on your favorite medical shows.

The cardiac electro-conductive pathway is commonly divided into seven components:

Note that all the anatomical features depicted here are not identifiable by simple visual inspection; a microscopic examination is required. 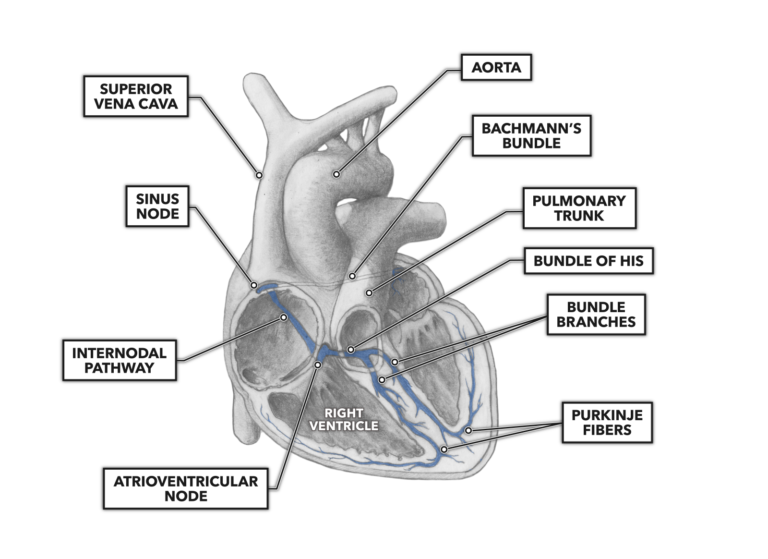 All cardiomyocytes possess a unique electrical capacity: They are autorhythmic. This means each cell can generate its own electrical stimulus to drive contraction. If the normal electro-conductive pathway fails, a cardiomyocyte or group of cardiomyocytes can take over and keep the heart beating — albeit with greatly reduced efficiency (and yes, this means that in all those sci-fi and horror movies you’ve seen, the heart still beating after it has been precipitously and involuntarily removed from the thoracic cavity of an unfortunate character does have a basis in reality).

These offshoot branches are called Purkinje fibers and are the terminus of the conduction system. They branch and divide extensively down the length of the septum then up and around the ventricular walls, enveloping and penetrating the ventricular muscle in a conductive network. This network enables the nearly instantaneous spread of a contractile stimulus, which causes the large ventricular muscle mass to contract as a single unit. With the sequential and separate contraction of the atria and ventricles, blood can then be moved in a controlled and directional manner that is responsive to biological demand.