Immediately downstream from the stomach, which has the largest diameter of any segment in the gastrointestinal system, we find the small intestine. This segment of the alimentary canal is the longest section, usually stretching to about 20 feet (6.7 meters) in length. You can approximate the length of a person’s small intestine by multiplying their body height by 3.5.

Obviously, a tube of this length cannot be extended within the confines of the body. Rather, it must be heavily folded and convoluted to fit within the constraints of its medial location in the abdominal cavity, inferior to the stomach.

Once the incoming chyme reaches the small intestine, it takes about three to six hours to be processed and to exit into the large intestine. 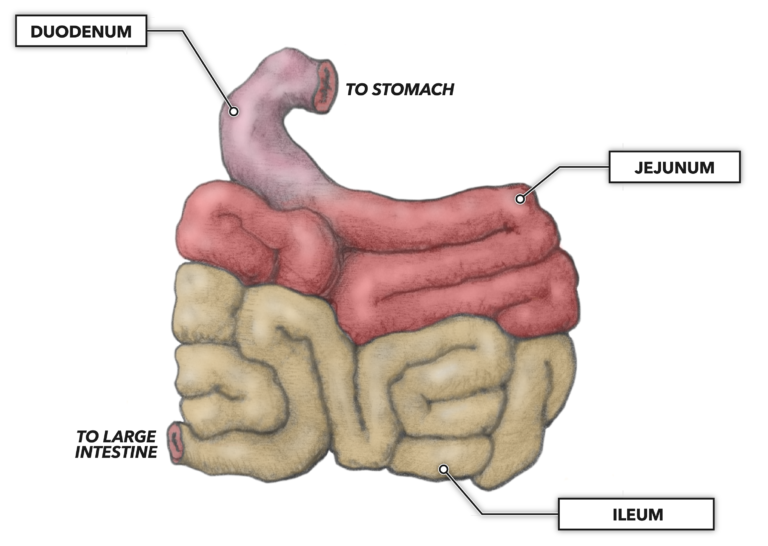 Architecturally, the small intestine is divided into three consecutive regions:

Duodenum – Connecting to the pyloric segment of the stomach, the roughly C-shaped duodenum is the shortest section and represents the first nine to eleven inches (23 to 28 centimeters) of the small intestine. The diameter of the tube along its length averages about one inch (25 millimeters). While very short with respect to the other two sections, this segment is very important to the digestive processes, as it has incoming ducts from the liver, gallbladder, and pancreas. Incoming fluids through these ducts neutralize stomach acids and further drive the digestion of proteins, carbohydrates, and lipids. Mechanical processing of chyme also continues via peristaltic contractions. Additionally water, electrolytes, and water-soluble nutrients are absorbed here.

Jejunum – There are few clear-cut means of identifying where each of the three regions of the small intestine begins and ends, but for the jejunum the transition can be closely approximated, as it has a more extensive blood supply than the other segments. This provides the jejunum with a redder appearance than the duodenum. Also indicative of this anatomical transition is the first appearance of the abdominal mesentery, a thin double sheet of connective tissue that arises from the peritoneum, anterior to the lower thoracic and upper lumbar vertebrae. The mesentery supports the underlying intestinal structure and is invested with areas of visceral fat (an energetic, insulating, and shock-absorptive resource) as well as an extensive network of blood vessels. It is commonly suggested that the jejunum comprises about forty percent (40%) of the total length of the small intestine. In actual measure, it represents about 6 to 8 feet (about 1.85 to 2.45 meters) of the intestine’s length. It has roughly the same diameter as the duodenum; continues most of the same digestive processes for proteins, carbohydrates, and lipids; but differs in that it is a major location of water absorption (destined for elimination at a rate of about 6 to 8 liters per day).

Ileum – The ileum (not to be confused with the ilium bone of the hip) is located lower within the abdominal cavity, and its terminus serves as a transition point, emptying its contents into the subsequent large intestine. It is commonly suggested that the ileum makes up the remaining 60 percent of the length of the small intestine — such estimates exclude the duodenum — making it about 12 feet long (3.75 meters). The diameter of the ileum is narrower than the previous two segments, being about 19 millimeters (0.75 inches), and the walls of the tube are also thinner. Comparative to the jejunum, the ileum has a less plentiful blood supply, and its peristaltic contractions are slower. Some enzymatic digestion continues in this segment, as does more absorptive activity, primarily of fatty acids and bile acids.

Overall, within the small intestine a great deal of enzymatic digestion occurs, the products of which are very small nutrient molecules, small enough to be absorbed through the intestinal wall and into the bloodstream. For carbohydrates this means monosaccharides (simple, single-unit sugars like glucose). For proteins this means individual amino acids. For lipids this means fatty acids.

While we often refer to the gastrointestinal system as a tube, it is not a simple pipe. It has a more sophisticated structure that maximizes its inner surface area. If it was a simple pipe, its inner surface area would be about a half a square meter (about 5.4 square feet), hardly enough to absorb a small fraction of the volume of food handled by the intestines each day.

There are three specific structures that increase the inner surface area of the small intestine to about 250 square meters (roughly 2,700 square feet):

Mucosal folds – The inner layer of the intestine is heavily involuted and convoluted, which grossly increases the surface area as well as aiding in mixing via added turbulence during peristalsis.

Villi – Packed onto the mucosal folds is a massive number of villi, tiny fingerlike projections into the intestinal lumen. Every villi is lined with epithelial cells. The presence of the villi adds a second expansion of the interior surface area of the small intestine.

Microvilli – Every epithelial cell of the villi, on the side facing the intestinal lumen, is further equipped with even smaller projections called microvilli. These densely packed projections add a third layer of surface area expansion, thus increasing the intestine’s absorptive surface area. When observed under a microscope at the microvilli level, the appearance is called the “brush border,” an obvious reference to a profile view of a hair, tooth, or paint brush. 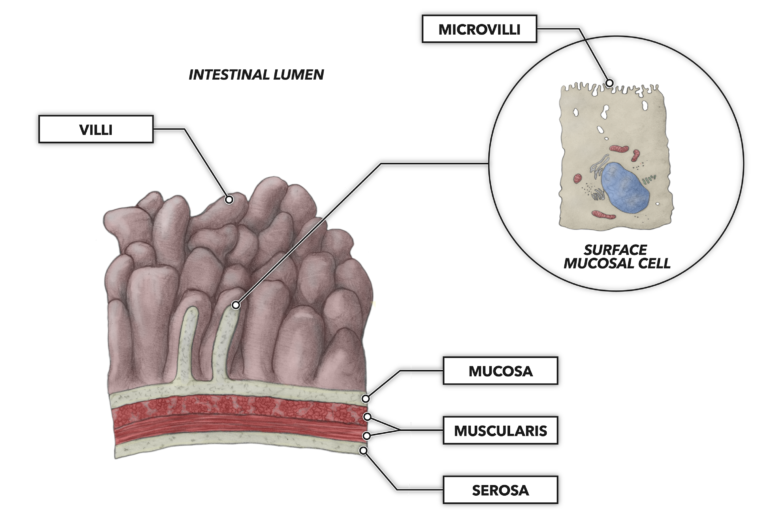