CrossFit | The Gastrointestinal System: The Esophagus

The esophagus is one of the simplest structures that form the gastrointestinal tube. It lies between the posterior aspect of the trachea and the anterior surface of the vertebral column. The tube runs from the upper esophageal sphincter at the lower end of the pharynx and ends approximately 7 to 10 inches (18-25 cm) to the inferior at the lower esophageal sphincter, where it interfaces with the stomach.

Its route between the two sphincters runs downward, behind the trachea and anterior to the vertebral column as it passes through the thoracic cavity (cavity formed by the collar bones, ribs, and diaphragm). It then penetrates through the diaphragm and terminates near where it enters the abdominal cavity and connects to the stomach.

Its function is likewise simple: It conducts food or drink boli (plural of bolus) downstream to the stomach. 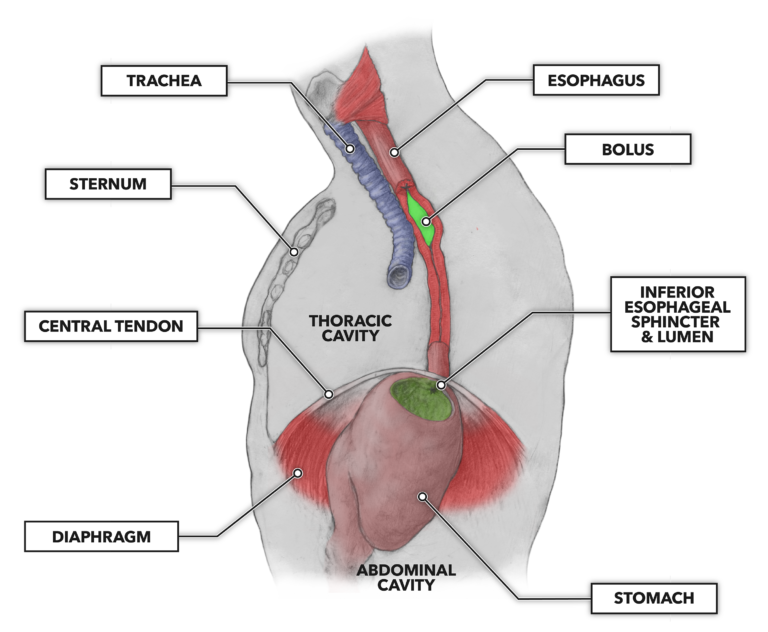 Figure 1: The esophagus traverses the thoracic cavity starting at the pharynx and ending at the stomach, just below the diaphragm. The circular and longitudinal musculature present squeezes behind the bolus, pushing it downstream. The musculature immediately in advance of and encircling the bolus relaxes to allow esophageal distension.

Unlike the trachea, which is held open by semi-rigid connective tissue, the esophagus will vary in diameter, ranging from near collapse while empty to distended while full of food or drink.

The esophagus is a muscular tube comprising four layers:

Mucosa – The innermost layer (bounding the lumen) is composed of epithelial cells, extracellular matrix, and mucus glands. These glands secrete mucus and provide lubrication to facilitate sliding of boli along the length of the esophagus. Also found here are neural mechanoreceptors that drive and coordinate sequential and top-to-bottom peristaltic movement.

Submucosa – The next innermost layer is composed largely of connective tissue perforated by blood vessels and containing mucus glands.

Muscularis – The third layer is the muscular layer. Unusually for the digestive system, this layer has both striated and smooth muscle. The uppermost third of the esophagus is prominently striated muscle, the middle third is a mixture of striated and smooth muscle, and the lower third is prominently smooth muscle. When the musculature relaxes as food passes through, the esophageal diameter can range up to about 0.8 to 1.2 inches (20-30 mm). During contraction the diameter can reduce to approximately 0.04 inches (1 mm) at the posterior of the bolus in passage.

Both the upper and lower sphincters are normally closed. The upper closure prevents air from entering the gastrointestinal tube. The lower closure is important. While the mucosal layer is robust and replenishes its cell numbers daily, if the lower sphincter incompletely closes the transition between the esophagus and stomach, digestive acids from the stomach may be squeezed upward and back into the lower esophagus (reflux). This causes damage and a burning sensation that can be felt in and around the chest and throat. Sporadic such occurrences are generally called heartburn. If the episodes are frequent and consistent, it is termed gastroesophageal reflux disease (GERD).

Very little digestive activity occurs in the esophagus during the five or so seconds of transit time. The primary biochemical activity is the continuation of the carbohydrate breakdown initiated in the oral cavity by salivary amylase.