We mentioned previously that the mouth was the gateway to the gastrointestinal tract. The term “gateway” implies that passage into the tract is gated; in other words, some things are selected to pass through and some things are rejected. This process of selection is mediated by taste receptors (taste buds) on the tongue.

Tasting food does not magically happen when some morsel gets popped into the mouth. Taste needs a jumpstart to happen, and saliva is the key, as dry foods must be solubilized before the tongue can taste them. Saliva, secreted by the parotid, sublingual, and submaxillary salivary glands, facilitates taste sensation. It also aids in a person’s ability to discriminate between taste sensations, as the nearly constant release of saliva washes food residues away over time. Saliva also has a macronutrient-specific function because it contains alpha-amylase, an enzyme that begins the breakdown of complex carbohydrates (starches). 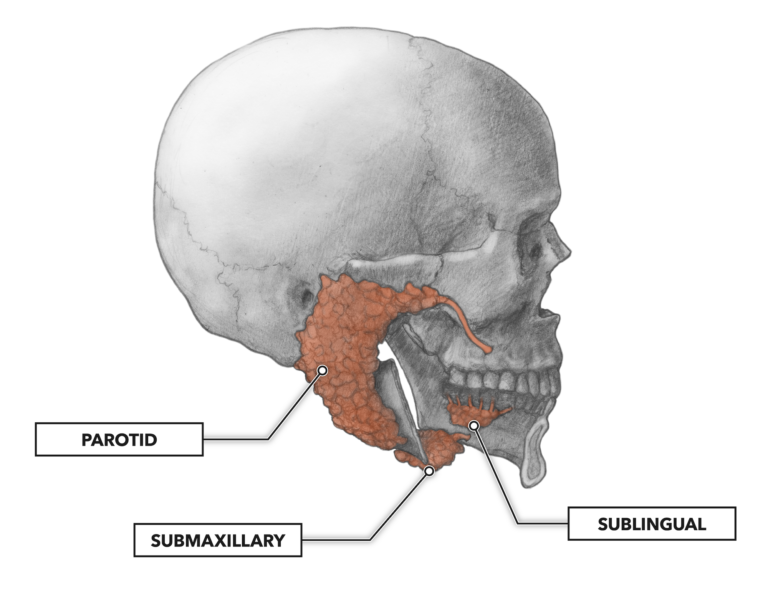 The experience of tasting something is fairly complex, comprised of chemoreceptors that are specifically activated by unique biochemicals in the various foodstuffs we consume. Most of us are likely familiar with sweet, sour, salty, and bitter taste qualities and may recollect from science class that taste buds specific to those qualities are found on different parts of the tongue’s surface. In the past two decades, a fifth taste quality, savory, has become widely accepted. Although first postulated in 1909 as the taste quality umami, it was not until 2007 that the chemoreceptor for this particular quality was identified.

Although we generally associate the purpose of taste buds with deriving pleasure or satisfaction from the foods we eat, they do have a more fundamental biological function: survival. Sweet and savory flavors are perceived as good, and this promote our consumption of nutritive food — sweet drives the urge to consume energy-containing carbohydrates and savory drives the urge to consume amino-acid-rich foods to support protein synthesis. On the other side of the taste coin, bitter and sour flavors are perceived as bad tastes that are innately considered potentially harmful and as toxic or acidic. At the more aggressive end of the body’s response here is the rejection of the foodstuff in the mouth — for example a spoiled fruit, rotten meat, or a poisonous plant. An even more aggressive response would be regurgitation of the stomach’s contents.

The last taste quality, salty, is conditional and depends on the individual and their physiological status. Salty flavors can be perceived as having either a good or a bad taste. This can drive consumption or avoidance and rejection.

Figure 2 – The tongue’s surface is covered with small bumps called papillae. Associated with those papillae are the chemoreceptors of taste (aka, the taste buds). There are roughly 10,000 taste buds present, with receptor types specific to each of the five basic tastes regionally distributed over the tongue. The images above provide a superior view of the lower jaw and tongue and portray a widely accepted taste distribution pattern.

Taste buds exist beyond the confines of the tongue. Some — sweet and bitter — are found in the nose and sinuses. These chemoreceptors are the ones sommeliers, cicerones, and gourmands use to assess olfactory presence more fully, beyond simple oral sensation.

Again, the presence of taste receptors, this time in the nasal passages, serves an innate survival function. For example, in a food colonized by Pseudomonas aeruginosa, the bacteria secretes acyl-homoserine lactone, which triggers the firing of the bitter taste receptors in the sinuses when smelled. This drives rejection, mucus secretion, and the movement of inhaled or ingested bacteria into secreted saliva, where an enzyme in saliva – lysozyme – will act to destroy the pathogen. 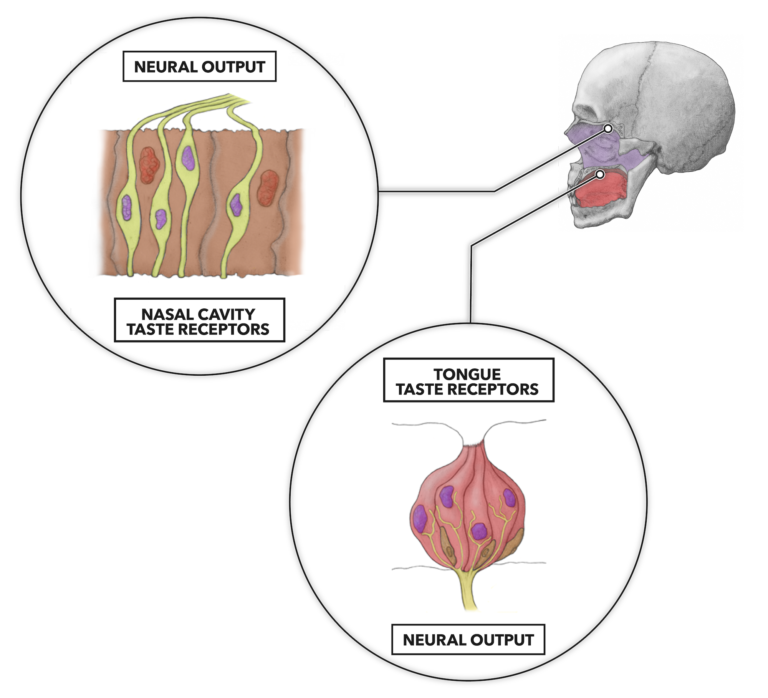 Our taste senses are built to evaluate the foodstuff placed in our mouth for caloric content, electrolyte concentration, carbohydrate content, protein content, or potentially harmful substances. These chemoreceptors are binary, on or off, and when triggered there will be a binary response, consume or reject. These responses are innate and not learned.

However, the taste response can be modulated. Initially repulsive foodstuffs can become attractive with time and repeated exposure. Coffee is an excellent example, where initially it is rejected but with repeated exposures (frequently with many additives) the strength of the neural response is blunted and palatability increases. In the shorter term, taste perception from these chemoreceptors can be affected by other neural-based chemosensory and cognitive factors — for example hunger, satiety, emotional state, and expectation of outcome from consuming the foodstuff. These comingling factors can stimulate appetite or suppress it.