CrossFit | The Effects of a Low-Carbohydrate, Ketogenic Diet on the Polycystic Ovary Syndrome: A Pilot Study

Question: Can a ketogenic diet lead to meaningful improvements in patients with polycystic ovary syndrome (PCOS)?

Polycystic ovary syndrome, or PCOS, is the most common endocrine disorder among reproductive-aged women and is characterized by elevated testosterone levels, menstrual disturbances, excessive body hair, and infertility (2). Previous research has associated PCOS with insulin resistance, obesity, and poor metabolic health (3). This small pilot study tested the effects of a ketogenic diet in overweight women with PCOS.

Eleven women enrolled in the trial. All were given an Atkins diet book and intensive group coaching on how to follow a ketogenic diet. Their carbohydrate intake was limited to no more than 20 grams per day (4).

Six subjects were unable to follow the protocol for the entire 24 weeks. The remaining five subjects were highly compliant with the dietary prescription, as evidenced by high serum ketone levels at all tested timepoints.

Subjects lost an average of 12.1% of their initial body weight, and serum insulin levels decreased significantly. Serum testosterone levels decreased 30%, and LH/FSH ratios decreased 36%. Two subjects who noted previous fertility problems became pregnant over the course of the trial. Changes to lipids and other metabolic parameters were not statistically significant. The changes to all five subjects who remained compliant with the diet are summarized in the table below. 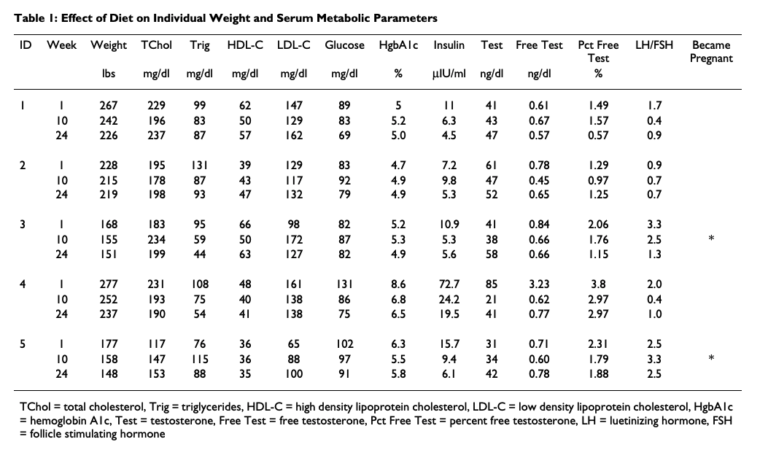 Overall, this trial provides preliminary evidence that a ketogenic diet can lead to significant improvements in endocrine levels in overweight PCOS patients. Future research can expand on these observations by exploring the effects of other metabolic therapies, including exercise and other dietary interventions, in patients with PCOS.