The arm is suspended, relative to the axial skeleton, with very little bony support. Instead, muscle, tendon, and ligament attach the arm to the thoracic architecture. This arrangement creates a great deal of mobility but also poses a problem with regard to joint stability in high-velocity or high-force conditions. The rotator cuff, therefore, is a popular topic in exercise and sports.

Originally known as the musculotendinous cuff, the term “rotator cuff” was introduced into the medical literature in the 1950s (1). It refers to a group of small muscles around the shoulder joint. More specifically, the term describes the arrangement of four small muscles and tendons around the head of the humerus as it sits in the glenoid fossa of the scapula. You can crudely think of the muscles as the sleeve and the intermeshed tendons as the cuff. The rotator cuff muscles include the supraspinatus, infraspinatus, teres minor, and subscapularis (SITS is a common acronym for remembering these muscles). They lie on both sides of the scapula and contribute somewhat to motion and more so to the stability of the glenohumeral joint. The manner in which the tendons are positioned around the joint provides the stability native to this combined structure. 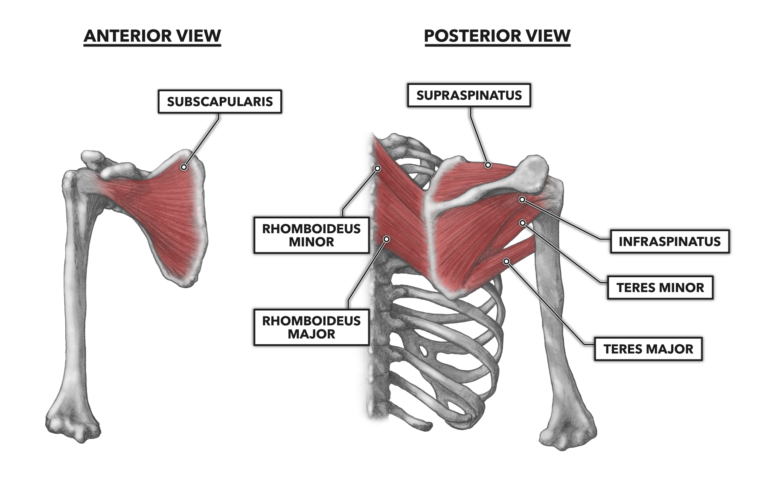 Supraspinatus – The name provides a clue to the muscle’s location: above (supra-) the spine (spinatus). It lies above the scapular spine with its proximal attachment along the curvature formed by the spine and body of the scapula superior to the spine. The muscle attaches distally to the greater tuberosity of the humerus at its most superior point. The distal tendon passes beneath the acromion and superior to the glenohumeral joint.

This superior attachment means it is able to generate very little torque around the joint. Its position relative to the joint makes it an abductor, but its small size (about 28.3 cm3 or 0.12 cups in volume (2)), limits its contribution to movement to only about the first 15 degrees of abduction. Beyond that point, the co-contracting deltoideus assumes even more of the original abduction load, and the supraspinatus is relegated to an essentially isometric stabilization role. The supraspinatus is a deep muscle, covered by the overlying superior segments of the trapezius.

Infraspinatus – The name “infraspinatus” also conveys much about the muscle’s location. It is inferior (infra-) to the scapular spine (spinatus). The spine of the scapula separates the supraspinatus and infraspinatus, which wraps around the humerus and attaches distally to the greater tuberosity.

The infraspinatus is an external rotator of the glenohumeral joint and assists in abduction of the arm. However, as with the supraspinatus, its relatively small size (about 82.9cm3 or 0.35 cups in volume (2)), and very short lever arm on the humerus means the muscle is capable of producing very little torque around the joint and will act primarily as a stabilizer.

Teres minor – Located just superior to the teres major, the teres minor is very small (about 11.4 cm3 or 0.05 cups in volume (2)) and attaches proximally from just below the glenoid fossa, angling downward about two-thirds of the way across the scapula. The attachment terminates at the lateral border of the scapula. As the muscle approaches the axilla, it passes posterior to the shoulder joint and attaches distally to the greater tuberosity, just lower than the attachments of the supraspinatus and infraspinatus.

The teres minor functions to pull the humeral head into the glenoid fossa and externally rotate the head of the humerus to the posterior. With strong horizontal abduction and outward rotation of the humerus, you can generally find these muscles in relation to a triangle formed by the inferior line of the posterior deltoid, the lateral border of the trapezius, and a line formed by the superior aspects of the teres major and latissimus dorsi.

Subscapularis – Sometimes this muscle’s location is confused with the infraspinatus, but breaking down the name into its roots makes the location of the muscle easily distinguishable. The prefix “sub-” means lying below or under. “Scapularis” refers to the scapula, so the subscapularis lies under the scapula, in the space between the scapula and rib cage. The subscapularis attaches proximally across the majority of the anterior and inferior surfaces of the scapula.

It is broad and roughly triangular in shape, and it thins as it approaches the axilla. The muscle attaches distally on the lesser tuberosity of the humerus. This anterior attachment results in the internal rotation of the humeral head during contraction. This is the largest of the rotator cuff muscles (about 96.8 cm3 or 0.41 cups in volume (2)) and can produce a moderate amount of tension drawing the head of the humerus into the glenoid fossa. It thus serves as a stabilizer of the shoulder and defense against dislocation.

Note the attachments of each of these muscles are very close to the end of the humerus. Now think of the basic rules of a lever. It should be apparent that these muscles’ primary role is not gross movement of the shoulder, as they are not in an advantageous position for this. Rather, their primary purpose across all shoulder movements is to keep the humeral head firmly seated in the glenoid fossa. 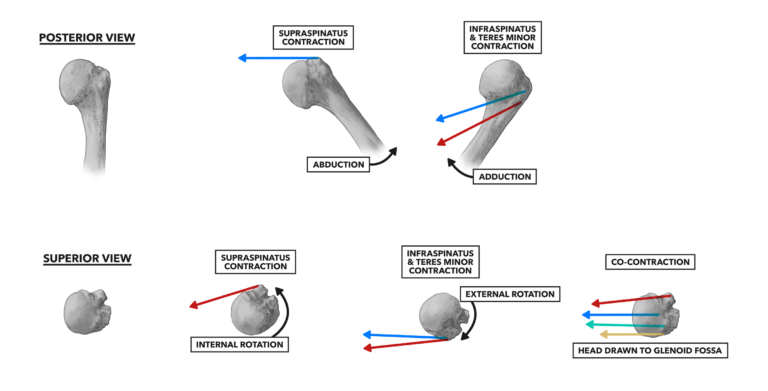 Figure 2: Individual muscles contribute to abduction, adduction, and rotation of the humerus, depending on the location of their attachment on the humeral head. The co-contraction of all four muscles acts to pull the humeral head into close association with the glenoid fossa of the scapula.

There are a few other muscles related to the rotator cuff. They act on the scapula to hold it in position or mimic the function of the cuff musculature.

Teres major – The teres major is a fairly small muscle that lies superior and approximately parallel to the latissimus dorsi, lateral to the trapezius and inferior to the posterior deltoid. It attaches proximally near the posterior inferior angle of the scapula, runs under the axilla, and attaches distally on the anterior surface of the humerus at the bicipital groove, medial to the distal attachment of the latissimus dorsi.

The teres major carries out similar functions to the latissimus dorsi: It is a medial humeral rotator, an adductor of the humerus, and a synergist with the latissimus dorsi in pulling a previously elevated humerus down and back. Given its small size and poor leverage position, it is not a large contributor to forceful humeral movement. Rather, it acts with the rotator cuff and latissimus dorsi to stabilize the humeral head in the glenoid fossa.

Rhomboideus (major and minor) – The rhomboideus has two sections that appear as two distinct muscles and function as a single unit. While the contraction of the rhomboideus will generally cause retraction of the scapulae (pulling them closer to the midline of the body — i.e., squeezing the shoulder blades together), the rhomboids also anchor the scapula (and thus the upper limb) onto the ribcage, facilitating the actions of the rotator cuff muscles.