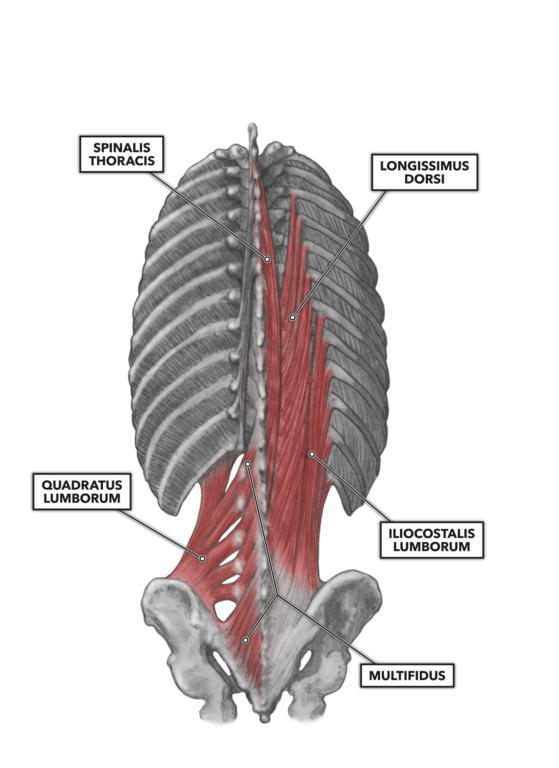 Longissimus dorsi – “Longissimus dorsi” is often used to refer to several associated muscles: the longissimus capitis, longissimus cervicis, longissimus thoracis, and longissimus lumborum. Another term associated with these muscles is “erectors spinae,” or “spinal erectors,” which names the functional grouping to which they belong. Together, these closely integrated longissimus muscles span the majority of the back, having robust attachments along the length of the entire axial skeleton. Specifically in the lumbar segment, this multi-segment muscle attaches to the lower ribs, then angles down medially to attach to the transverse processes of the lumbar vertebrae. The lowest tendon slips merge with the lumbodorsal fascia that covers and attaches to the sacrum.

The upper segments attached to the ribs and thoracic vertebra function primarily to pull the posterior aspect of the ribs down toward their lower attachments on the lower thoracic and upper lumbar vertebrae. This function contributes to respiration and posture. Unilateral contraction aids in lateral flexion.

The muscle can pull the thoracic ribs down, extend the lower thoracic and lumbar vertebral segments, and contribute to lateral flexion.

Multifidus – As with the cervical and thoracic segments, the multifidus is found deep, crossing three vertebrae (or four) from medial to lateral along the length of the vertebral column. They attach to the spinous process of a higher vertebra and to the transverse process of a lower vertebra. The muscle group terminates with attachments to the sacrum. As the size of the individual vertebrae increases — cervical, thoracic, lumbar — so does the size of the multifidus. As these muscles are primarily stabilizers of the vertebral column, the longer the vertebral segment requiring stabilization, the larger a muscle required. 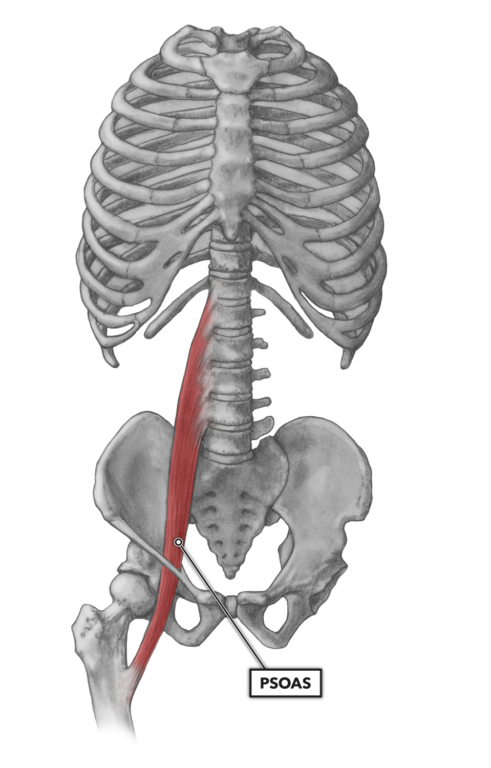 Psoas (Figure 2) – This is a long muscle that has its most superior attachment to the last thoracic vertebra. It then attaches to the transverse processes of the five lumbar vertebrae before angling downward and laterally to terminate in attachment at the lesser trochanter of the proximal femur.