Question
Do traditional risk factors (i.e., changes in lipid profiles and blood pressure) entirely explain the increased risk of heart disease observed in diabetic subjects, or does insulin resistance or hyperglycemia potentially play a direct role?
Takeaway
This review argues insulin resistance and hyperglycemia directly contribute to the development and progression of cardiovascular disease in diabetics in ways reflected within and independent of these traditional risk factors. The review authors suggest efforts to manage heart disease risk in diabetic and prediabetic subjects should focus directly on managing insulin and glucose levels and insulin resistance, not merely on improving lipid profiles and blood pressure.

By 2035, the worldwide diabetic population is expected to exceed 500 million; 95% of these individuals will have Type 2 diabetes (1). The primary cause of death in diabetics is cardiovascular disease, with Type 1 diabetics having three to 10 times greater risk of cardiovascular disease than the general population (2) and Type 2 diabetics having triple to quadruple the risk (3). A diabetic’s risk of having a first heart attack is equivalent to the risk of a nondiabetic heart attack survivor having a second heart attack (4).

Type 1 and Type 2 diabetics generally have elevated LDL cholesterol levels, lower HDL cholesterol levels, and higher blood pressure than similar nondiabetic individuals (5). The degree of increased heart disease risk seen in diabetics, however, is much greater than would be expected based on their levels of these conventional risk factors, which suggests characteristics specific to diabetes — namely hyperglycemia and insulin resistance — play an additive role (6). 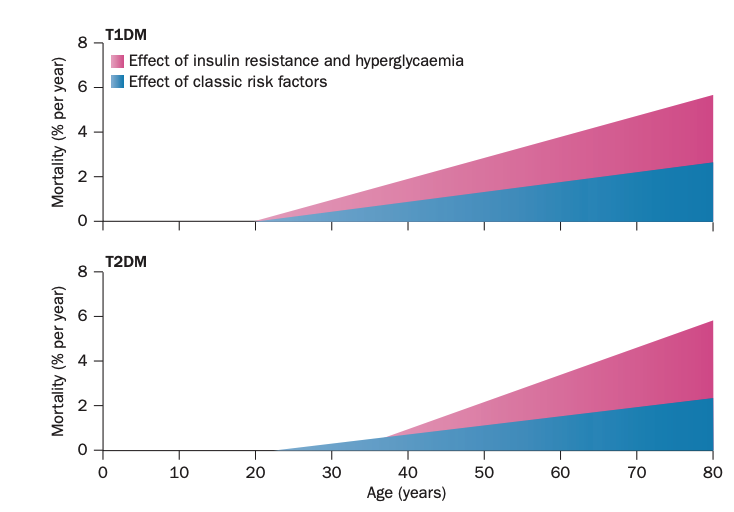 Figure 1: Schematic illustrating the evolution of cardiovascular risk in Type 1 and Type 2 diabetics over time and the relative contribution of classic risk factors (lipids and blood pressure) as well as insulin resistance and hyperglycemia, specifically

As fat cells expand (i.e., as the cells grow and an individual becomes fatter), they become inflamed and less responsive to the effects of insulin (8). A key effect of insulin on adipose tissue is to shift fat cells from lipolysis — that is, the breakdown of fat stores and release of free fatty acids into circulation — to fat storage. Insulin-resistant adipose tissue no longer responds this way to insulin elevation, leading to a chronic increase in circulating free fatty acid concentrations. This then leads to fat accumulation in the liver and other organs. Insulin-resistant fat tissue may also directly produce and release inflammatory cytokines and other atherogenic molecules (9).

As the liver takes on fat due to increased lipid production within the organ or uptake of fatty acids from the blood, it becomes insulin resistant (10). The insulin-resistant liver increases gluconeogenesis and decreases glycogen synthesis, chronically elevating blood glucose levels (11). The combination of hepatic insulin resistance and high levels of circulating fatty acids also leads to increased VLDL production, decreased HDL cholesterol levels, and smaller LDL particles, all of which are associated with increased heart disease risk (12).

Increased fat accumulation in the pancreas impairs the organ’s response to glucose elevation and reduces insulin secretion (13). This further exacerbates hyperglycemia by suppressing a healthy insulin response and over time leads to the chronic hyperglycemia (in the absence of exogenous insulin) seen in late-stage Type 2 diabetics.

Finally, hyperglycemia has been associated with increased production of reactive oxygen species across multiple organ systems, which has been independently linked to cardiovascular disease (17).

Taken together, these mechanisms illustrate multiple pathways by which the hyperglycemia, hyperinsulinemia, and insulin resistance present in Type 1 and Type 2 diabetes directly contribute to the development and progression of atherosclerotic disease. These same mechanisms also demonstrate how hyperglycemia, hyperinsulinemia, and insulin resistance may contribute to the deterioration of traditional risk factors such as blood pressure and lipid profile. This suggests efforts to reduce risk of cardiovascular disease in diabetic patients — the primary cause of mortality — should focus on ameliorating defects in glucose and insulin metabolism in addition to or independent of managing conventional risk factors.