This 2018 review combines a comprehensive summary of brain aging with a brief overview of the evidence linking metabolic patterns to acceleration or suppression of brain pathology.

The authors outline 10 “established hallmarks” of brain aging, presented in Figure 1 below. 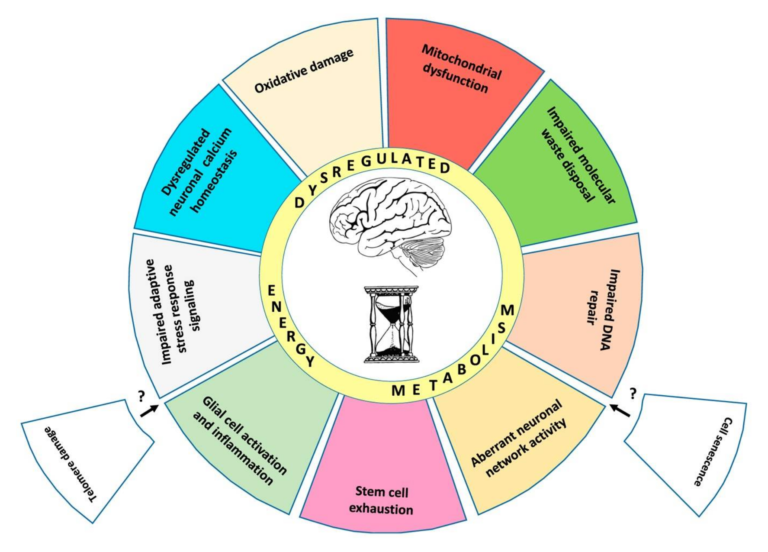 Alterations in brain metabolism are a well-known element of neurodegenerative diseases, with deficiencies in glucose metabolism appearing early in the development of Alzheimer’s, prior to other symptoms (10). Parkinson’s patients similarly show reduced glucose metabolism in areas associated with motor control (11).  Insulin resistance is associated with loss of cognitive function, and decreased glucose consumption/metabolism is seen in the temporal and parietal lobes of elderly subjects with cognitive impairment (12). This leads the review authors to argue metabolic defects may play a role in the causation and/or development of neurodegenerative disease, as summarized in Figures 3 and 4, below. 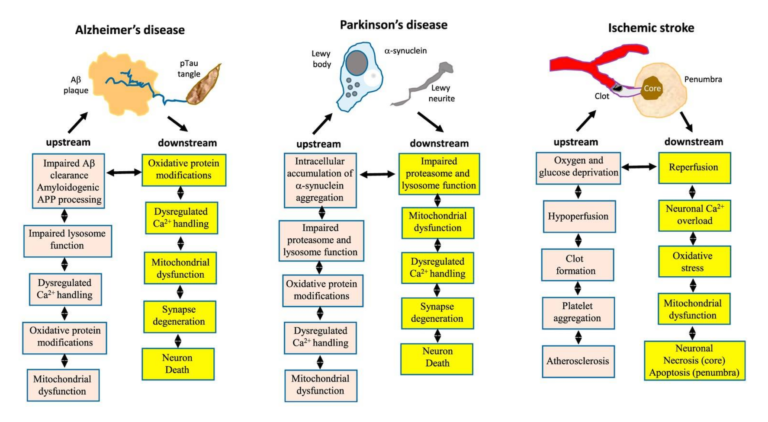 Figure 3: The hallmarks of brain aging likely contribute to or increase neuronal susceptibility to the physiological defects associated with Alzheimer’s, Parkinson’s, and stroke. 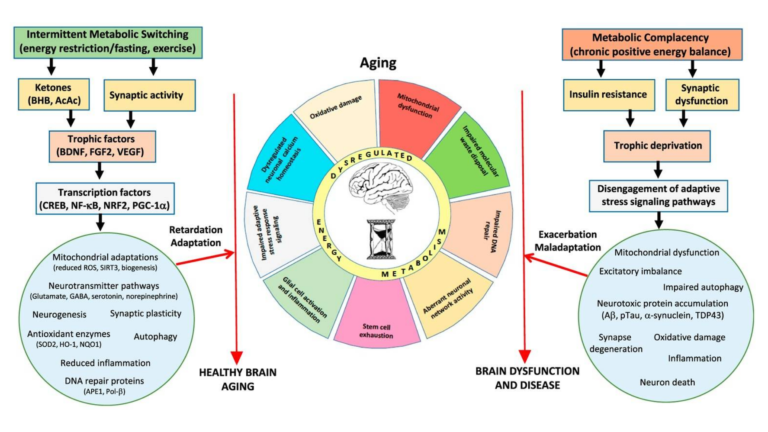 For example, amyloid beta plaques are widely implicated as the cause of Alzheimer’s disease, but there are both significant elderly populations that have high amyloid levels but do not have Alzheimer’s and populations that have low amyloid levels and do suffer from the disease (13). The review authors argue amyloid accumulation may be a natural consequence of aging, and the hallmarks of aging outlined above create neuronal cells that are susceptible to amyloid-based damage. Similar mechanisms may link Parkinson’s and stroke to these same pathologies (14).

Conversely, both exercise and intermittent energy restriction have been linked to improvements in mental and motor performance and robustness against neurodegenerative disease (18). As shown in Figure 4, the authors hypothesize these intermittent metabolic stressors upregulate cellular clearance and repair measures such as autophagy, DNA repair, and stress resistance and clearance; subsequent refeeding leads to protein production, cellular growth, and restoration (19). This is similar to the “metabolic switch” theory previously discussed on CrossFit.com and indicates intermittent bioenergetic challenges — challenges such as extended exercise or intermittent fasting, which lead to clearance of liver glycogen stores and a temporary reliance on circulating fats as a primary fuel source — repair and support resistance to the factors leading to brain aging and neurodegenerative disease.

Takeaway: Poor metabolic health can be linked, directly or indirectly, to the majority of the biological factors associated with brain aging and neurodegenerative disease. Mechanistic understanding and animal models suggest fasting and/or exercise can slow or reverse the progression of brain aging and disease.