Observational evidence increasingly shows diabetes, obesity, and other forms of metabolic disease are linked to increased risk of Alzheimer’s disease (1), and that patients with Alzheimer’s disease are more likely to be insulin-resistant than peers who do not have the disease (2). Insulin action in the brain promotes synaptic plasticity and memory formation, all of which are impaired in the brains of patients with Alzheimer’s (3). Decreased brain insulin and IGF signaling have themselves been directly correlated with Alzheimer’s disease risk and severity, with brains of patients with Alzheimer’s showing reduced activation of insulin, IGF, PI3K, and Akt-related pathways (4). Reduced cerebral IRS-1 signaling may appear as much as a decade prior to the visible effects of Alzheimer’s, which suggests insulin resistance may contribute to the disease’s cause or progression (5). Additionally, drugs that improve insulin signaling, such as certain antidiabetic drugs and intranasal insulin, have been shown in some preliminary research to reduce Alzheimer’s risk and/or reduce symptom severity (6). 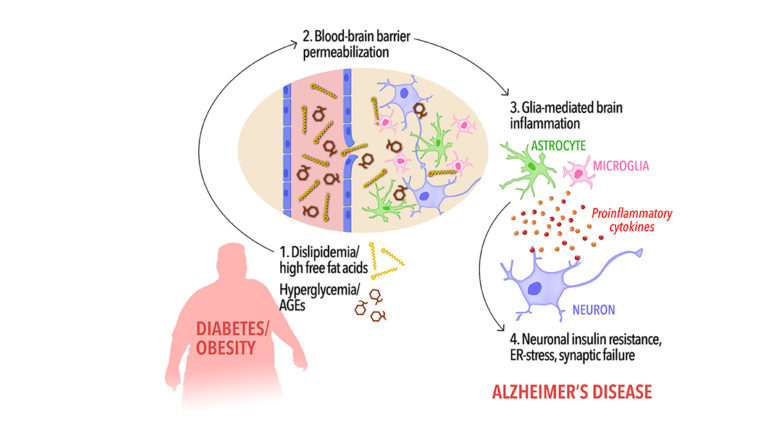 The mechanism by which metabolic disease can reduce brain insulin signaling is not precisely known, as discussed recently on CrossFit.com. These researchers, however, noted insulin-resistance-associated changes in the composition of circulating fatty acids may increase the permeability of the blood-brain barrier to inflammatory cytokines and other factors that impair insulin signaling in CNS cells. Future research is needed to understand how the various changes associated with metabolic disease individually and collectively contribute to reduced CNS insulin signaling.

In sum, the research surveyed here is insufficient to support a direct cause-and-effect relationship between metabolic disease (obesity, diabetes, and the metabolic syndrome) and Alzheimer’s disease, but the correlation is consistent with a causal relationship.