In CrossFit, our specialty is not specializing.

Justin Medeiros won the 2021 NOBULL CrossFit Games with just one first-place finish out of 15 events. He swam, climbed, and biked; he moved fast (but not the fastest) and lifted heavy (but not the heaviest). Of course, Tia-Clair Toomey smashed the women’s field with a litany of event wins, but this perhaps just shows she’s the best non-specialist of them all, excelling in just about everything rather than any specific skill.

But as it turns out, the CrossFit methodology works pretty well for the specialists, too. And it doesn’t get more specialized than the Olympics.

Four swimmers who competed in the 2020 Summer Olympics in Tokyo fell into CrossFit training by mere happenstance after COVID-19 shuttered their training center at Indiana University. But what started as merely a place to train soon morphed into a whole new approach to dryland strength and conditioning.

“One of my favorite things is just the variety in (CrossFit) training,” said Team USA’s Zach Apple. 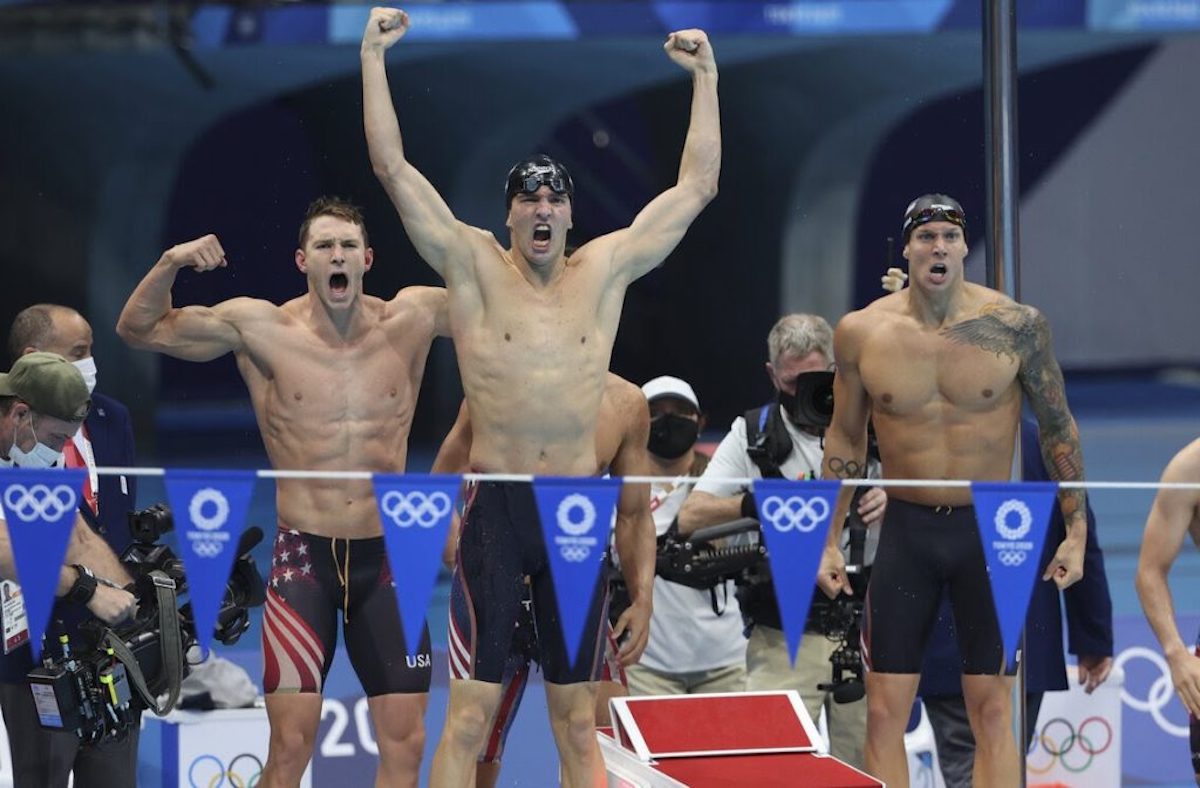 In his debut Olympic performance this summer, Apple, 24, earned gold medals in the men’s 4×100-m medley and freestyle relays. He took fourth in the 4×200-m freestyle relay.

But Apple’s training didn’t just involve variety for variety’s sake. Shaun Tieman — owner of Hoosier CrossFit in Bloomington, Indiana, and now strength-and-conditioning coach to the Olympians — designed the swimmers’ training to mimic the movements they make in the water.

And based on the bling Apple brought home from Tokyo, it worked.

“A big thing in swimming … is your core and being able to rotate around your core and use that to propel yourself,” he explained. “And so it’s very similar in the gymnastics movements on the rings and on the bar, and so I think it’s transferred awesome. It’s something I’ve really enjoyed.”

“I was kind of a little string bean,” Apple said, “and so that helped me a lot. It just kind of gave me the ability to control my body a little bit more.”

Before training with Tieman, King had never done an overhead lift or any sort of kipping gymnastics movement, and her dryland training focused on high-volume lower-body strength work.

The well-roundedness of CrossFit training, she said, helped make her body more “even.”

“It wasn’t as hard on my body as what I was doing previously,” she added. “It was just really nice for me to not be in pain every day.” 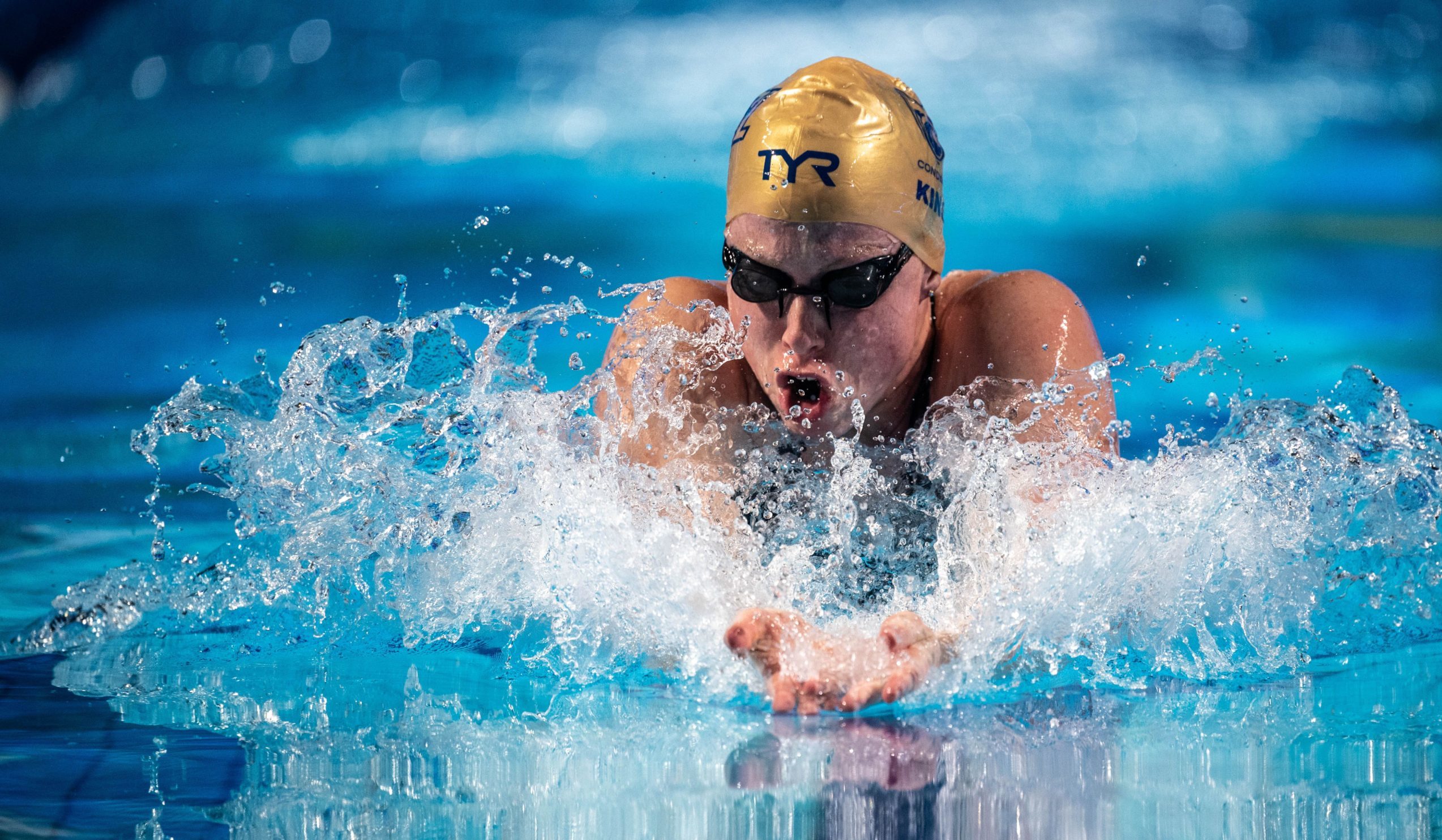 The swimmers weren’t the only 2020 Olympians to accidentally end up in a CrossFit gym.

When Kelsey Harshman emailed Brice Helms, owner of CrossFit Fixx in Tucson, Arizona, she was just looking for a place to train (although the 24-year-old is a member of the women’s Olympic softball team for Team Canada, she holds dual citizenship and resides in the U.S.)

While Harshman competes as part of a team — she plays second base — team members receive individual programming and train alone for most of the year. So when she and her husband moved from Wisconsin to Harshman’s hometown Tucson in late 2020, finding a gym was top priority.

As it happened, CrossFit Fixx was right next to one of Harshman’s favorite cafes.

“And I had a couple friends who had been to classes, and they (said) it was an awesome space,” she said. 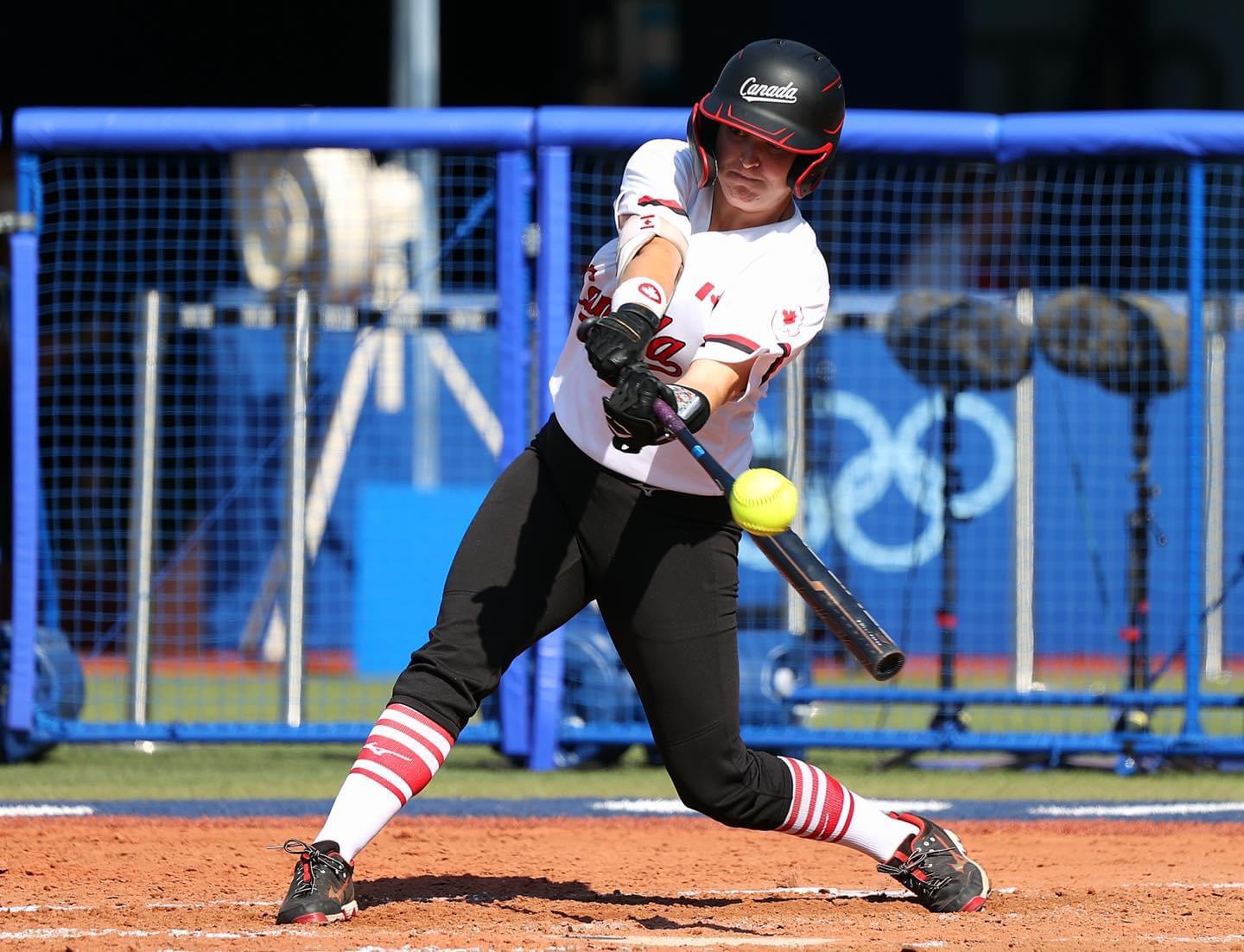 While preparing for the Tokyo Games, Harshman simply used the space and equipment at the affiliate to work through her own programming — a lot of hang cleans, squats, and lateral speed drills.

But it didn’t take long for the classes — filled with regular people of all ages, shapes, and sizes swinging on rings and hoisting barbells overhead — to pique her curiosity.

So she joined the weekend classes at CrossFit Fixx — and was surprised by their intensity.

“Just like, the little circuits that you’re like, ‘Oh, this won’t be that bad,’” she said, recalling a workout involving ring rows and plank holds.

Then, the coach told her it was an AMRAP: as many rounds and reps as possible in 13 minutes.

“Oh, so this is a competition!” she thought to herself.

Though Harshman continued to follow her individual, sport-specific training leading up to the Olympics, she joined classes at CrossFit Fixx as much as time allowed. Part of the appeal, she said, was the camaraderie.

“It was just fun to see people be competitive but be cheering each other on still,” she explained. “It reminds me of being in that team environment … . I think it just kind of gives me that extra push.” 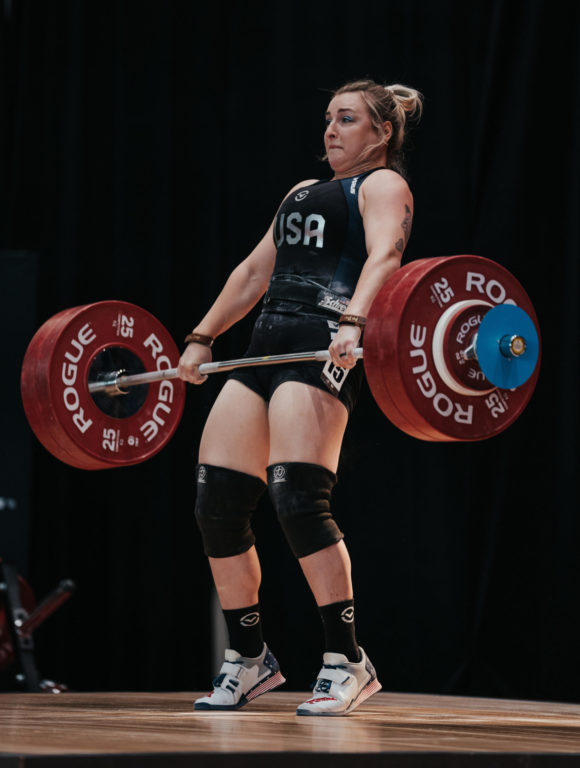 “I love the (CrossFit) community,” she said. “I made a lot of friends when I needed them, and they’re still my friends today.”

Unlike Harshman, King, and Apple, Nye started CrossFit before she became an Olympian. In fact, it was through CrossFit that she discovered her love and aptitude for her chosen sport: Olympic weightlifting.

The now-22-year-old started CrossFit in 2015 after a torn meniscus ended her previous bid for a career in gymnastics. She felt an immediate affinity for the barbell.

“I think that weightlifting was definitely always my favorite part about CrossFit,” she said. “It just made me feel very empowered.”

Shortly after Nye started training at CrossFit DV8 in Rochester, Michigan, she joined the affiliate’s Olympic weightlifting class (she would go on to train at CrossFit Maven, also in Rochester).

“And from there, my Olympic lifting coach just saw some talent in me, and he encouraged me to compete locally and qualify for youth nationals,” she said.

At that time, Nye aspired to compete in CrossFit. Still, in 2016, she took bronze at the USA Weightlifting National Youth Championships.

“So I thought about how, if I was able to get bronze at a national meet without even focusing in the slightest on weightlifting, it made me wonder what I could do if I pursued it full time,” she said.

Quite a lot, as it turns out. In 2019, when Nye was 20 years old, she won the World Weightlifting Championships in the 71-kg category (a non-Olympic division), becoming the youngest female champion in the competition’s history. In Tokyo, she took silver in the 76-kg division, joining the ranks of just three other American women to medal in the sport.

Now training for the next Summer Olympics — Paris 2024 — Nye’s focus remains on weightlifting. But she hasn’t forgotten her CrossFit roots.

“I think the thing I miss most about CrossFit is the community,” she said. “I train alone now, so I do miss having people that you were paired with.”

“I definitely don’t miss Fran lung, though!” she added.

The other Olympians, however, are in it for the long haul. Apple has done Murph twice this year alone, and he and King are both chasing a muscle-up.

“I’m definitely going to continue to do that style of training just because it’s been working,” King said. 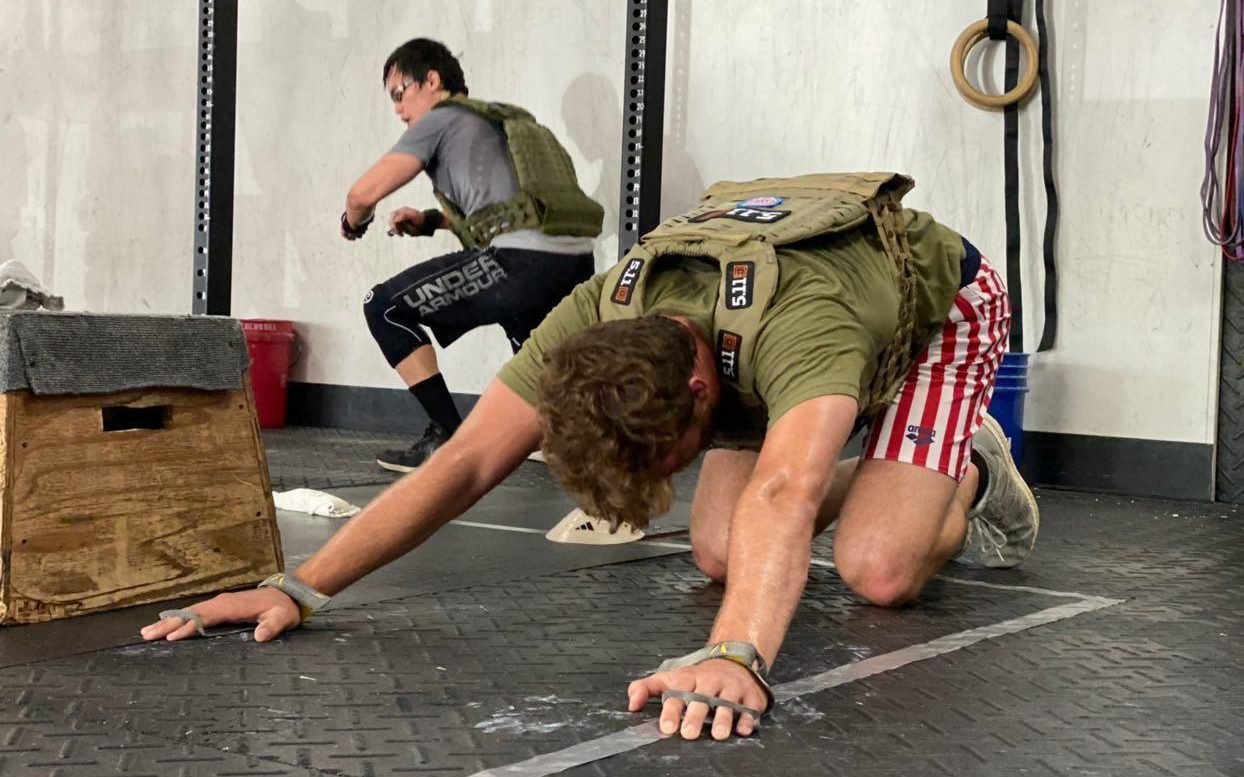 Apple feels the effects of Murph (courtesy of Zach Apple)

And now that Harshman is in the softball offseason, she’s excited to attend CrossFit classes as her primary training program.

“It’s something that I really love doing, because then I don’t have to worry about creating a little workout for me to do at the gym,” she said. “You know, (the coaches are) professionals in this world, so I know I’m hitting all the pieces of my body that I’m supposed to be hitting, and I feel really great after I do it.”

“It’s a great way to stay in shape, and it’s something that I really enjoy.”