The air we inhale from the environment has a fairly consistent composition, and it’s not all oxygen:

Nitrogen is inert and a non-factor in our simplistic explanation here, as are atmospheric water vapor and other trace gases. Oxygen and carbon dioxide are the active ingredients, and oxygen is by far more prevalent in environmental air than carbon dioxide.

Gases move from areas of high pressure to low pressure. It’s why a carbonated beverage can or bottle hisses when opened. The contents are at a higher pressure inside the container, and when the seal is broken some carbon dioxide gas (or nitrogen in some products) dissolved in the beverage inside moves out of solution rapidly and ejects into the air around the can. Over time the carbon dioxide dissolved in the can will drop to the same level as in atmospheric air (0.004%) and the process will end; the beverage “goes flat.” 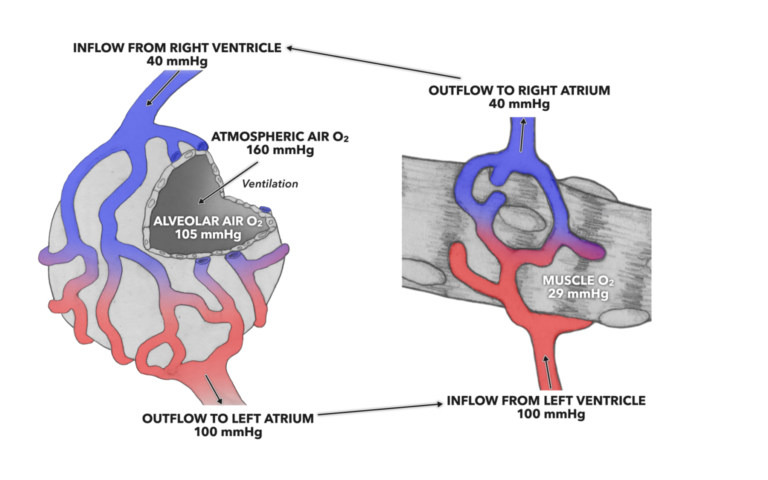 Figure 1: The pressure gradient for oxygen at the alveoli and muscle drives diffusion across the respiratory membrane from the alveolus to the pulmonary capillaries and from systemic capillaries into muscle.

There is an intermediary here that we have to consider: blood. The gases needed for life are carried by and dissolved by blood, and it is the partial pressures therein that facilitate gas exchange. When blood exits the pulmonary alveolar capillary bed, the partial pressure of oxygen is 100 mmHg. That partial pressure is present until the opposite set of gas exchange processes happen at the capillaries within the systemic circulation.

If we consider the partial pressure of oxygen within a muscle cell, we find that it is about 29 mmHg. This sets up a concentration gradient between capillary blood and the muscle cell (100 > 29) and pushes the oxygen out of the capillaries and into the muscle cell.

At this point we need to think about what creates this lower intracellular oxygen concentration. Recollect that cellular metabolism requires oxygen and produces carbon dioxide. If we only consider the derivation of biological energy from a single sugar molecule or a simple fat molecule, we see that lots of oxygen gets consumed and lots of carbon dioxide gets produced:

This is just a single metabolic reaction set working 24/7/365 in the human body. There are well over 500 such reaction series working anabolically or catabolically, all directly or indirectly consuming oxygen and producing carbon dioxide. Combined, these reactions set up the partial pressure gradients at the systemic cell/systemic capillary interface required for gas exchange.

Another chemical feature aids in this process as well. Most people will already know that hemoglobin, a big globular protein in red blood cells, picks up oxygen as it passes through pulmonary capillaries and holds onto it until passing through systemic capillaries. Inside the muscle cell, there is another big globular protein that has an even higher affinity for oxygen: myoglobin. As oxygen offloads from the hemoglobin in the red blood cells within the capillaries into the muscle cell interior, myoglobin hoovers up the new oxygen molecules, keeping the pressure gradient going until all binding sites are full. At the end of this process, the blood will exit the systemic capillary bed, and this is where we began: with this blood destined for the pulmonary circulation and the alveolar capillary beds, ready to start another round of gas exchange.