The lungs are intimately intertwined with the heart and blood vessels in an elegant system of supply and demand. As a key part of the respiratory system, the lungs help process a critical element of life and exercise: oxygen. The circulatory system then helps distribute oxygen throughout the body.

The pulmonary veins deliver blood from the right ventricle of the heart to the lungs and return blood from the lungs to the heart’s left atrium. We can’t see or touch them, but we certainly can feel them when we are training hard.

In most instances, when we are sedentary or going about our day-to-day activities, and even when we are simply being physically active, this elegant system carefully matches the amount of oxygen delivered to the amount consumed — supply meets demand. Under these conditions we are using aerobic metabolism (processes that require oxygen) to supply the energy needed to power these low to moderate levels of physical activity.

During sustained aerobic exercise, our ventilation rate (how many times we breathe per minute) increases by about 300 to 400% to maintain this equilibrium. If we push our exercise intensity higher — running at near sprint speeds or performing some similar increase in exertional effort — ventilation rate can exceed baseline by more than 500%. However, that accelerated rate of air supply cannot provide the aerobic metabolic machinery with enough oxygen to keep pace with exertional demand. As a result, the body transitions to anaerobic metabolism (processes that do not require oxygen). Shortly after the transition to anaerobic metabolism, the body will fatigue, and exercise will have to slow to an aerobic pace or cease completely. Anaerobic metabolism is a short-lived source of power.

No matter what type of exercise we do — whether low intensity (walking or long, slow distance running, for example), high intensity (sprints, lifting, and CrossFit, for example), or any level of exertion in between — the lungs are critical anatomical structures.

Our lungs sit in the thoracic cavity, bounded in front, behind, to the sides, and on top by the axial skeleton. They are bounded below by the diaphragm. As the diaphragm is attached to the contour of the lowest ribs, the lungs can extend no lower. 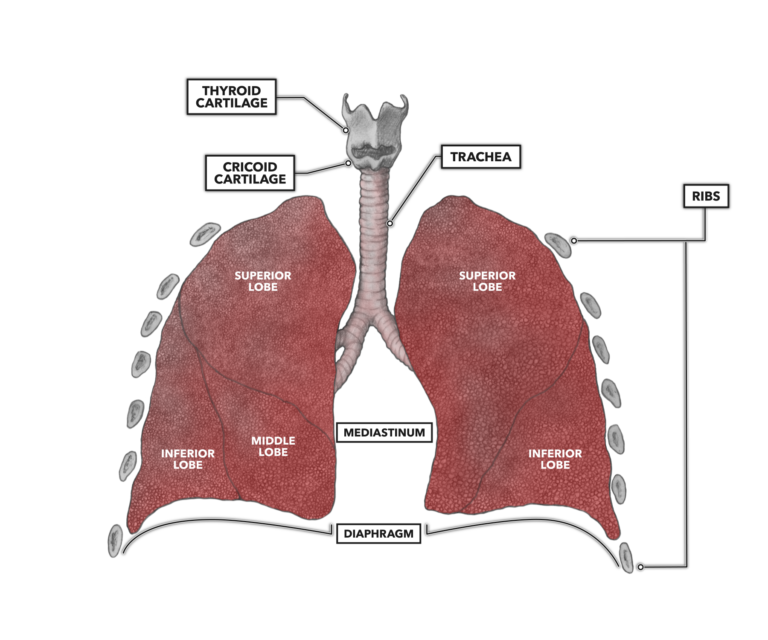 Basic elements of the lungs

Each lung is visibly divided into segments called lobes. Lobes are defined by indentations or creases in the exterior surface of the lung. The left lung has two lobes, and the right lung has three lobes. A lobe provides a structural enhancement that aids in lung expansion during respiration and has a survival function. Damage or disease in one lobe does not necessarily prevent function of other lobes.

The lungs are contained within a membranous bag called the pleural sac. The pleural sac is a two-layered membrane, the outer layer of which is called the parietal pleura and the inner layer of which is called the visceral pleura. A small amount of pleural fluid sits in the space between the thoracic cavity wall and the parietal pleura. The primary job of the fluid is to reduce friction between the wall and the pleura during breathing. Pleural fluid is also important as it provides a degree of surface tension that keeps the lung surfaces in close proximity to the inner walls of the chest cavity. Thus, when the chest cavity expands, so do the lungs. As each lung has its own pleural membrane, they are somewhat independent of each other. This is a pretty useful survival asset. If the chest and one lung are punctured on one side, the other lung is still able to function. However, while breathing may be achievable, it will be extremely uncomfortable and physically limiting, as half the body’s respiratory capacity has been compromised.

The lungs have a space between them called the mediastinum. Within that space are the heart, thymus, lymph nodes, esophagus, stored fat, and the trachea. The trachea is the only atmospheric inlet into the lungs.