Borrowed from physics, the idea that all calories are created equal is gravely wrong when applied to biology. In Good Calories, Bad Calories, Gary Taubes lays out an extensive case for why this idea has been disastrous to the field of nutrition. Calories from protein, carbs, and fat are not treated as equals within our body. Each has very different effects on our hormones and ultimately our body composition.

The old paradigm states that consuming more calories than you burn leads to weight gain. It’s summed up as “calories in, calories out,” or CICO (pronounced “psycho,” according to Zoë Harcombe). CICO proponents say weight loss is a simple matter of thermodynamics. In this model, fat is bad because it supplies a greater number of calories per gram than carbs (9 instead of 4 calories).

However, one big piece of the puzzle is almost never talked about: the quality of the calories you burn.

Is Exercise for Weight Loss a “No Rep”?

In spite of its association with good health, scientists have compiled a body of research showing exercise is not very effective for weight loss. In “Why You Shouldn’t Exercise to Lose Weight, Explained With 60+ Studies,” Julia Belluz and Javier Zarracina write:

Consider this review of exercise intervention studies, published in 2001: It found that after 20 weeks, weight loss was less than expected, and that “the amount of exercise energy expenditure had no correlation with weight loss in these longer studies.

Other meta-analyses, which looked at a bunch of exercise studies, have come to similarly lackluster conclusions about exercise for losing weight. This Cochrane review of all the best available evidence on exercise for weight loss found physical activity alone led to only modest reductions.

Sixty studies sounds like a lot, but keep in mind that steady-state cardio seems to be the only type of exercise studied by obesity researchers. Imagine listening only to Nickelback and concluding that music is overrated.

The CICO theory is so entrenched that many obesity researchers have held it as their singular focus. Their collective obsession with burning more calories largely ignores the benefits of higher-intensity exercise. A thousand more studies wouldn’t advance their argument any further if only steady-state cardio is considered.

Let’s examine the possibility that some of the calories we burn are better than others. Feel free to take a seat and ponder that for a minute or two.

In the time spent mulling over the question, you probably burned a calorie just from your resting metabolic rate. Is it fair to say a calorie burned doing deadlifts would have a different effect on your body than the one you just burned while sitting? If we can agree on that, let’s consider what makes some calories better than others.

First off, we should ask, “Better for what?” It’s important to define the parameters here, because the answer would be very different for a professional triathlete, an Olympic weightlifter, or a woman hoping to keep up with her grandkids. There is a distinction between what Coach Glassman calls “functional competence” and “functional dominance.” For the purpose of this article, the “for what” will be optimal health, defined as the capacity to express fitness over a long period of time.

In fairness, a diet for optimal health (functional competence) is possibly different from a diet for world-class performance (functional dominance). Olympic swimmer Michael Phelps could eat a stack of pancakes and then swim for hours, whereas the rest of us would be running laps to the bathroom.

“Intensity is defined exactly as power, and intensity is the independent variable most commonly associated with maximizing favorable adaptation to exercise.”  —Greg Glassman, “Understanding CrossFit”

Intense exercise’s effect on the body is greatly out of proportion with its amount. Brief, intense bursts of activity might account for only a small percentage of your daily caloric expenditure, but these few calories have a more profound effect on your body than anything else you do.

Absolute intensity is measured in units of power, such as watts (joules per second) or kcal/hour. Running a marathon burns a lot of calories, but since this is spread out over several hours, the average intensity is relatively low. If you were to compare the power output of a 400-meter sprint against a marathon, the intensity of the sprint would be much, much higher. 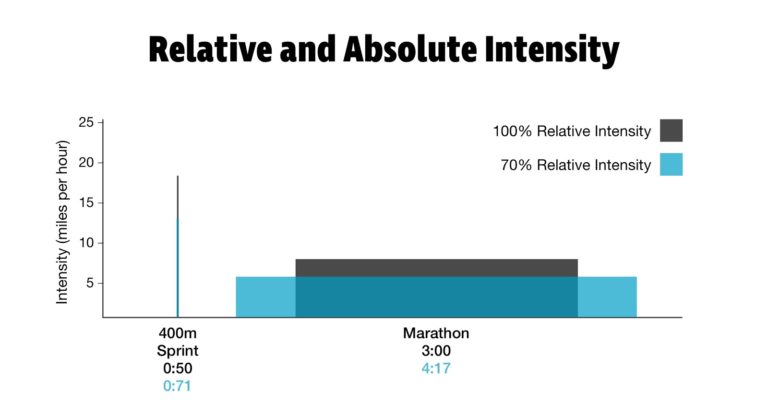 The definition of exercise intensity is a point of great confusion in the scientific literature, where marathon running is often considered the epitome of high-intensity exercise. Here’s an example from a study on cardiovascular risk factors:

A recent editorial proposed that repeated bouts of sustained and/or high-intensity aerobic exercise, such as that required for marathon training and competition, evokes systemic vascular remodelling that shifts the effect of aerobic exercise from cardioprotective to atherogenic.

In terms of absolute intensity, sprinting 400 meters is high intensity and running a marathon is low intensity. Ultramarathon running is even lower intensity, which is not to say it is easier.

Compared to long-duration cardio training, intense exercise can provide similar or greater benefits to our metabolic health in only a fraction of the time. A study on 27 young, sedentary men compared sprint interval training (three 20-second bike sprints with two minutes of slow cycling in between) to moderate-intensity continuous cardio (45 minutes at 75% of max heart rate). After 12 weeks, the researchers found similar metabolic health benefits in both groups: Body fat was reduced, insulin sensitivity improved, and mitochondrial content increased. These results occurred despite a five-times greater duration and volume of exercise in the conventional cardio group. The sprint group only sprinted for one minute per workout!

Clearly, not all calories are created equal when you increase the intensity of exercise. The study utilized cycle ergometers (fancy exercise bikes), and the sprint intervals were not “all-out” efforts. The researchers were interested in studying whether a gentler, more tolerable version of sprint interval training could still be effective for a previously sedentary population. This is in line with CrossFit’s recommendation to establish consistency before increasing intensity.

A Cochrane review mentioned in the “60+ studies” article has something to say about intensity:

Exercise across all levels of intensity improved measures of triglycerides and diastolic blood pressure, but higher-intensity exercise led to greater improvements in serum blood glucose. This review defined high intensity as “greater than 60% VO2max or heart rate.” VO2max is not a very good measure of intensity because it is defined as the maximum volume of oxygen that can be consumed. High-intensity exercise can push well beyond 100% VO2max by tapping into the anaerobic energy pathways (1). For example, one study measured 201% of VO2 peak during a 200-meter run. The definition of high intensity used in the Cochrane review offers little insight into the type of high-intensity training done in a CrossFit box.

There are several methodological difficulties in studying intense exercise. First, exercise differs from diet in that the stimulus is generated by the person being studied. Diet studies surely have compliance issues (as do exercise studies), but there is no such concept as “eating intensity.” On top of that, there is a low ceiling to how intensely a sedentary person can train. I could propose a study examining the effects of single-arm pull-ups on healthy seniors, but for obvious reasons, it would be inconclusive.

One study using a graded exercise test found patients with metabolic syndrome were only able to generate about half as much power on a cycle ergometer as a pro athlete (200 vs. 400 watts)(2). Interestingly, the subjects with metabolic syndrome had blood lactate levels just under 2 mmol/L after the warm-up. Pro cyclists’ blood lactate levels were 0.67 mmol/L after the warm-up and did not reach 2 mmol/L until they reached a power output of 300 watts. 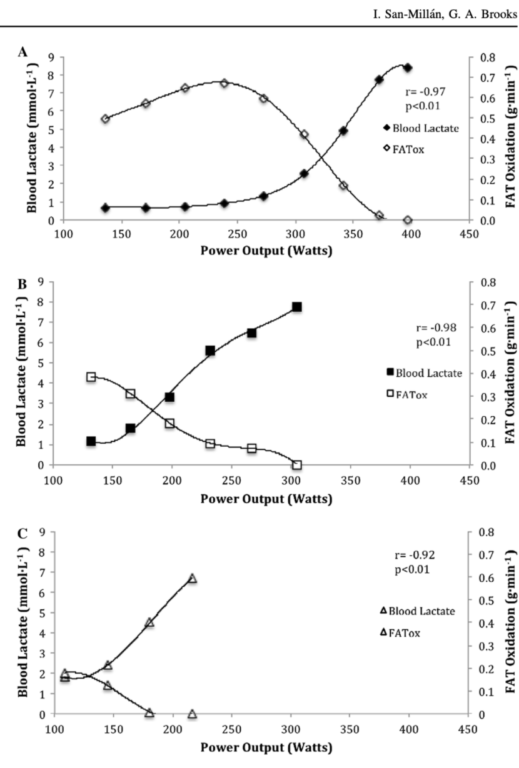 A smart trainer would never push high-intensity workouts on a beginner right away (even if they had the best liability waiver ever written). Doing so would be dangerous and unethical. Most studies only last six to 12 weeks. This is not enough time to onboard a sedentary person, teach the fundamental movements, and ramp up to high-intensity work. CrossFit has proposed the mechanics-consistency-intensity model to guide the development of an athlete. How far in this progression can you take someone in only six weeks?

We all know that just about anything works on an untrained individual for the first six to eight weeks. How much a trainer can improve their client’s fitness after that initial “noob gains” phase is what separates the professional trainers from the clipboard jockeys.

The scientific literature is far from conclusive when it comes to high-intensity training. A few studies have attempted to compare different intensities of exercise while matching for caloric expenditure. In the RUSH study, by Wolfgang Kemmler et al., 81 healthy, middle-aged men were randomly assigned to either high-intensity interval training (HIIT), moderate-intensity continuous exercise (MICE), or a control group. Both training groups performed two sessions per week for the first eight weeks and then increased to three to four sessions per week for the remaining eight weeks.

Each HIIT session was 25-45 minutes. Work intervals ranged widely from 90 seconds to 12 minutes at 85-97.5% HRmax. Active recovery intervals of one to three minutes followed each work interval. MICE sessions were 35-90 minutes of continuous exercise at 65-75% HRmax. Running was the primary movement used in both groups. 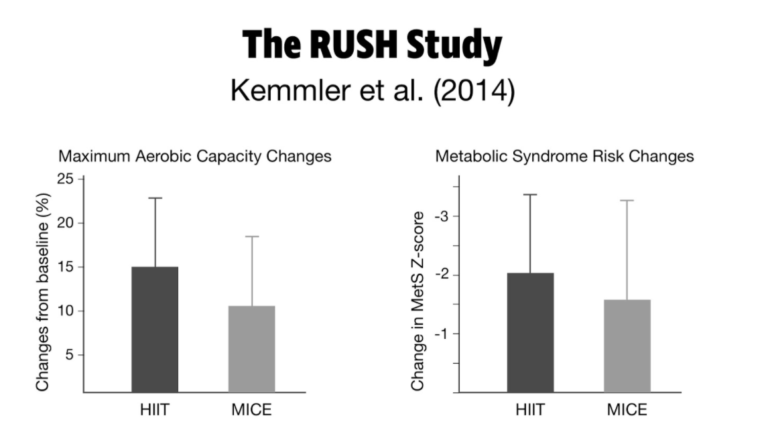 Figure 3: A comparison of the cardiorespiratory and cardiometabolic effects of moderate-intensity continuous exercise (MICE) and high-intensity interval training (HIIT). The HIIT group showed greater improvements in less training time for the primary outcomes.

This study reported both interventions were “comparably effective for improving cardiometabolic indices and cardiorespiratory fitness in untrained middle-aged males.” Although the differences between groups were not statistically significant, the HIIT group showed greater improvements in less training time for the primary outcomes: cardiometabolic risk factors (VO2max test) and cardiorespiratory fitness (metabolic syndrome Z-score).

Another isocaloric study compared the impact of three different 12-week interventions on sedentary, obese men and women. The moderate-intensity, continuous training (MICT) group and high-intensity interval training (HIIT) groups both burned 250 calories in their workouts. A third group (½ HIIT) did the same HIIT workout but for only half the calories.

All three groups trained exclusively on cycle ergometers. The HIIT protocol was eight seconds of sprinting followed by 12 seconds of recovery until either 250 (HIIT) or 125 (½ HIIT) calories were burned. The MICT protocol was to exercise at a constant 70% HRmax for 250 calories. The authors reported the following results:

This result is a bit of a surprise. You would not expect similar results in a group doing only half the work, but it’s possible none of the interventions were particularly powerful. The “high intensity” of the HIIT protocols could have been too limited by the participants’ abilities to generate power. It’s also possible nearly anything would have worked since the participants were completely untrained and deconditioned in the beginning of the study.

It’s Not the Count of Your Calories

It is well known that time must be taken to build up training volume in beginners. Adding more work is a relatively straightforward process. Intensity is a different beast and must be handled with greater care. CrossFit’s mechanics-consistency-intensity model is brilliant for safely increasing the training intensity of functional movements. And this is critical, because intensity is the most potent driver of long-term results.

When shooting for long-term health and performance, aiming to burn the most calories will miss the mark. Rather than counting calories, let’s make our calories count.