Only a specific subset of human movements is optimal for developing human bodies to their highest potential: functional movements.

Functional movements integrate every muscle in the body, radiating from core to extremity to generate incredible power. They represent the most effective way to accomplish real-world physical tasks, such as moving a heavy load from the floor to overhead. Every muscle and all 10 physical skills can be developed together by building your training around a handful of these exercises.

If you are unsure whether a movement is functional or not, a good clue is in the name. If it is named after a muscle, there’s a good chance it’s non-functional. For example, biceps curls, triceps extensions, and calf raises are all named after muscle groups. Functional movements tend to be named after the action they perform and not the body parts involved. Consider the squat, press, or snatch.

Workload and caloric expenditure are essentially looking at the same thing from different perspectives: input and output. Caloric expenditure tells us how much energy the body puts into a movement to output a certain amount of mechanical work. The human body converts roughly 25% of chemical energy from food into mechanical work, but this number varies greatly between individuals and activities. The most energy-efficient form of locomotion ever measured is a human on a bicycle.

Surprisingly, there is not yet a standard method for measuring the energy cost of resistance exercise. Measuring the calories burned by anaerobic exercise is difficult because stored ATP and phosphocreatine are used very rapidly, but these do not register in gas exchange measurements. The true caloric expenditure continues long after the work period ends as the body resynthesizes energy substrates and returns to homeostasis.

In a study measuring the oxygen cost of the deadlift, researchers created a formula that accounted for 83% of the variance in measured oxygen consumption for an estimated workload (distance the bar traveled times the weight and number of reps). This means they could roughly estimate the amount of energy consumed by a deadlifter based on the work performed. They collected data from a group of 42 people of all shapes and sizes performed deadlifts at loads of 20 to 80% of their 1-rep max and in varying amounts of reps. The researchers measured the total oxygen consumed from the onset of exercise until their oxygen consumption returned to within 10% of baseline (averaging 8.7 minutes). Lactate accumulation and other factors might have influenced the results. Furthermore, their work calculation didn’t factor in the body weight of the lifter nor their anthropometry (limb lengths and body proportions).

Studies have shown energy expenditure increases as exercise involves a greater amount of the musculature. Beyond this obvious fact, an accurate formula for calculating the energy cost of resistance exercise eludes us, though we know a variety of factors can influence the results. More experienced lifters can move the same amount of weight with less energy by using more efficient technique. Women tend to use the aerobic energy pathway to a greater degree than men. And efficiency increases at higher rep counts but decreases closer to max-effort loads.

Adapted from Energy cost of isolated resistance exercises across low- to high-intensities. Participants in this study performed each exercise to exhaustion with 80% 1-rep max.

In the previous installment we looked at studies on concurrent training: a hybrid of pure endurance and pure strength training in a single regimen. While the researchers were dismayed that this type of training somewhat interfered with strength adaptations, I made the case that the total amount of adaptation (endurance plus strength) in concurrent training was greater than either pure strength or pure endurance training. Of course, comparing only strength and endurance relies on a  greatly simplified model of exercise adaptation. CrossFit identifies 10 fundamental components of physical fitness. To focus only on two of them leaves a lot of adaptation on the table. 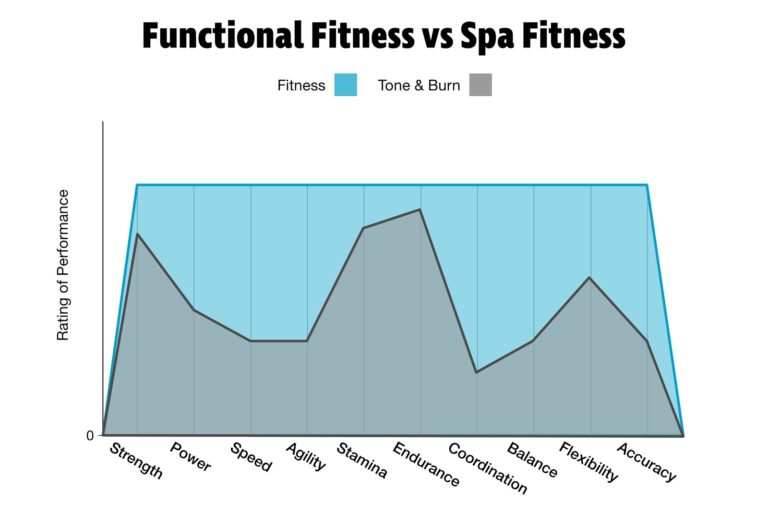 A comparison of two hypothetical athletes. One is trained in the typical health club style (gray), and the other trained with functional movements (blue).

The typical health club “toning and burning” routine primarily targets only three of the 10 qualities of fitness: endurance, strength, and stamina. Running or cycling can definitely build speed and power but not in the “fat burning zone” recommended by cardio machine manufacturers (1). Likewise, strength can be developed using weight machines, but the 15-20 rep range recommended for “toning” primarily builds stamina. Such burning and toning regimens are driven by a compartmentalized model of the human body. Each muscle is to be trained individually and each physical quality developed separately.

Pairing two or three days of cardio with two or three days of resistance training each week is a common training routine for general fitness. This is the type of routine  big box health clubs are designed for. The separation of cardio and resistance training is often imposed by the design of the facilities. It’s not easy to do mixed-modal workouts when you have to bounce between the cardio room and the weight room after each exercise.

A proper health club also requires a dimly lit room with soothing music. That space is often used for flexibility. Some health clubs even have an area with inflatable balls and wobble boards. Nope, that’s not the daycare. It’s the balance training area. An athlete could develop all 10 physical capacities in such a gym, but it would take all day. Let’s hope it’s open 24 hours — and has many rooms.

Why should interior architecture dictate your training style?

Training single-joint movements in a primarily seated position slows the development of more skill-intensive traits such as power, speed, agility, flexibility, balance, coordination, and accuracy. Functional movements scale beautifully across varying intensities and durations, making them suitable for developing either strength or endurance. By moving your body and external objects through space, you develop the skills neglected by seated training: balance, coordination, agility, and accuracy. Developing these skills in isolation is unnecessary when you train functional movements. Is it even possible to develop coordination in isolation?

Non-functional training attempts to isolate a single muscle (2) and work it to exhaustion before moving on to the next muscle. The small amount of muscle involved creates a severe bottleneck that dramatically reduces power output. Thanks to their high power output, functional movements can improve physical skills, such as endurance, that are not typically associated with resistance exercise.

The reason for the disparity in VO2max is interesting, as neither group performed traditional aerobic training. Multi-joint exercises integrate more of the body into a movement, so the cardiovascular system must supply oxygen everywhere simultaneously. This places a much greater burden on the heart and lungs than single-joint training, where only a small region demands oxygen at any time.

The Brutality of Efficiency

Functionality unifies intensity and variety. The intensity afforded by functional movements cannot be attained in any other way. You just don’t see piles of athletes on the ground after a weight machine circuit. Intensity, to the extent it can be tolerated, generates adaptation quickly and efficiently.

While it is possible to train with even greater variety than what CrossFit offers, only functional movements have a broad carryover effect to other movements. In the quest for a high level of total adaptation across all 10 physical skills, it is tempting to add more and more to a routine. This only serves to dilute the training stimulus. Functional movements yield an economy of training that cannot be matched by the entire encyclopedia of exercises.

Junk foods provide plenty of calories while offering few of the nutrients needed for optimal health and performance. We often call them “empty calories.” Likewise, single-joint “junk movements” burn calories but elicit fewer of the beneficial adaptations to exercise. Without challenging our coordination, balance, agility, and accuracy, non-functional movements are an incomplete training stimulus. Non-functional movements are the exercise equivalent of empty calories.