In the previous installment, we examined how varying levels of exercise intensity affect the body in different ways. The studies compared long duration, low-intensity training to brief, high-intensity training. Based on my review of the research, you might think you must pick a level of intensity and stick with it to the exclusion of all others. Life is rarely so straightforward. In the real world, athletes train at many different levels of intensity (even within a single training session).

In any endeavor, there is always a point of diminishing returns. Repeating the same workout over and over again will not continue to yield the same rate of improvement. Progressively increasing the challenge of the training stimulus is the best known way to elicit further adaptation. In a famous story recounted by Cicero, Milo of Croton carried a baby bull on his shoulders every day. Milo’s strength increased as the baby bull grew larger. He eventually became the most famous wrestler of ancient Greece, and we still tell the story of his legendary strength.

The legend of Milo has been popularized to teach the importance of progressive overload, but most Milo fans seem blissfully unaware of the law of diminishing returns. An adult bull can weigh 2,400 lb. Would we all be able to lift an adult bull if we started with a calf? If that were true, why not start with a baby elephant? Surely we’d all be running around with five-ton elephants on our backs! Alas, diminishing returns kick in well before then. Any increase in strength requires a greater amount of training effort to achieve than the one preceding it. At the elite level, athletes train full-time with the hope of adding a few kilograms to the bar per year.

What happens when you try to train for more than one thing at a time? Exercise scientists call this “concurrent training.” Their research has consistently reported that differing training stimuli interfere with one another.

A landmark study in 1980 by Robert Hickson was the first to compare strength, endurance, and simultaneous strength and endurance training. During the 10-week experiment, the strength training protocol took place during 50-min. sessions five days per week and the endurance training consisted of six days with 40-min. sessions of either high-intensity cycling or continuous running. The concurrent training group did the workouts of both groups, separated by a few hours of rest. The order of training was not noted in the paper.

The results of this study suggest that there is little or no benefit for endurance athletes to strength train at the same time; and furthermore, it might be deleterious for strength athletes to perform strenuous endurance activities simultaneously.

Had the study been a few weeks shorter (or perhaps longer), we might not be discussing interference effects but rather “interference miracles.” 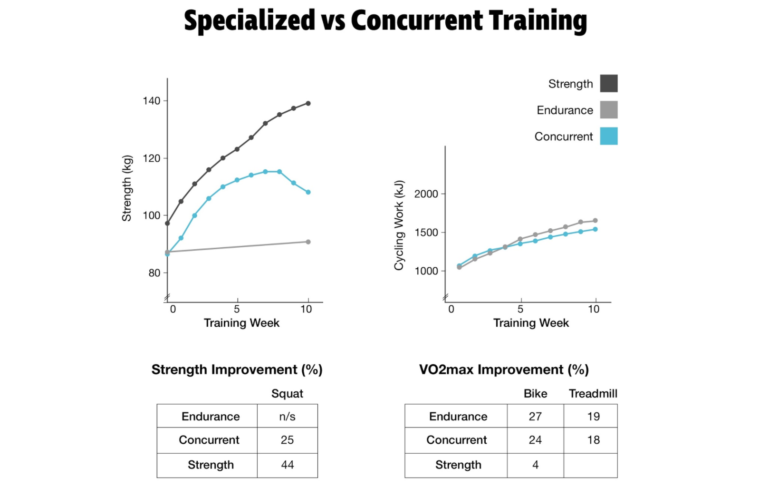 Adapted from “Interference of Strength Development by Simultaneously Training for Strength and Endurance” by Robert Hickson (1980).

Some speculate strength and endurance adaptations interfere with one another at the muscle fiber or even cellular levels. However, it’s also possible that training 11 times per week might have caught up with the participants in this study. It could have simply been fatigue that hurt their strength gains in the final weeks.

Many studies on concurrent training have been conducted since the 1980 study by Hickson. A recent review summarizes some of the findings:

A meta-analysis of concurrent training studies compared the effect sizes of different training protocols on measures of physical performance as well as body composition. Most of the results were not terribly surprising. Strength training resulted in larger gains in measures of strength and muscle hypertrophy, whereas endurance training led to a greater gain in VO2max. Concurrent training resulted in the greatest loss of body fat and narrowly edged out pure endurance training on improving VO2max (by a statistically nonsignificant amount). 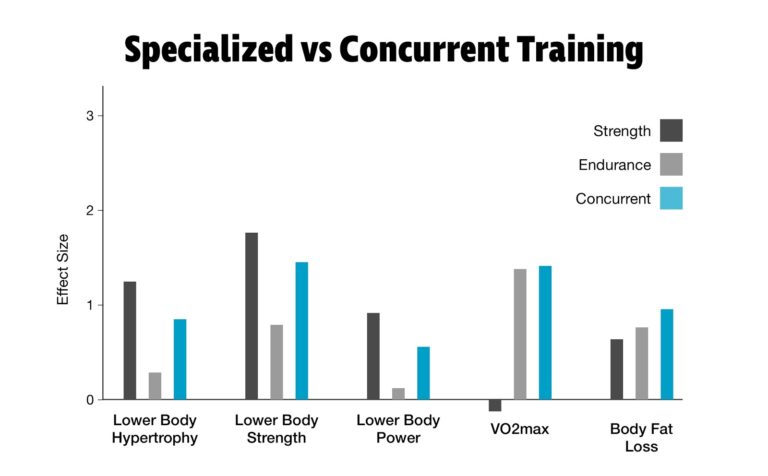 If concurrent training is bad for strength athletes and not necessary for endurance athletes, who is left? I would argue the researchers were perilously close to discovering “fitness.” Their primary interest in the fringes of the physical spectrum blinded them to the middle — where you’ll meet the needs of the vast majority of athletes and individuals.

A key factor in the adaptive process is the scope of the stimulus. A very narrow stimulus, like throwing darts, will result in faster adaptation than a broad stimulus, like mixed martial arts.

With a few hours of dedicated practice, even your uncoordinated aunt Mary will hit a dart board consistently, but she’ll still be hopeless in a fight. After months of practice, she still won’t tap you out in a cage fight, but watch your wallet around the dart board. After a year, her dart throwing will have likely plateaued, but her book club friends will be terrified of her. Stimuli with fast initial adaptation lead quickly to diminishing returns.

Compared to narrowly specialized disciplines (sometimes called “fringe athletics”), a generalist discipline like fitness with an unknown and unknowable number of challenges will result in a broader and greater amount of adaptation.

It wasn’t until CrossFit emerged that people started to seriously consider the ramifications of the question: How can we maximize the total physical adaptation of the human body? The CrossFit Games have proven just how far one can adapt in all directions, a proposition that would be nonsensical to many of the promoters of specialization within the sports community.

Adding Breadth to the Test

One very interesting test of the potential for breadth of adaptation is the Castro Challenge, put forth by Dave Castro, CrossFit’s Co-Director of Training and Director of the CrossFit Games. All three of the following must be completed in a single day:

Individually, sub-5-minute miles and squats with 500+ lb. on the bar are not uncommon. But for them to be attainable by a single person is extremely rare. Add 50 pull-ups to the mix and the Venn diagram converges to a single person. Adam Klink, a CrossFit Games competitor, ran the mile in 4:56 at a body weight of 215 lb. Later that day, he squatted 500 lb. and then completed 50 kipping pull-ups. He’s the only person known to have completed the Castro Challenge thus far.

A mere two days after Klink completed the challenge, Fergus Crawley of Scotland performed a 501-lb. squat followed by a 4:58 one-mile run. Not content to stop there, he then ran a marathon. Fighting against quad cramps and warm weather, he missed his goal of 50 km in under 5 hours. Crawley admitted, “That will be the slowest marathon I’ll ever run.” 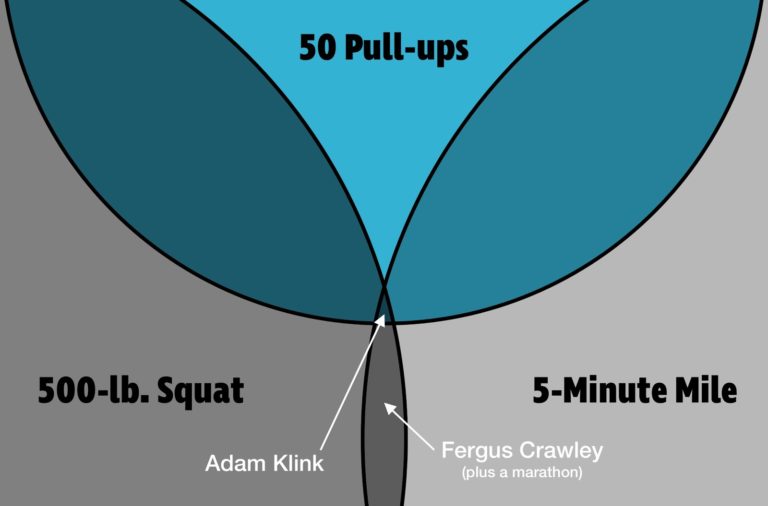 Numerous people have achieved one of these feats. Many high school cross-country runners break the 5-minute mile, for example. Very few people have reached two of these milestones, and only Adam Klink has accomplished all three.

The human body has a finite capacity to eat and metabolize food into energy. The ability to recover from the application of said energy is also limited. Some concurrent training studies may have hit upon that limit. A person cannot maximally benefit from two disparate training programs performed at the same time. Could there be a better approach to maximizing adaptation than simply stacking a pure endurance training program on top of a pure strength training program?

CrossFit is a minimalist approach for maximizing total physical adaptation. If a specialist and a generalist expend the same number of calories, over time the generalist will accrue a greater total amount of adaptation. CrossFit set the standard for this generalist approach, eliciting the most adaptation from every calorie burned. In the next installment, we’ll look at the magic that makes that happen.