Asthma is a chronic inflammatory disease of the airway. During an asthma attack, the respiratory tract becomes narrowed. This may be a survival mechanism — a reduction in airflow to limit lung injury from harmful airborne materials — that has gone awry in some individuals.

Think about how you feel at the end of a particularly demanding WOD, that transient feeling of not getting enough air into your lungs. It is not a comfortable feeling, and that is with your airway maximally dilated and clear. Now consider that feeling and double the discomfort and effort required to inhale and exhale. That’s roughly how an asthma attack feels. And instead of rapidly diminishing with a couple minutes of recovery time, an asthma attack can last from many minutes to several days, with the sufferer not knowing when it actually will resolve.

The most common way to diagnose an asthma attack is to test how much air can be exhaled through a measuring device. A flow meter or spirometer is used to assess how fast one can exhale air over one prolonged breath. An average adult female will have a peak flow rate somewhere in the neighborhood of 385 to 460 liters per minute. An adult male will have a rate somewhere around 485 to 670 liters per minute.

Asthma induces airway constriction that, in many instances, is persistent, present even when there is no perceived difficulty breathing. This means asthmatic flow rates must be based on individual measurements, not on population norms. A 20-50% reduction in a person’s airflow is considered an asthma attack, and a reduction greater than 50% is an emergency. This is a useful scale to keep in mind, but let’s take a deeper look at the basic anatomical changes that produce that reduction in airflow.

The first consideration here is that the trachea, the biggest respiratory pipe in the human body (usually about 2 centimeters or a bit under 1 inch in diameter), has a built-in limitation for how significantly asthma can affect it. The trachea’s reduction in diameter is limited by its cartilaginous scaffolding, which means the lumen cannot be occluded. When an attack begins, the smooth muscle around the trachea contracts, but only the muscular walls between cartilage rings will bow inward a bit and reduce the internal diameter of the lumen. Before an attack the trachea looks relatively smooth. During an attack it looks more like the hose of a vacuum cleaner.

The tubular divisions that branch from the trachea are where the major constrictive issues lie. The bronchi, bronchioles, and respiratory bronchioles are tremendously more susceptible to the effects of asthma.

During an asthma attack the diameters of the bronchi, bronchioles, and respiratory bronchioles get smaller, reflecting roughly the same percentage of reduction noted in flow rate testing. The effect of reducing diameter on the inside area of the lumen (inside of the tube) is profound:

Figure 1: Involuntary smooth muscle contraction drives bronchoconstriction. The more severe the triggered effect, the more profound the diminution of the lumen area. From left to right: a normally functioning bronchi, an affected bronchi at the onset of an asthma attack (20% reduction), and an affected bronchi during a severe attack (50% reduction). 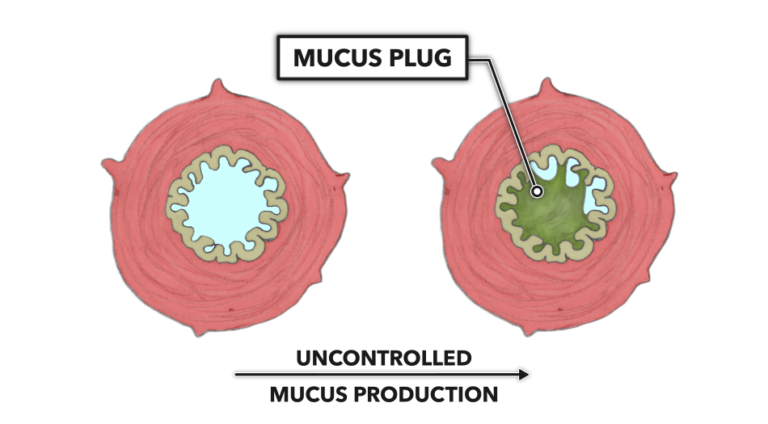 A number of external triggers — such as allergies, inhalation of chemical irritants, or exercise (reviewed in Aggarwal, et al. 2018) — may induce an asthma attack.

It has been reported that as much as 7% of the population has some degree of asthma. This percentage increases among the ranks of elite sports. For example, 15% of the athletes at the 1996 Olympic Games reportedly were diagnosed as suffering from asthma, a rate over double that of the general population. A 2005 analysis of a Scandinavian nation’s elite athlete requests for therapeutic exemption showed 64% of all applications were for asthma-related drugs. Some postulate the legitimate frequency of asthma in elite athletes is the same as in normal populations and that athletes are unscrupulously using the therapeutic drugs as ergogenic aids, as those drugs dilate the bronchi and reduce respiratory work, thereby improving breathing efficiency. However, asthma can be deadly. It leads to about 4,000 deaths in the U.S. annually. Thus, banning therapeutic drugs is not a viable course of action, as it would compromise athlete safety.

The reported incidence of asthma in humans has increased over the past few decades. Many reasons have been proposed for this phenomenon, but regardless of the reason for the increase, coaches and fitness trainers will work with asthmatic trainees and must become cognizant of how to safeguard them in the case of an episode.