The cervical vertebral skeleton serves as an attachment for a large number of muscles that create a complex set of moving connections between the skull, vertebrae, scapulae, clavicles, sternum, and ribs. 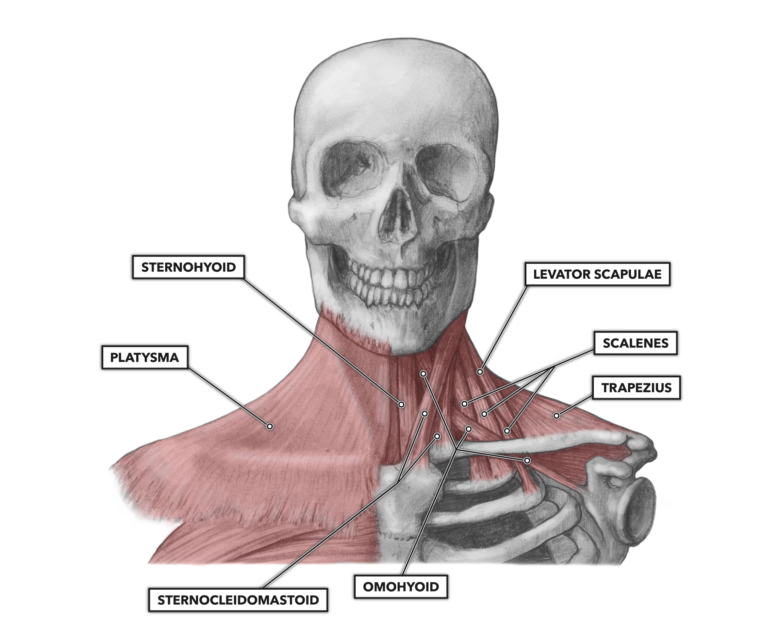 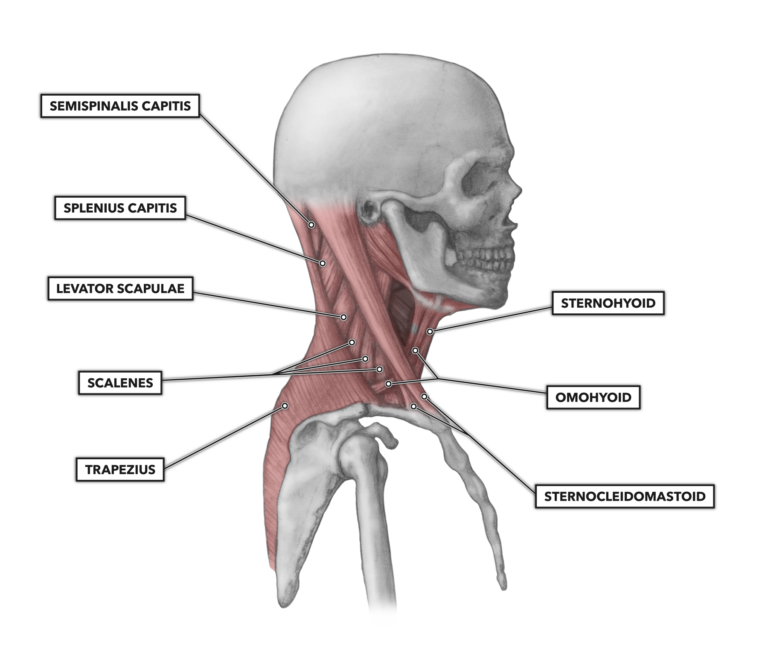 Sternocleidomastoid – This pair of muscles creates the characteristic v-shape rising from the top of the sternum to the rear jawline. The sternocleidomastoid muscle attaches to both the superior sternum and clavicle near the sternoclavicular joint and runs upward. It attaches to the mastoid process just posterior to the acoustic meatus (behind the ear).

This pair of muscles is relatively pronounced in powerlifters who do heavy bench presses routinely, as the muscle is recruited to elevate the chest in order to shorten the distance between the chest and lockout position at the top of the movement.

When recruited unilaterally, the sternocleidomastoid tilts the head toward the activated side of the muscle and can rotate the head so it faces the opposite side. When recruited bilaterally, it flexes the neck or raises the sternum (whichever end is held most stable). This latter action contributes to forced inspiration (voluntarily taking as big a breath as you can). Together, the two sides of the muscle produce movements such as nodding and turning the head.

Scalenes – There are three individual scalenus muscle segments: anterior, medius, and posterior. These segments are attached to the transverse processes of the second through seventh cervical vertebrae and the first two ribs.

Platysma – This muscle pair attaches to the skull at the inferior border of the mandible. It also attaches to the fascia over the lower face, as well as skin fascia lower on the body (over the neck, chest, and shoulders). It pulls the mandible down (opening the mouth) and deforms and wrinkles the skin of the lower face, mouth, and neck (grimacing).

Omohyoid – This pair of muscles arises medially from the inferior aspect of the hyoid bone and attaches distally to the superior and lateral scapula, posterior to the coracoid process. It carries out the same function as the sternohyoid — to depress the hyoid bone — but it is a relatively unique muscle with two muscle bellies separated by a central tendon.

The vertebral column is capable of considerable movement, owing to the extensive number of joints it contains. The cervical vertebrae display the greatest range of movement due to the structure of the atlas and axis under the skull. Combined, the cervical vertebrae are capable of flexion, extension, lateral flexion, and rotation. The musculature here occurs in bilateral pairs, which means the cervical muscles are structured symmetrically across either side of the vertebral column. For example, you have a sternocleidomastoid on the left side of the neck and you have a sternocleidomastoid on the right side of the neck, forming a bilateral pair. This bilateral arrangement, along with separate innervations to each muscle of the pair, allows these muscles to act both together (bilaterally) to produce symmetrical motion and individually (unilaterally) to produce asymmetric movement. 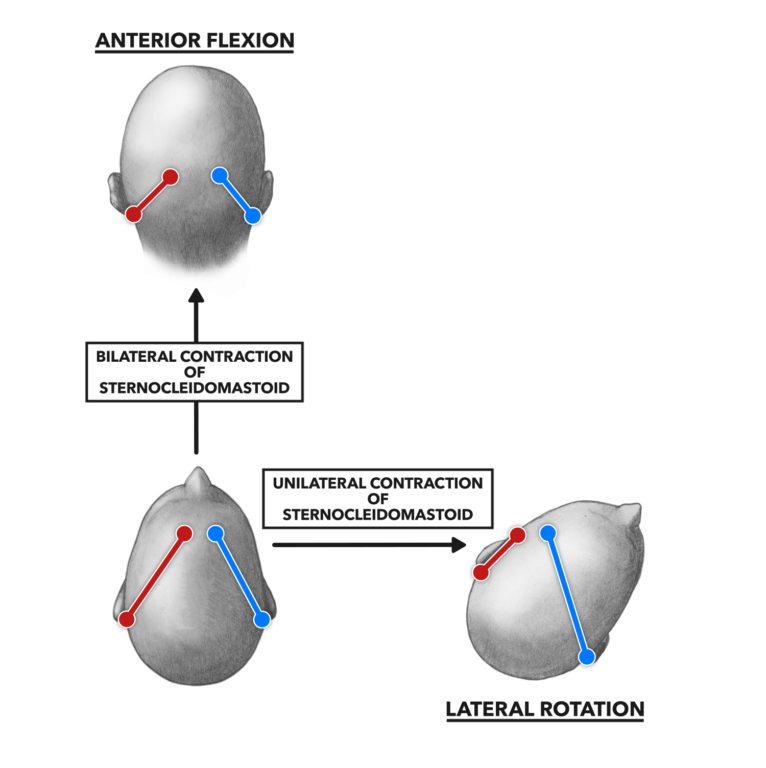 Figure 3: The sternocleidomastoid muscle provides a good example of the separate and combined effects of the muscle pair’s contraction. The two sides of the muscle can provide symmetrical and equivalent support in normal cranial posture, provide bilateral contractile force and flex the cervical vertebrae, or contract unilaterally to rotate the head.

Analysis of what vertebral muscles do is fairly simple. Muscles attaching on the anterior surface of the column will cause flexion. Muscles on the posterior surface cause extension. Muscles used unilaterally produce lateral flexion. Selected recruitment of opposing and complementary individual anterior and posterior muscles will produce rotation. Often you will find that simultaneous contraction of muscle pairs does not produce any motion; rather, it produces joint stabilization through isometric force production.