Larry Thomas has built an impressive resume over the years. After playing collegiate football at McDaniel College in western Maryland, Thomas wanted to continue his work in the fitness realm, so he pursued a career in strength and conditioning. That path eventually brought him to CrossFit, where he has been making a deep mark by helping other athletes and business owners who are seeking to better themselves and their communities ever since. 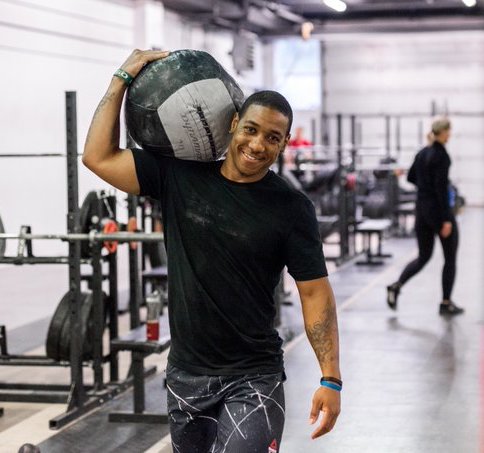 A Level 3 CrossFit Trainer and CrossFit Seminar Staff member, Thomas served as head coach and general manager for an affiliate for several years before making the decision to forge his own path by opening an affiliate.

Thomas affiliated last year — just as countries around the world spiraled into COVID chaos — and he opened the doors to his affiliate, CrossFit Accolade, for the first time the day before election day, last Monday, Nov. 2. He says opening an affiliate was “the intuitive next step” for him because it allows him to “spread (his) wings professionally.” He sees the move as “an opportunity to go and kind of create my own culture and community.”

In addition to “affiliate owner,” during the last year Thomas has added another role to his growing list of responsibilities, or as he would likely refer to them, “opportunities.” In September he became the CrossFit Affiliate Representative for the 370+ affiliates in Maine, Vermont, New Hampshire, Massachusetts, Connecticut, and Rhode Island. He has big aspirations for this role.

“My goal is to talk to everyone who wants to talk to me,” he says. To get started, he reached out to all the affiliate owners in his district to establish an open line of communication and offer support. Many responded to ask questions, tell him about events in their local communities, or just wish him well.

In his time between coaching morning and evening classes, he spends a few hours each day making calls and following up on emails to make sure he’s staying in contact with the affiliate owners in his district, but he hasn’t been completely satisfied with the phone and email route.

“As an Affiliate Rep, we’re all basically responsible for finding our own creative ways to engage our community and just get together with local affiliate owners, and for me, it was instinctively an in-person thing,” he says. So despite the barriers imposed by the pandemic, he has sought to find ways to safely gather fellow affiliate owners.

He spends most of his weekends on the road teaching seminars with the CrossFit Training team, sometimes as part of the teaching cadre for the CrossFit Scholarship Program, but when he has a free weekend, he travels to different corners of his district to create “informal gatherings” for the affiliate owners in the area. “We follow the COVID protocols and all that good stuff relative to that location,” he assures.

At those gatherings, “we get together, work out, and then the goal is that at the end of the workout, (we) cool down, just loosely dialogue. People can talk about sports, their family — if they want to talk business, best practices, profit, whatever it may be, we’re all in the same room, we’re all on the same page, and we can easily have that conversation and dialogue after having sweat together for a little bit.” 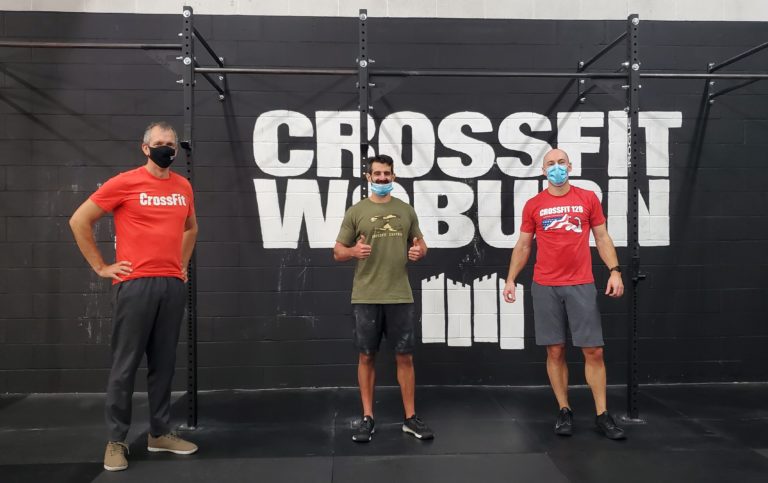 Last Sunday, Nov. 8, he met with a crew at CrossFit Woburn, a box not far from his home in Massachusetts, and he’s in talks with affiliates in New Hampshire, the next location on his list for an affiliate gathering.

Thomas shows his support for his district in other ways as well. When he learns of an important event, he does what he can to help. For example, he spent the day before the affiliate gathering at CrossFit Woburn helping out CrossFit Boston Iron & Grit with Beat the Streets Boston 2020, a fundraiser the affiliate put on in conjunction with the 3 Point Foundation.

The event, which was both a competition for community members and a fundraiser, brought in over US$3,000 in support of 3 Point Foundation’s mission: “To close the opportunity and achievement gap caused by economic inequality for underserved, low-income Boston elementary and middle school youth by providing free community-based programs that integrate project-based learning, athletics, dance, and other activities to foster the development of 21st century skills, social-emotional growth, and a growth mindset — all of which are crucial to future success.” 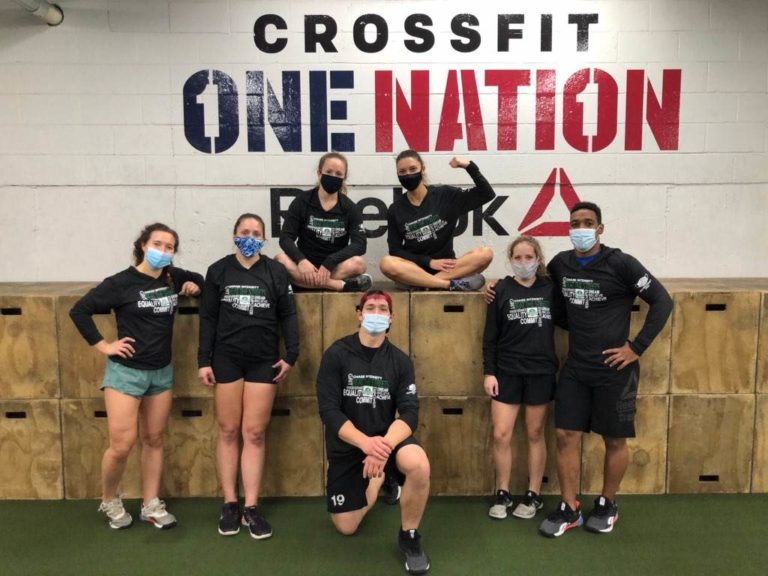 Thomas joined James Hobart and the crew at CrossFit One Nation to complete his part of the competition.

In an 11th-hour pivot, the event shifted formats to accommodate new COVID restrictions the country rolled out only days before the competition. Instead of meeting for a large event all together at Iron & Grit, participants competed at their home boxes and interacted with other affiliates virtually. Thomas dropped into CrossFit One Nation, where he joined in on the competition and competed alongside his friend and colleague James Hobart.

The event gave Thomas a chance to spend time with friends and colleagues in his community, spread the word about a cause that is important to him, and get to know more of the CrossFitters in his district.

For example, Thomas got to meet Elvon, an athlete Iron & Grit owner Tina Ramos has been working with since 2013, when his high-school P.E. teacher introduced the two so Elvon could have a support system and remain active after graduation. 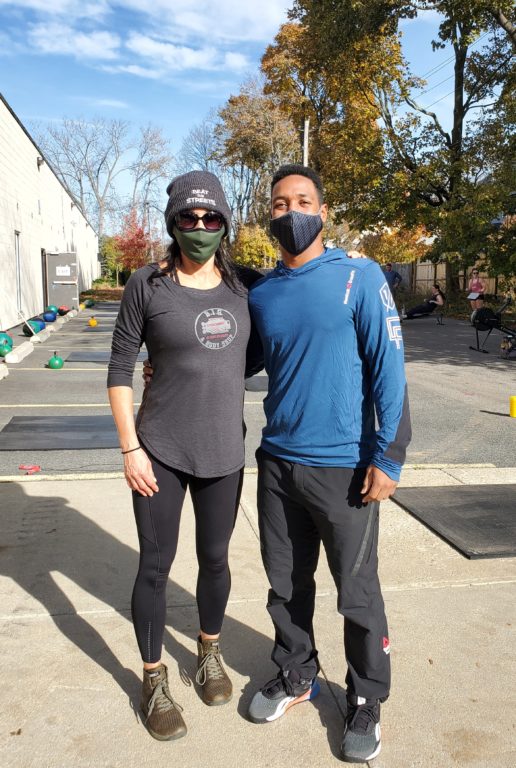 Thomas with Tina Ramos at Beat the Streets Boston 2020

Elvon moved to the U.S. from Saint Kitts to receive medical treatment after suffering a series of strokes as a child. The strokes left him with limited function in his left arm and affected his ability to speak.

“In the beginning I had to explain everything by demonstrating and moving his body into the correct position,” Ramos explains. “It took us 30 private sessions to get him to understand the movements, but the consistency paid off over time.”

“Everyone has taken him under their wing,” Ramos says.

Elvon started picking up new skills as he bonded with the community, and over time he even recovered functionality in his left arm. As he gained confidence, he started asking the coaches at Iron & Grit to teach him more complicated movements, like jumping rope. His next goal: muscle-ups. And last weekend, he competed in the Beat the Streets fundraiser.

“To watch Elvon this past weekend participating in Beat the Streets was very satisfying,” Ramos says. “The same year I met Elvon in 2013 I also met Mr. Jacobs, the founder of the 3 Point Foundation … . I think the significance of Elvon participating in Beat the Streets and helping raise funds for the 3 Point Foundation represents just how a little support can go a long way in helping youth.”

Elvon, now 25, is “in a good community with people who support him and care about him,” Ramos says. “The kids we help through the 3 Point Foundation will also benefit from the strength of the CrossFit community.”

Thomas says CrossFit’s unique ability to coordinate fitness training with community support is what drew him to the methodology in the first place. Reflecting on a recent seminar for the CrossFit Scholarship Program in Nashville, Tennessee, Thomas notes how important it is that this kind of event allows youth in the community to meet people with different life experiences. These events give young people access to a new path so they can “break that mold” or “break that routine” they may be accustomed to while learning about new opportunities, such as coaching others or owning a business, Thomas explains. 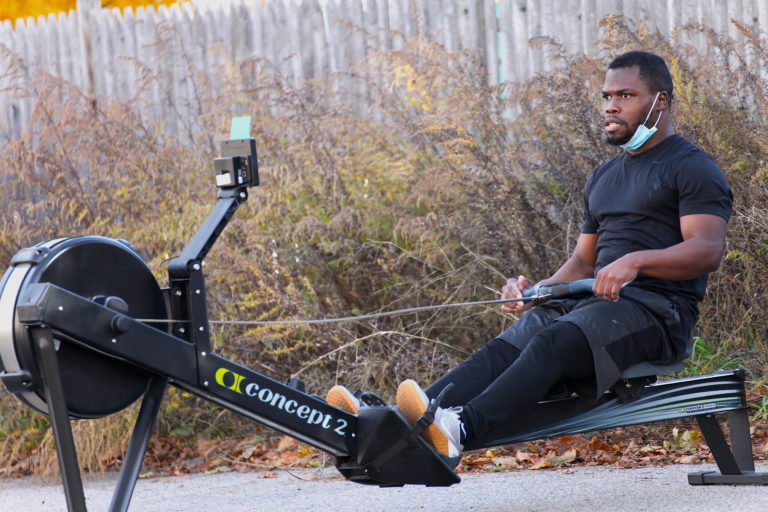 “It’s a great vehicle to reach people where they are. Whatever their goal is, whether it be development as an individual and development as a professional or if they’re trying to help somebody else, there’s a way that CrossFit has already reached that space, and I’m trying to bridge that gap. … That’s what is fulfilling and what motivates me,” he says. “Build that bridge and break down any kind of barriers.”