Autosomal dominant polycystic kidney disease (ADPKD) is a genetic condition in which the kidneys gradually develop cysts. The cysts begin to form in childhood but generally are not detected until middle age, at which point the cysts have become large enough to become symptomatic. The condition is progressive and leads to gradually deteriorating kidney function culminating in kidney failure. Currently, only a single drug has been approved to treat ADPKD — tolvaptan — which slows but does not reverse the disease and has been linked to liver damage.

Mouse studies of ADPKD found rats fed a calorie-restricted diet demonstrated reduced ADPKD disease progression and in some cases signs of condition reversal. ADPKD cystic cells exhibit behaviors similar to the Warburg effect, metabolizing large amounts of glucose through aerobic glycolysis. In other words, these cysts, much like certain cancers, are largely dependent on a supply of glucose — unlike normal cells, which can instead burn fats. Given that in these previous studies, blood glucose levels were not significantly suppressed in mice fed a calorie-restricted diet but blood ketone levels were elevated, the authors of this 2019 study at the University of California, Santa Barbara, hypothesized ketone elevation may slow or reverse the progression of ADPKD.

The authors tested a variety of dietary interventions on rats genetically predisposed to developing ADPKD, each intervention designed to elevate the rats’ serum ketone levels.

Rats were first fed a calorie-reduced diet; in practice, the diet was also time-restricted, as the rats undergoing dietary restriction ate their entire allotment of calories soon after food became available. Rats were separately tested on a time-restricted diet in which food was only available for eight hours each day but the number of calories available was not limited. Both interventions led to “striking” reductions in the growth of renal cysts. While the authors did not quantify the mean impact, the figures shown below are consistent with a clearly visible reduction in cystic area in rats fed a time-restricted diet (TRF) compared to mice maintained on an ad-libitum diet (AL).

When adult rats with existing cysts were fed a ketogenic diet, the ketogenic diet led to a 35% mean reduction in cyst mass — in other words, reversal of disease progression.

To further test the impact of ketone elevation specifically, tested rats were fed a normal diet for five weeks, supplemented with beta-hydroxybutyrate (BHB), which elevates serum ketone levels. This regimen effectively eliminated ADPKD in the rats, and the authors described the rats’ kidneys as indistinguishable from healthy controls. BHB supplementation reversed cyst development, fibrosis, and loss of kidney function associated with ADPKD.

Finally, the authors tested the impact of a 48-hour water-only fast, designed to rapidly elevate serum ketone levels. This short fast led to a 20% reduction in kidney cyst area. 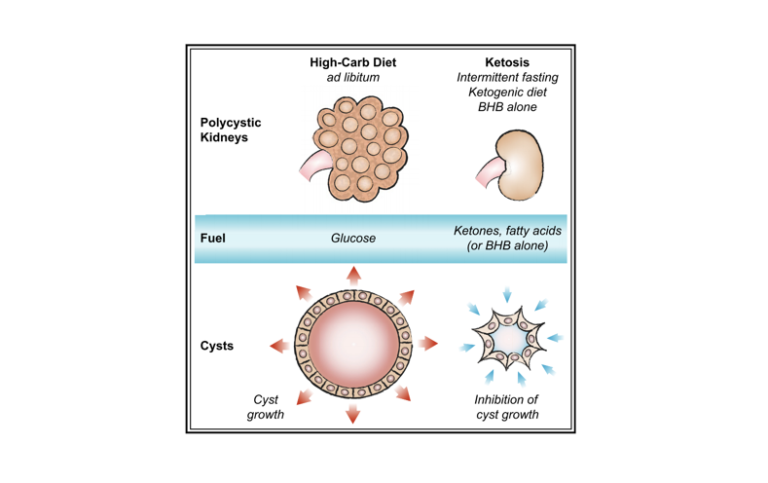 In all trials, the tested rats showed no side effects. No other organs were affected beyond the expected results of these dietary regimens (i.e., loss of liver fat and glycogen stores).

Taken together, these results indicate a variety of dietary programs that induce elevation of serum ketone levels — time-restricted feeding, fasting, a ketogenic diet, and BHB supplementation — each slow the progression of and in some cases even reverse ADPKD. The authors note the magnitude of the effects observed here are greater than those seen in any rat trials of tolvaptan. While the authors rightly caution that these animal model results cannot be directly extrapolated to humans, they suggest one or more of these interventions should be tested in humans with ADPKD, particularly given the lack of feasible alternatives to prevent progression of the disease.

As quoted in UCSB’s release regarding the study:

“The impact of this research has huge implications on the field of PKD,” [lead author] Torres continued. It provides a framework, he said, for understanding the pathology of PKD from a metabolic viewpoint and adds another disease to the list that a ketogenic diet can be used to treat. “Our discovery also has implications for understanding cellular metabolism at a fundamental level as we learn more about what has gone wrong in our disease models.”