In this influential 2009 paper, Matthew Vander Heiden, Lewis Cantley, and Craig Thompson provide an alternative explanation for the Warburg effect. The authors argue that cancer cells rely heavily on aerobic glycolysis, not for reasons related to energy requirements, but rather to create the substrates for rapid cell proliferation. 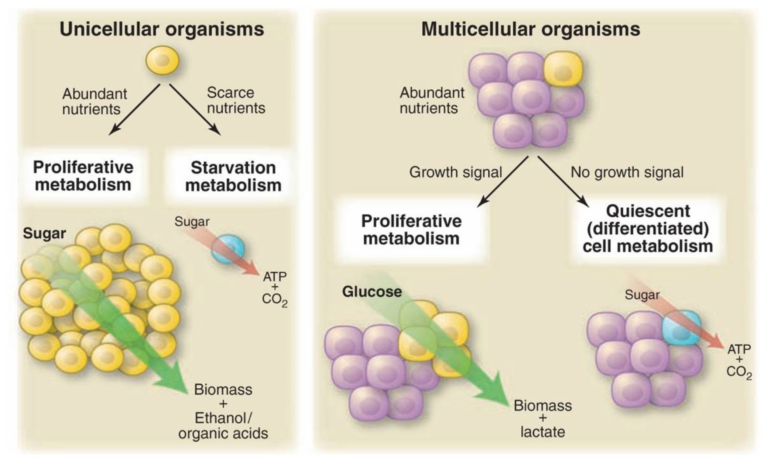 In 1924, Otto Warburg noted that cancer cells, unlike normal tissues, ferment glucose into lactate even when there is sufficient oxygen to support oxidative phosphorylation (i.e., they perform aerobic glycolysis). In other words, cancer cells metabolize glucose, using pathways that generate less energy (ATP) per glucose molecule consumed despite having the resources necessary to use a more efficient process. While the observation is widely recognized, there is no recognized explanation for why cancer cells behave this way. 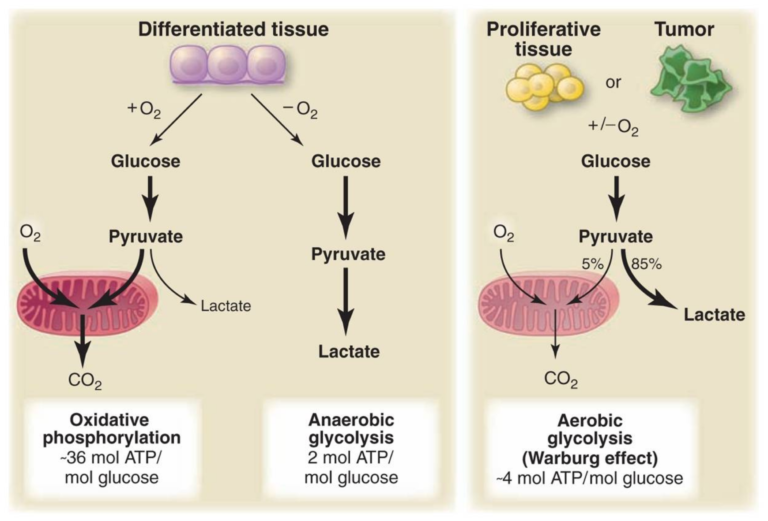 The rapid growth of cancer cells (and closer mechanistic studies) demonstrates that their use of aerobic glycolysis does not prevent them from generating sufficient energy to survive and reproduce. Instead, the authors argue, the more pressing constraint on proliferation may be the production of the nucleotides, amino acids, and lipids necessary to replicate the entire contents of the cell before mitosis. While production of these raw constituents of growth, such as palmitate and amino acids, require some ATP, their requirements for carbon and other substrates are greater relative to what glucose can provide.

As an example of these requirements: “to make a 16-carbon fatty acyl chain, a single glucose molecule can provide five times the ATP required, whereas 7 glucose molecules are needed to generate the NADPH required.” In other words, if the majority of glucose is committed to ATP production, the cell will have insufficient substrate to rapidly replicate its contents and proliferate. This is true for a variety of molecules, as glucose and glutamine “supply most of the carbon, nitrogen, free energy and reducing equivalents necessary to support cell growth and division.” 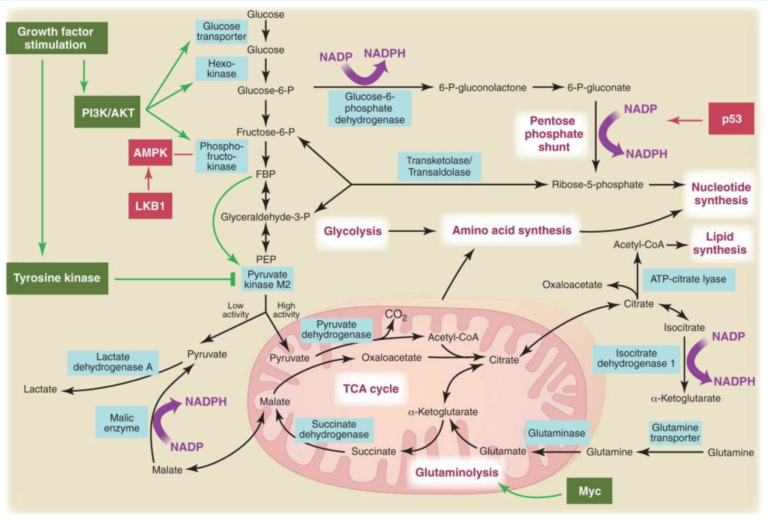 Figure 3, Metabolic pathways active in proliferating cells are directly controlled by signaling pathways involving known oncogenes and tumor suppressor genes. This schematic shows our current understanding of how glycolysis, oxidative phosphorylation, the pentose phosphate pathway, and glutamine metabolism are interconnected in proliferating cells. This metabolic wiring allows for both NADPH production and acetyl-CoA flux to the cytosol for lipid synthesis. Key steps in these metabolic pathways can be influenced by signaling pathways known to be important for cell proliferation. Activation of growth factor receptors leads to both tyrosine kinase signaling and PI3K activation. Via AKT, PI3K activation stimulates glucose uptake and flux through the early part of glycolysis. Tyrosine kinase signaling negatively regulates flux through the late steps of glycolysis, making glycolytic intermediates available for macromolecular synthesis as well as supporting NADPH production. Myc drives glutamine metabolism, which also supports NADPH production. LKB1/AMPK signaling and p53 decrease metabolic flux through glycolysis in response to cell stress. Decreased glycolytic flux in response to LKB/AMPK or p53 may be an adaptive response to shut off proliferative metabolism during periods of low energy availability or oxidative stress. Tumor suppressors are shown in red, and oncogenes are in green. Key metabolic pathways are labeled in purple with white boxes, and the enzymes controlling critical steps in these pathways are shown in blue. Some of these enzymes are candidates as novel therapeutic targets in cancer. Malic enzyme refers to NADP+-specific malate dehydrogenase [systematic name (S)-malate:NADP+ oxidoreductase (oxaloacetate-decarboxylating)]. From Understanding the Warburg Effect,The Metabolic Requirements of Cell Proliferation.

Thus, the authors posit, glucose and glutamine metabolism in a proliferating cancer cell is designed to maximize production of cellular building blocks rather than energy production. The proliferative state is thus “turned on” by a simultaneous increase in nutrient acquisition by the tumor cells and a shift toward metabolic pathways that support proliferation.