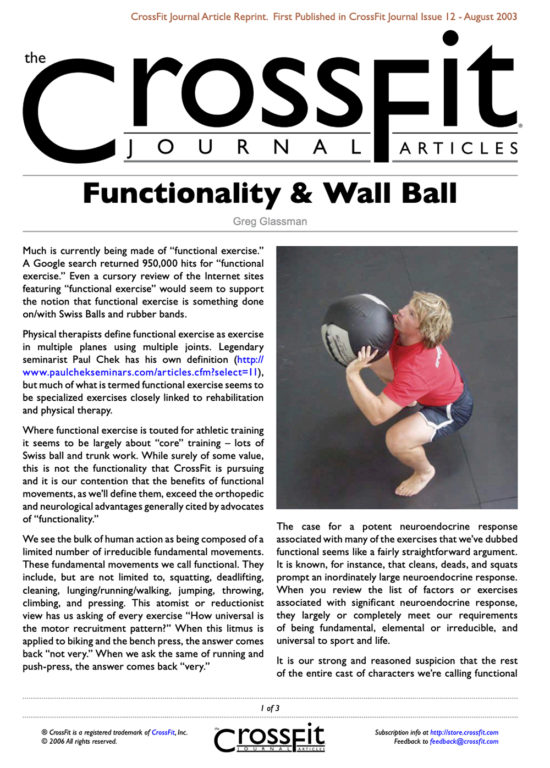 Where functional exercise is touted for athletic training it seems to be largely about “core” training – lots of Swiss ball and trunk work. While surely of some value, this is not the functionality that CrossFit is pursuing and it is our contention that the benefits of functional movements, as we’ll define them, exceed the orthopedic and neurological advantages generally cited by advocates of “functionality.”

We see the bulk of human action as being composed of a limited number of irreducible fundamental movements. These fundamental movements we call functional. They include, but are not limited to, squatting, deadlifting, cleaning, lunging/running/walking, jumping, throwing, climbing, and pressing. This atomist or reductionist view has us asking of every exercise “How universal is the motor recruitment pattern?” When this litmus is applied to biking and the bench press, the answer comes back “not very.” When we ask the same of running and push-press, the answer comes back “very.”

It is our strong and reasoned suspicion that the rest of the entire cast of characters we’re calling functional will eventually be demonstrated to be responsible for evoking a significant neuroendocrine response. That is, we contend that the pull-up, dip, box jump, running and the like, used in the manner in which we use them, are making large systemic contributions to overall fitness. This view, while novel, if not revolutionary, takes a back seat to a second CrossFit suspicion that is truly revolutionary.

First, elite runners, cyclists, swimmers, or triathletes crumble when exposed to simple CrossFit-like stressors and their failure is obviously cardiorespiratory. Second, our athletes are increasingly doing very well in competitions based on skills and activities for which they’ve little or no training.

Run, press, jump, throw, squat, deadlift, lunge, climb, and clean in all three metabolic pathways in varying combinations, at high intensity, and you’ll be at most several weeks out from good to great performance (strength and conditioning wise) for nearly any sport or activity.

The claim here is that regimens like our WOD are ultimately a better cardiorespiratory prep than cycling or running for any sport except cycling or running. In fact, the advantage extends to all ten general physical adaptations (cardiorespiratory endurance, stamina, strength, power, speed, flexibility, agility, accuracy, balance, and coordination).

The cardiorespiratory benefit of mixed modal, high-intensity functional movements, a la CrossFit’s WOD, is a better, more useful, broader cardiovascular stimulus than any monostructural activity like biking, swimming, or running—even in combinations.

The clear implication in light of our view of athletic training and more conventional practices is that the most efficacious tools available for metabolic conditioning are not generally employed. Until training regimens incorporate traditional resistance training protocols (weightlifting and gymnastics/calisthenics) to replace or supplement traditional “cardio” modalities (bike, run, swim, etc.), athletic conditioning remains inferior.

As an example of high functionality and marked carryover of cardiorespiratory benefit to sport and human performance in general, we offer our “wallball” exercise. This exercise is largely a front squat and push-press combination. The functionality of throwing or shooting an object from overhead and standing up is hopefully obvious. 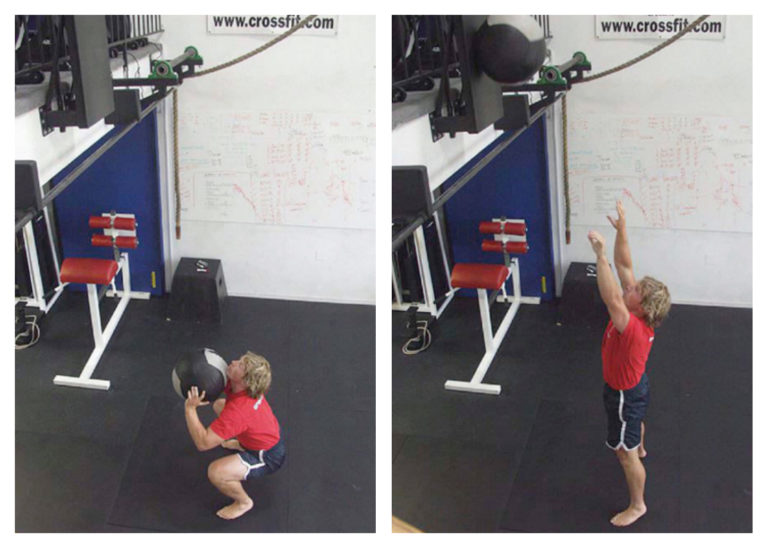 We use a 20-pound Dynamax Medicine Ball and a flat vertical target (originally the wall and hence the name) located about 8-10 feet above the ground.

The movement begins as a front squat and follows through to a push press/shove that sends the ball up and forward to the target from which it rebounds back to the throwers outstretched arms where it is “absorbed” back into the squat. In its entirety the wall-ball is quite simply a throw.

When perfected, each shot looks identical to the one before, and the ball’s contact and departure are gentle and smooth. If the athlete endeavors to quiet the drill, the benefit to mechanics and breathing technique are immense.

The drill can be made as difficult as needed by increasing the weight of the ball, moving back from the target, or raising the target.

On failure (falling behind), rest and try again. Over time you want to get where you can do 150 shots in 6 minutes or less.