In this 2018 review, Valter Longo et al. discuss the current evidence supporting the use of fasting and/or fasting-mimicking diets in cancer therapy.

A fasting-mimicking diet (FMD) is a three- to five-day diet of water, vegetable broths, soups, juices, bars, herbal teas, and supplements. The diet is designed to drive a metabolic response similar to starvation without requiring a water fast. In healthy subjects, the FMD leads to significant reductions in insulin and glucose levels, IGF-1, and leptin, as well as increased adiponectin and ketone levels. A minimum of 48 hours of fasting or FMD is required to achieve clinically meaningful effects, and the FMD allows these effects to be achieved more consistently than true fasting, which involves greater risk and a reduced probability of compliance. In healthy subjects, five-day FMD cycles are well-tolerated; preliminary feasibility studies in self-selected cancer patients suggest they do not induce any significant side effects and may improve quality of life.

An FMD is unlikely to have a significant impact on cancer progression as a sole or primary therapy but may increase the effectiveness of other therapies when delivered simultaneously. The proposed general mechanism for this change is the differential stress response triggered by an FMD (see Figure 1 below). The FMD leads to a variety of metabolic changes (many downstream of the reduced IGF-1 activity it causes) that slow ribosome biogenesis and other proliferative activities within healthy cells, changes that increase cells’ resistance to chemotherapeutic drugs. Cancer cells, due to consistent deficiencies in their metabolic function, are unable to respond in this way and in fact often upregulate a variety of proliferative genes in response to fasting or an FMD. Reduced blood glucose availability also drives cancer cells to shift from aerobic glycolysis (as noted in the Warburg effect) to mitochondrial oxidative phosphorylation, which increases oxidative stress. Taken together, these effects simultaneously increase the impact of chemotherapy and radiotherapy on cancer cells and decrease their impact on healthy cells. Human data showing these effects is limited, but a variety of preclinical mouse studies collectively show that fasting and FMDs can potentiate chemotherapeutic damage and reduce tumor growth in mouse cancer models. 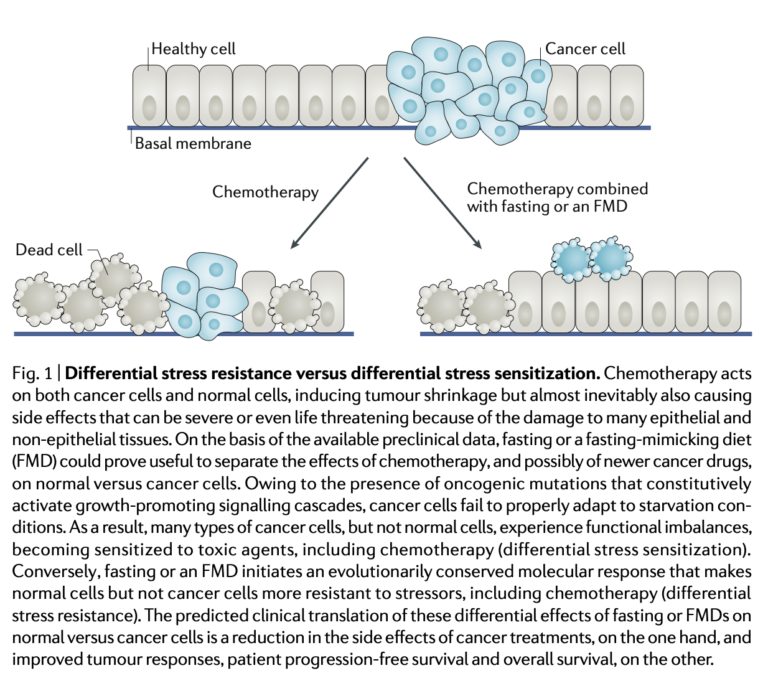 FMDs also may counteract the drawbacks of particular chemotherapeutic agents. For example, mTOR and PI3K inhibitors both lead to hyperglycemia as a side effect, which counteracts their target function (i.e., suppression of metabolic pathways in the cancer cells) and leads to additional systemic damage. An FMD (or any other glucose-suppressing diet, such as a ketogenic diet) can prevent the development of hyperglycemia and increase both the effectiveness and tolerability of these and similar drugs.

The authors also briefly discuss a ketogenic diet and caloric restriction. Chronic caloric restriction, while shown in some studies to reduce cancer risk, has resulted in inconsistent benefits when followed alongside other cancer treatments and carries greater risk of side effects. Ketogenic diets, while inducing much of the same metabolic effects as an FMD, may not deliver the same differential stress response. Additionally, the fasting-and-refeeding cycle unique to the FMD leads to regeneration of immune and bone marrow cells that may be particularly beneficial when delivered in a coordinated fashion alongside chemotherapy (see Fig. 3 below). 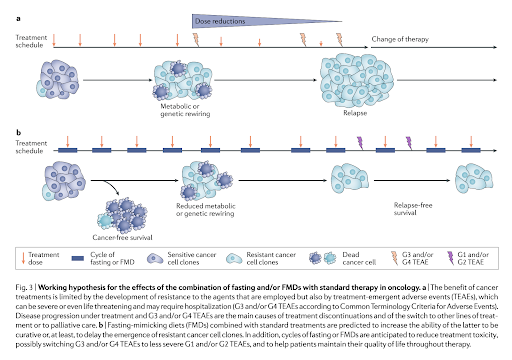 Each of these diets may interact well with specific treatments. For example, recent research by Lew Cantley has shown that a ketogenic diet may increase the effectiveness of PI3K inhibitors.

Collectively, the research surrounding the use of fasting-mimicking diets and other similar dietary interventions as a component of cancer treatment, while remaining preliminary, suggests these diets are frequently tolerable and do not reduce the effectiveness of existing cancer treatments. It remains to be seen whether the promising positive evidence in mouse models, along with the compelling mechanistic support, translates consistently to clinical benefits in humans.