As previously stated, the first logical step in the scientific method is the setting of precise terms for the discourse. Definitions permit the expression of observations, relationships, and processes with the least ambiguity. Precision in definitions allows observations and measurements to proceed with repeatability.

We can consider our foundational definitions as axioms and terms. 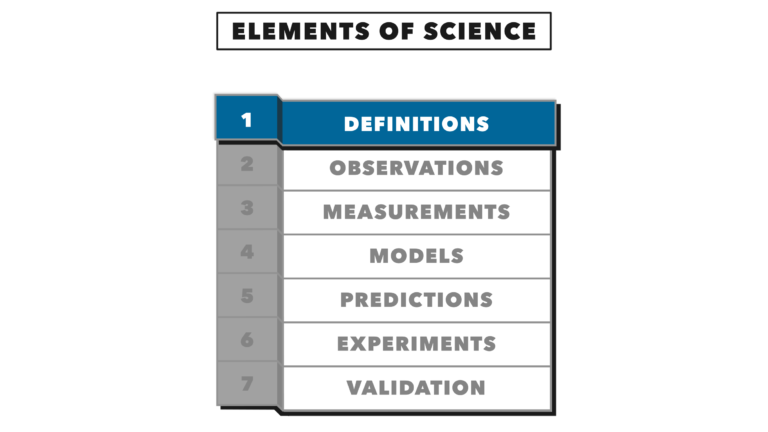 We establish a set of axioms for our understanding of science as an essential element of definition. These axioms, or basic assumptions, define the boundaries of our discourse, tying us to a common understanding within which to communicate. We take each of these statements to be true as premises or starting points for any discussion or inquiry into the nature of science.

Within the framework of definitions, we can also put forth a glossary of terms. We will return to this glossary throughout our exploration of modern science.

Objectivity enables people to share ideas and observations unambiguously. This begins with precision in language and its derivatives. Precision refers to the disciplines of using language with maximum clarity and extracting logic from it. It leads to abstractions and eventual mathematical representation, if possible. In one sense, these are precursors to science, and in another sense, they define the terms of discourse as the first step in science.

Perception is a subjective process, shaped by experience and mood, and highly unreliable. A goal of science is to escape the subjective, replacing observations with measurements, and extending the domain of measurements beyond what is observable to the senses.

Fortunately, we can use our brains in concert with others, expanding our perception, increasing both its accuracy and its utility. As much as the individual cells of a brain are more powerful when they work as a whole, the collection of our brains is more powerful than any individual brain, as we travel from subjective perception to objective knowledge through repeated practice and application of the scientific method.

Our brains are geared to work in conjunction with one another. We inherited the capacity for language. We either inherited logic with language or we invented it. And we have invented mathematics. These things allow us to communicate unambiguously, or, as engineers say, coherently. If our brains, like antenna elements, are going to work together in synchronism and with efficiency, our first order of business must include precision in the use of language.