All the seeds of the scientific method lie within the derivation of science (which is the method’s application). The scientific method consists of a set of attributes that can be neatly organized into four major categories: foundations, discovery, creativity, and validation. 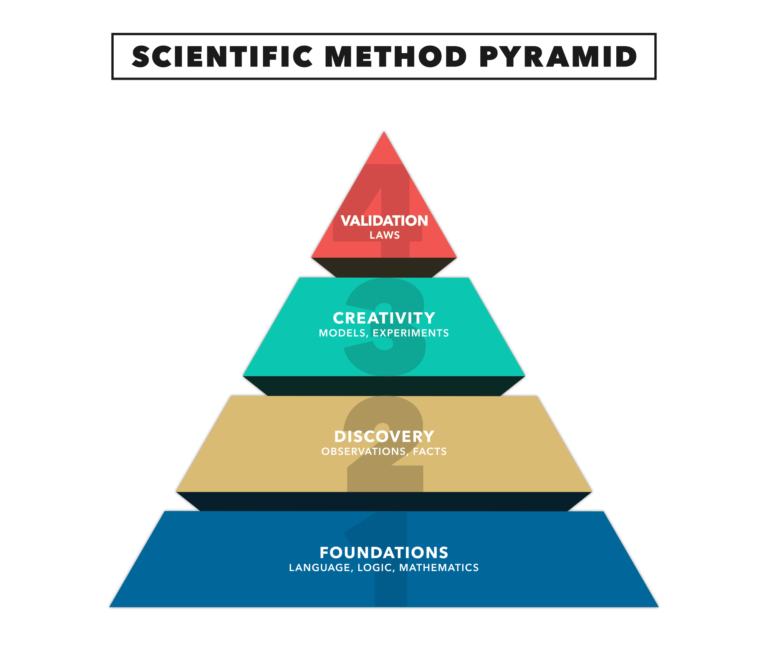 Foundations of science include natural language and its derivatives of logic and mathematics. These permit the expression of observations, relationships, and processes with the least ambiguity. Precision in definitions allows observations and measurements to proceed with repeatability. Mathematics, which is solely based in a labyrinth of logic and definitions, allows science to explore the full consequences of its models. Mathematics leads science into new territories from the mental constructs called models.

Discovery is the art of making observations and measurements. Measurements, the comparing of observations with standards of like objects and processes, are the backbone of science.

Creativity in science is the extraction of patterns from measurements expressed as models with predictive power. This is the objective of science. Creativity includes the design of experiments to confirm or validate models. (Educators often overlook the strong creative element in science. Perhaps this is an oversight, but it may be due to a belief that nature contains laws simply to be discovered. Science itself holds no such belief. The creation of models from patterns is the art of generalization and the application of the cause & effect principle.)

Validation is the process of gathering data and organizing them to corroborate the predictions of the model. Confirming data increases the accuracy and perhaps alters the scope of the data upon which the scientist has constructed the model. Validating data has the same effect but on the novel predictions of the theory.

These attributes have a logical but not a necessary chronology. Every attribute must be present in a field of study for that endeavor to qualify as a science.

Within these attributes, we fit seven essential elements of science, to be considered in detail in further entries in this series.