The muscles on the back of the arm that oppose the roles of the anterior flexors are few in number, including only the triceps brachii and anconeus. These posterior muscles of the elbow are considered elbow extensors, increasing the angle of the humerus and the two bones of the forearm: the radius and ulna. If the upper and lower arm are in flexion, forming about a 30-degree angle, extension will increase that angle to about 180 degrees (resulting in straight arms). As with other regions, the muscles are layered, but not extensively. 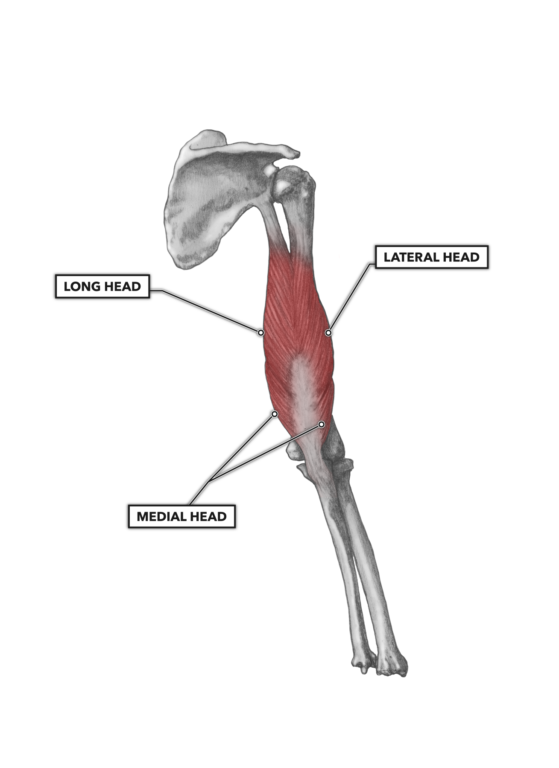 Figure 1: Two heads of the triceps brachii are clearly superficial and easily observable from the posterior. The medial head is mostly deep, under the long and lateral heads, but emerges as it nears the elbow.

Triceps brachii – The triceps brachii, as its name suggests, is a three-segment muscle (tri-) located on the arm (brachii). There are three bundles of muscle making up the muscle body: the long, medial, and lateral heads, each with a separate proximal attachment and shared distal attachment on the ulna. Two heads of the muscle, the long and lateral heads, are superficial. The medial head lies deep to the other two heads, becoming superficial only as it approaches the olecranon (point of the elbow).

The long head, aptly named, attaches proximally to the scapula inferior to the glenoid fossa and distally, via a shared triceps tendon, to the olecranon of the ulna. The lateral head attaches proximally to the posterior humerus from an area just inferior to the greater tuberosity and courses down about a third of the length of the shaft. The medial head lies mostly under the lateral head, attaching proximally to the humerus along a narrow triangle stretching along the lower three-fourths of the humerus. All three sections attach distally to the olecranon process of the ulna via a fusion into an elongated and central tendon.

It is easy to confuse the long and medial heads, as the long head also lies medial along the humerus, but the length of the muscle head is the primary discriminator. Their position, superficial or deeper, can be used for confirmation. 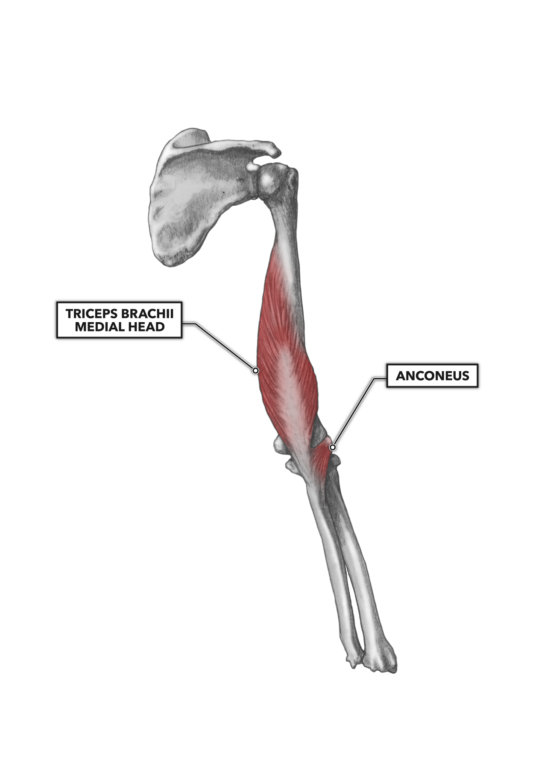 Anconeus – The anconeus is a small, roughly triangular muscle attaching proximally to the point of the lateral epicondyle of the humerus and distally to the olecranon process. It then courses downward a short distance. It is essentially a superficial muscle, but it is also in many ways deep, as its location, immediately spanning the elbow joint, can be obscured by the dominance of the triceps and its tendinous connections. It aligns relatively obliquely across the lateral aspect of the elbow joint. Its small size and unfavorable orientation for torque production suggest it is not a strong elbow extensor, although it does assist. It has a primary function as a supinator and a secondary function as a tension provider to keep the joint capsule taught, thus preventing impingement.