Over the past 40 years, sugar intake (and thus fructose intake) has increased dramatically in Western diets, rising to 15-17% of total daily caloric consumption (1). This rise comes alongside increasing evidence linking fructose to diabetes, fatty liver disease, and cardiometabolic risk factors (2).

Fructose most directly contributes to the accumulation of fat in the liver and thus the development of nonalcoholic fatty liver disease (NAFLD). The liver accumulates fat when its total fat intake — from a combination of circulating fatty acids, dietary fat, and de novo lipogenesis (fat production by the liver) — exceeds the total amount of fat it burns or exports as lipoproteins (as VLDL). Fructose is directly metabolized by the liver in an insulin-independent fashion that increases de novo lipogenesis and the liver’s fat burden. By increasing total fat flux into the liver, fructose increases triglyceride-rich lipoprotein production, leading to a worse lipid profile marked by higher apoB and smaller, denser LDL particles (3). In higher doses, fructose also drives liver fat accumulation. Accordingly, the rise in fructose consumption in the U.S. has occurred alongside an equally dramatic rise in the rates of NAFLD, which has become the leading cause of liver disease in Western countries and directly increases the risk of metabolic syndrome and cardiovascular disease (4). 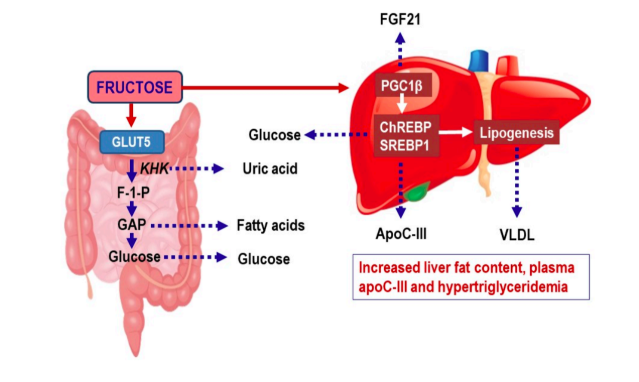 The most compelling direct clinical evidence suggesting fructose plays a causative role in these diseases has come from studies of fructose restriction. Multiple studies have shown that removing fructose from the diet and/or dramatically reducing sugar consumption among children and adults leads to a rapid decrease in liver fat accumulation and improvement of markers of cardiovascular and diabetes risk (6). Weight loss in all forms leads to liver fat clearance, but the impact of fructose restriction (and in some of these studies, carbohydrate restriction) is larger and/or more dramatic than that seen from fat restriction or equal restriction of all calories.

This body of evidence, the authors argue, is sufficient to support the specific restriction of fructose to improve health and reduce risk of metabolic disease, particularly in children and other populations who consume large amounts of sugar-sweetened beverages.