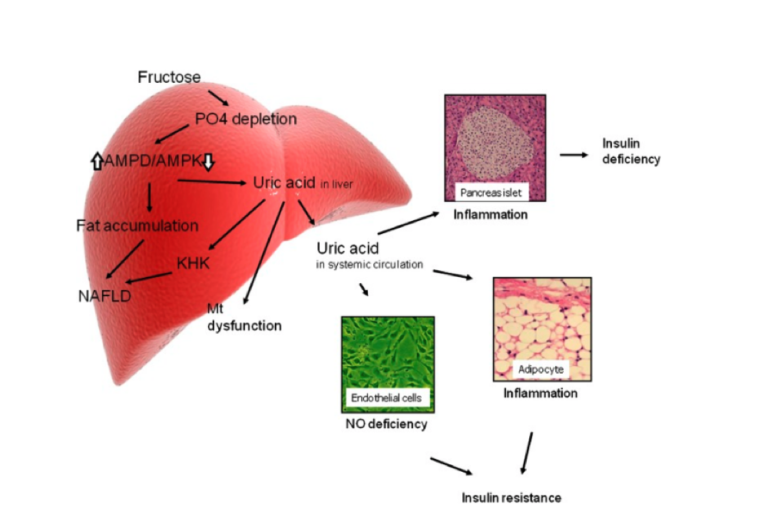 From “Sugar, Uric Acid, and the Etiology of Diabetes and Obesity”: Fig. 3, Uric acid: potential mechanisms for insulin resistance and diabetes.

Richard Johnson et al. review multiple mechanisms by which fructose may uniquely drive progression of diabetes and obesity; that is, several reasons sugar consumption may lead to metabolic damage rather than merely providing “empty calories.” Many of these effects are tied to the fact that fructose (unlike glucose) is directly metabolized in the liver, both increasing liver fat and driving production of uric acid.

The potential mechanisms include: (1) Fructose, through its effects on the liver, may suppress appetite less than other carbohydrates or even stimulate it; (2) Fructose leads to insulin resistance by driving liver fat accumulation and mitochondrial oxidative stress; (3) Fructose inhibits nitric oxide release through its effects on uric acid, preventing glucose uptake by skeletal muscle and so dampening insulin’s ability to moderate blood sugar.

Clinical studies have shown fructose intake leads to features of metabolic syndrome including hypertriglyceridemia, decreased insulin sensitivity, and liver fat accumulation. Uric acid plays a role in at least some of these mechanisms and so could be an intermediary in the harmful effects of fructose on metabolism.

Recent studies show that fructose-induced uric acid generation causes mitochondrial oxidative stress that stimulates fat accumulation independent of excessive caloric intake. ... The discovery that fructose-mediated generation of uric acid may have a causal role in diabetes and obesity provides new insights into pathogenesis and therapies for this important disease.

—Richard Johnson et al., from "Sugar, Uric Acid, and the Etiology of Diabetes and Obesity"

The authors summarize contrary evidence, noting in particular that studies testing pure fructose are clinically irrelevant (as we rarely eat fructose without glucose), and that the negative impact of fructose may not be visible in short-term studies. They nonetheless conclude there is growing evidence for fructose playing a role in the development of metabolic syndrome, as well as fatty liver disease, diabetes, high blood pressure, and obesity.

Read "Sugar, Uric Acid, and the Etiology of Diabetes and Obesity"