On a cold gray December day in Philadelphia, Rodney Blackman got on his bike and rode six miles to coach a class at CrossFit Center City.

“I have an electric bike, so it’s not a lot,” Blackman said, “but I do pedal and I’m kind of sweating.”

Blackman, a CrossFit Level 1 Trainer and graduate of ULiftU, has always been athletic. 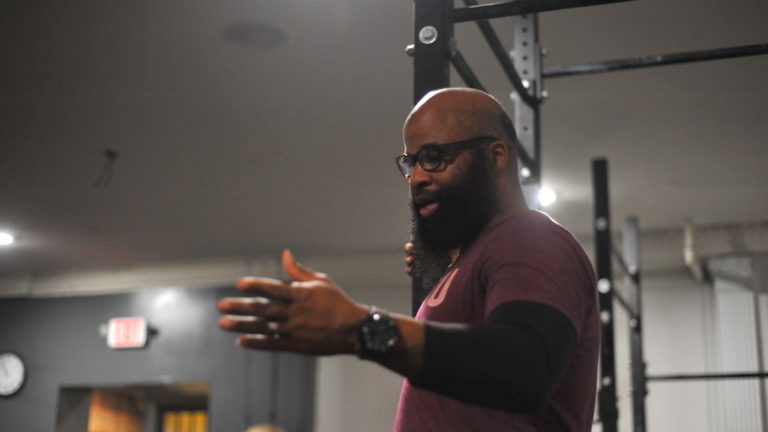 “I was a boxer. … I was fighting amateur since I was maybe 9 years old. I wanted to go to the Olympics, and boxing was my passion,” he said. “But I got caught up into the streets, and that derailed that.”

As a child, Blackman shared his passion for boxing with his twin brother, Raymond, but their paths diverged in their late teens.

“I went to jail. He went to the army,” Blackman said.

“I went to jail at the age of 19. I did five years … . I went home. I started boxing. I tried to turn pro, but I got caught up in the streets, went back to jail, did another five years,” he said.

“Been back and forth in institutions since I was maybe 19 years old. Probably spent like maybe 30 years in incarceration.”

While in jail, Blackman had a lot of time to dedicate to fitness.

“I’d been working out, playing around, trying to stay fit. But I didn’t have the knowledge of staying fit,” he said. “You know, you got certain routines behind bars … looking at fitness books, looking at TV, stuff like that.”

Sometimes he and the other inmates would see something on TV and decide to give it a try the next time they were out in the yard. One day they tuned in to ESPN and happened to catch the CrossFit Games.

“We got pull-up bars there, right? And we got dip bars. And we are people that can do a lot of pull-ups, lots of dips, you know? Strict pull-ups, strict dips, stuff like that,” he said. “But we’re seeing guys on CrossFit doing pull-ups like they was eating them for breakfast.”

Reentry and a Return to CrossFit

After Blackman finished serving his time, he found himself in reentry court.

“Then I heard about CrossFit again,” he said. “And then I met Wylie.”

Wylie Belasik is the owner of Subversus Fitness, the home of CrossFit Center City, where Blackman is now part of the coaching team. Belasik is also the founder of a program called ULiftU, a nonprofit with a mission to help rehabilitate “currently incarcerated and returning citizens to become professional fitness coaches.” 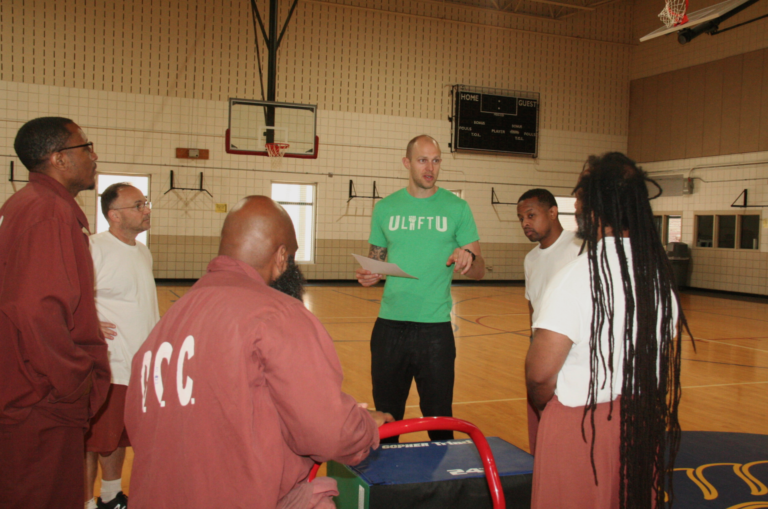 Belasik was inspired to create ULiftU because he saw the power of “sport as a tool for social change,” he said.

“One of the biggest frustrations I had working with underserved, marginalized groups was that for folks who specifically had a record, who had been incarcerated, their opportunities for reemployment … to really raise themselves up were really limited,” Belasik said. “We knew that sport worked as a tool for rebuilding someone, self-confidence, their self-image, their self-esteem, but the reality was that if we couldn’t connect a job opportunity with real upward mobility on the other side of that, what were we really doing?”

To address this issue, Belasik built tangible growth and real job opportunities into the ULiftU program. Participants in ULiftU spend nine to 12 months in a combination of classroom learning and practical application that ultimately leads to a coaching certification. The program pays participants for the time they spend learning, covers the cost of their certification, and helps connect them with coaching gigs and clients upon graduation.

“We can really create an opportunity specifically for returning citizens to really be able to write their own ticket in this space where we can leverage the physical culture which exists in prison,” Belasik said.

For Blackman, because of his fitness background, and because he had already been exposed to CrossFit in prison, his choice to connect with Belasik through reentry court seemed organic. Belasik invited Blackman to his gym to come do a workout.

“I came here one time to meet him,” Blackman said. “I seen him working out. I still didn’t understand what they was doing.”

Blackman eventually joined the ULiftU program. During his internship, he would come to Subversus and surprise himself with what he was capable of doing.

“When I was in internship and I used to come in and look at the workout for the day, I’m like, ‘I don’t know if I’m gonna be able to do that,’ but I would do it. And every time another workout would come, I couldn’t wait for the next workout, and I’m gonna be in trouble when I’m doing it, but that’s the fun point. Like I can’t believe I just did all that,” he said.

Blackman stuck with his training, even though some days were a struggle. 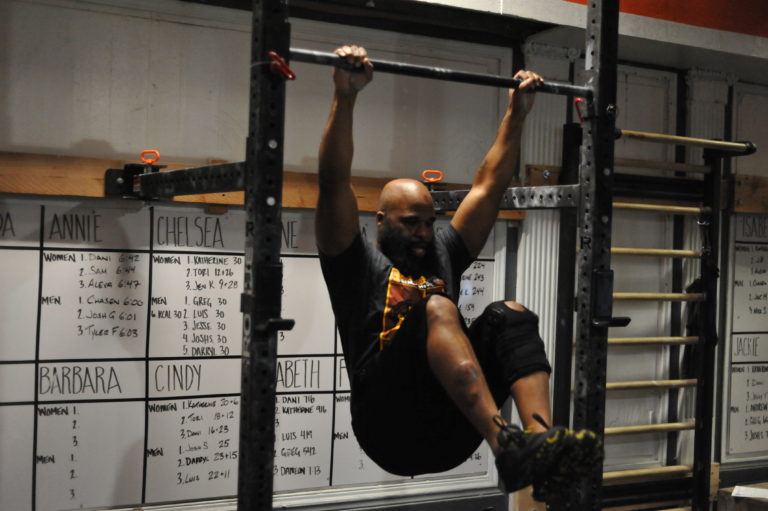 “I gotta stay mobile, because I got bad arthritis,” he said. “So that keeps me motivated.”

Some days Blackman struggles to squat or lunge because of arthritis in his knees. He also has an old gunshot wound in his lower leg that may contribute to his chronic pain.

Despite the struggle, Blackman said CrossFit helped him get in peak physical health. He lost 20 to 25 lb. in training and “gained a ton of capacity.”

“While I haven’t touched no boxing and all I did was CrossFit, when I put them gloves on and when I went to test my capacity for my conditioning, a lot of people, I don’t think they want to stay in front of me,” he said. “I’ll give you six minutes right now easily.” 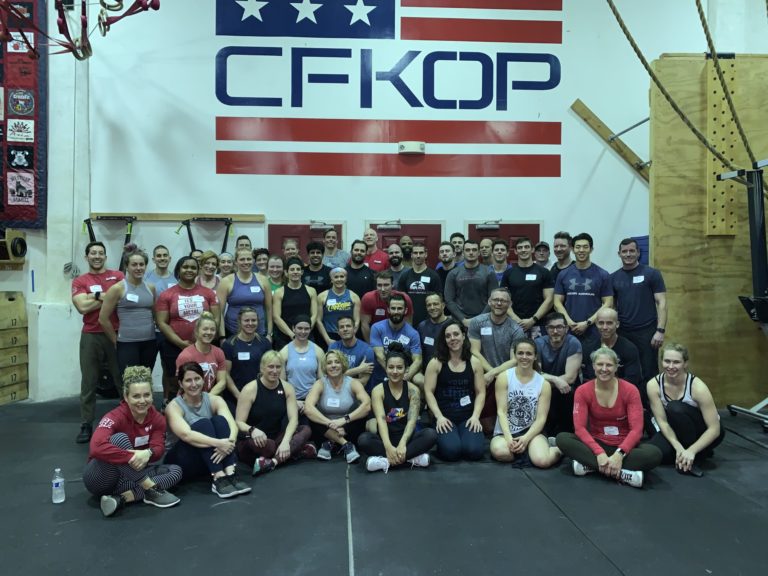 About a week before Philadelphia and much of the rest of the U.S. went under lockdown because of the COVID-19 pandemic, Blackman spent the weekend completing the CrossFit Level 1 Certificate Course at CrossFit King of Prussia.

“I study this book day and night,” Blackman wrote in an email to Belasik in December. “I refer back to my CrossFit level one book daily. To be able to help our members. Each time I re-read the book I find something new to pass along.”

While the pandemic has affected how much time he can spend in the gym — “I really haven’t had a whole lot of reps coaching yet,” he explained — Blackman is finding his voice as a coach.

“I’m still in the beginning stages,” he said. “I haven’t really moved outside the L1 yet, so I still have aspirations.”

“I really want to get in front of people and do some coaching … get some reps and see how I go. Then I could plan, and I could go in and market myself,” he continued. 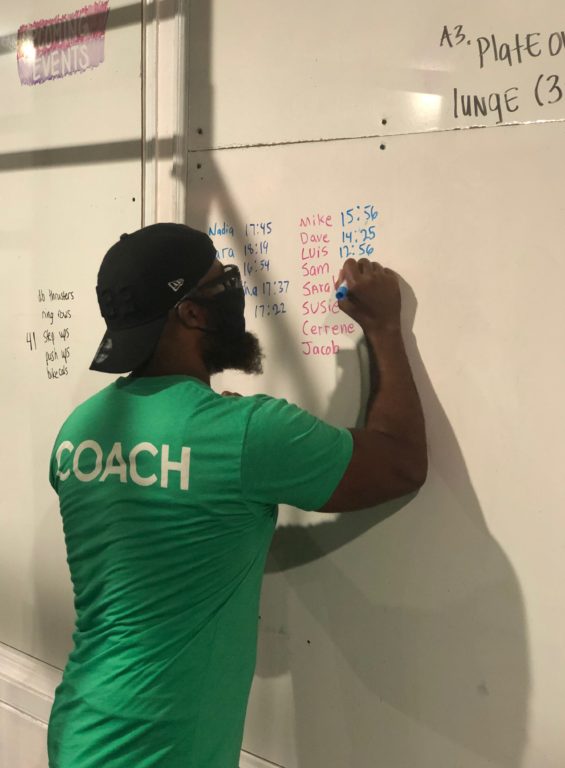 “I try to follow the lead of the other coaches. I’m trying to take a little bit from each of them and see what works for me. But I know I talk a lot, so I know being loud and vocal will be my brand,” he said with a laugh.

“We’re just really lucky to have him,” Belasik said. “We’re lucky to have his attitude, his experience, and the fact that he’s 54 and he’s kicking butt is, I think, really important, because a lot of times people see CrossFit and they see a bunch of 25-year-olds in the room who are just kind of able to do whatever they want.”

“We can’t just have an all-white coaching staff who is under 35 years old. It’s not gonna work,” Belasik said, noting “groups of people who are most affected by chronic disease are oftentimes not represented in the coaching ranks.”

“Rodney’s perspective is a valuable one,” he added. “Voices like his are really important.”

Blackman uses his voice — sometimes loudly — to motivate and inspire other athletes.

“I like to see them grunt too,” he said with a chuckle. “They love working hard. They love to be whipped, so to speak. It makes them feel good when they leave, and they relish the fact that when they come in, they’re going to get a good workout.”

“Maybe sometimes you could see them get a little scared, have maybe a little fear … but they embrace it. They love it,” he said. 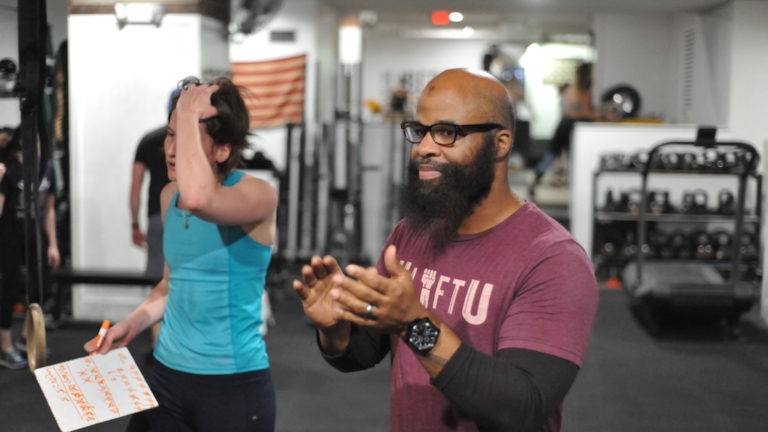 Blackman encourages other athletes in the gym.

He enjoys motivating his athletes — “Motivational speaker is a sweet job,” he said — and he has some specific things on his mind that he uses to keep himself motivated.

Blackman sometimes jokes that he’s lucky he found a way to stay young and fit in his fifties.

Find a Level 1 Certificate Course near you, or sign up for the Online Level 1 Course.