Question: Does fructose have any direct impact on pancreatic β-cells?

Takeaway: This in vitro study indicates chronic fructose exposure increases insulin release by pancreatic β-cells, which may contribute to obesity and insulin resistance over time.

Fructose ingestion has been linked broadly to metabolic dysfunction and poor metabolic health (1). In humans, the majority of fructose is quickly taken up by tissues containing GLUT2 and GLUT5 receptors, such as pancreatic β-cells. The majority of fructose is catabolized in the liver, where it is largely converted into fat, a process that increases liver fat content and circulating triglyceride levels while stimulating uric acid release (2). Fructose absorption by the liver and hypothalamus has been shown in both organs to reduce ATP levels (unlike glucose, which increases cellular ATP levels) and increase AMPK activation; these effects in the hypothalamus are associated with increased calorie intake (3). Pancreatic β-cells express both T1R2/3 and GLUT2 receptors, which support fructose uptake in the context of physiologically relevant levels of glucose. This 2019 in vitro study examined the effects of fructose in these pancreatic β-cells.

Rodent and human β-cells were exposed for four days to fructose at a physiologically relevant concentration (5mM), similar to concentrations potentially present after soda ingestion (4). After this period, the cells were dosed with an 8.3 mM glucose solution designed to mimic a postprandial (after-meal) blood glucose elevation. The insulin response in fructose-doped cells was compared to that of control cells.

At the same glucose concentration, cells that had been chronically exposed to fructose secreted 60% more insulin than control cells. Acutely exposing control cells to fructose did not replicate these effects — that is, only chronic fructose exposure increased insulin secretion. Notably, chronic aspartame exposure did not have the same effect, which indicates this increase in glucose-stimulated insulin secretion (GSIS) was unique to fructose and not merely due to binding of the T1R2 receptor (5). As seen in previous research studying hepatic and hippocampal cells, compared to controls, chronic fructose exposure led to a reduction in cellular ATP levels and an increase in AMPK levels within these pancreatic β-cells. 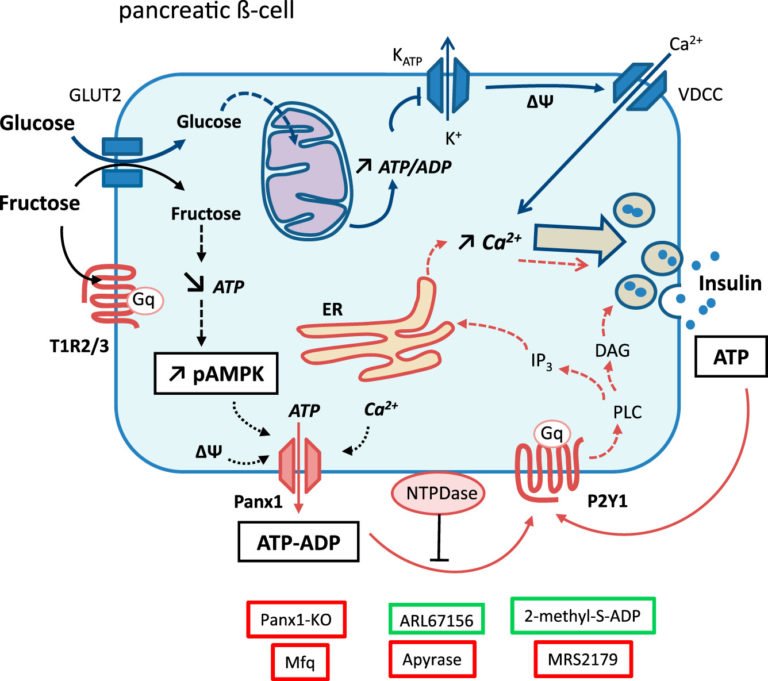 Figure 1: Overview of the regulatory impact of fructose in pancreatic β-cells. The effect of fructose on Panx1 and P2Y1 is discussed in greater detail in the full publication.

It is unlikely human pancreatic cells, in vitro, will experience the exact pattern of fructose exposure tested here (i.e., continuously elevated fructose for four days straight); however, chronic, repeated elevation of fructose levels through repeated ingestion of sugar-containing food and drink may have similar effects. These results suggest, independent of the effects of fructose on other organs and general metabolic health, fructose may directly contribute to insulin resistance and obesity by increasing the release of insulin from pancreatic β-cells at a given level of glucose elevation. Combined with previous evidence that fructose increases fat deposition in the liver, pancreas, and other organs via its effects on hepatic fat and triglyceride release, and that it may increase calorie intake via its direct effects on hypothalamic appetite regulation, this study supports an increasingly robust argument that fructose is uniquely deleterious to metabolic health.