Jason Leydon has devoted his life to coaching. And while he’s spent more than 18 years pursuing knowledge and learning from experts, he said the one thing all great coaches share is their ability to connect with people.

Leydon, a CF-L2 trainer, began his coaching career as a basketball coach 18 years ago. In 2008, he became a CrossFit athlete and opened CrossFit Milford in Milford, Connecticut, adding the designation “CrossFit trainer” to his resumé.

Since then, Leydon has sent more than 35 athletes to the CrossFit Games. He’s also coached the USA Powerlifting and Skeleton teams, trained professional mixed martial-arts fighters, and served as the strength-and-conditioning coach for a high-school basketball team that went undefeated and won a state title. 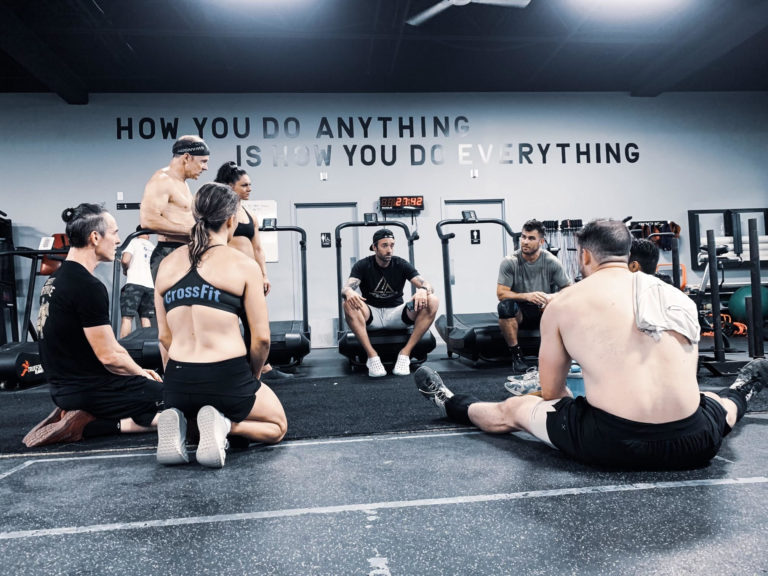 Like many coaches, Leydon first approached both basketball and CrossFit as an athlete. He competed as an individual in the CrossFit Games in 2009 (the last year in Aromas) and on a team in 2010 (the first year in Carson).

It was in 2010, while competing on a team and simultaneously trying to coach members from his gym who’d qualified as individuals, that he realized he’d have to choose between being a coach and an athlete.

“I started looking at the athletes competing, and here I am, I’m 6’3”, long legs, short torso; I’m definitely an outlier,” Leydon said.

He was losing his competitive fire and at the same time discovering his passion for coaching. After the 2010 CrossFit Games, Leydon decided to stop competing and throw all his energy into coaching.

The Beginning Coach: The Craftsman and Technician

Once he decided to stop competing as an athlete, Leydon became, as he said, a craftsman of coaching. He’d studied anatomy, physiology, and nutrition in college, but he knew he needed more. 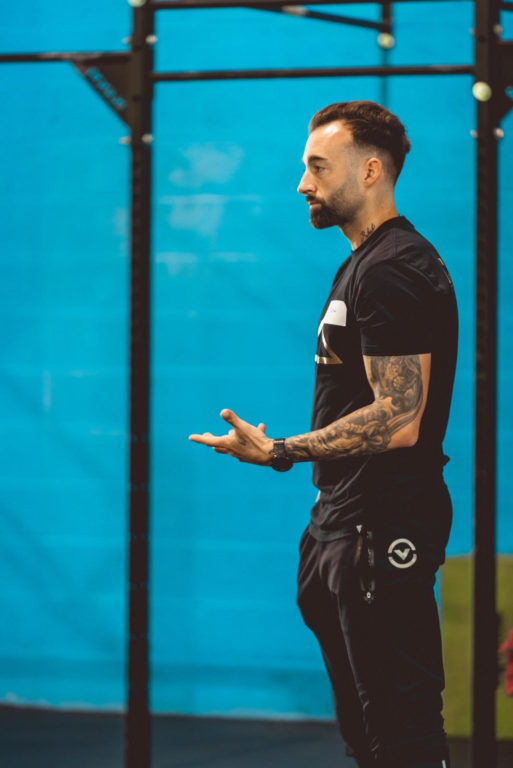 “I dove into studying and researching,” Leydon said.

He also sought out mentors.

“I would reach out to people and pay to talk to them — I would always offer to pay,” he said. “The thing that’s crazy about the CrossFit community — and I think the strength-and-conditioning community — is you can reach out to almost any coach and they’ll be willing to help you and talk to you.”

Now, as a mentor to coaches himself, Leydon realizes this step is an important part of a beginning coach’s journey.

“You need a period of time when you try to learn as much as you possibly can about everything,” he said.

Gathering knowledge is only the beginning, however.

“The true art comes down to watching coaches apply it to different people, and that’s something I learned a lot working for CrossFit on the Level 1 seminars,” Leydon said.

He looks at the first phase of coaching as the craftsman phase — the gathering of knowledge — and then comes what he calls the technician phase, where you’re applying what you’ve learned in the gym with different athletes.

Leydon said when new coaches are gathering knowledge, it’s important for them to understand the difference between methods and principles.

“Nowadays lots of coaches run into problems inside their learning and development because methods are what’s flashy,” Leydon said.

“This snatch program, this back-squat program, this muscle-up program. That’s what sells — here’s a webinar about how to learn how to teach someone how to do handstand push-ups. That’s a method, it’s not a principle,” he said.

Leydon said the problem with focusing on a method is you’re always tied to that one method.

“If you understand the principle, then no matter what that method is, you can always adjust methods to create the proper stimulus to drive adaptation, whether that’s strength and conditioning, or whether that’s running your business,” he said.

After a few years of gathering knowledge and practicing coaching, Leydon was approached by strongman and CrossFit Games competitor Rob Orlando.

Orlando wanted Leydon to write his programming as part of an effort to qualify for the Games.

Leydon almost said no because he’d never programmed for someone at that level, but ultimately decided to take on the challenge. While Orlando’s Games experience didn’t go as planned — he took a DNF on the first ocean event and was out of the competition — the experience showed Leydon he was capable of coaching high-level athletes. 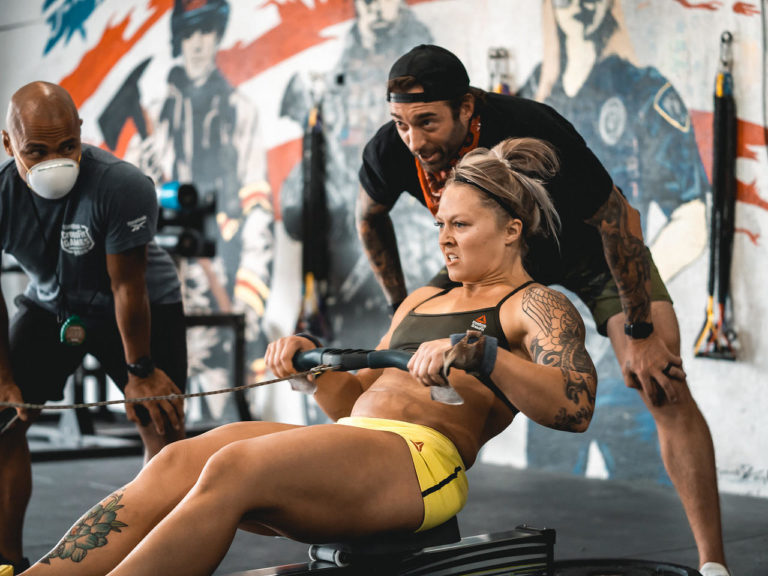 That’s when Leydon said he went full steam ahead into the next phase of his coaching. He began mentoring and developing other coaches and started focusing on aspects of coaching beyond weightlifting and conditioning.

Leydon soon realized he’d never be a truly great coach if he couldn’t connect with other people. He credits his wife for teaching him how to communicate well, and the importance of truly connecting with and understanding other people.

“Communication has to be done in a way that you’re understanding who you’re talking to, you’re saying it in a way they are going to understand it, but you’re also hearing what they’re saying,” he said.

Leydon worked on removing emotion from situations with athletes, teams, and employees so he could hear both sides and bring about a resolution. He began to understand the importance of working with the different personalities within the gym and making sure everyone felt heard and understood.

“That was the next section of my coaching development,” Leydon said, “when it came to leadership and trying to become a ‘master coach’ and to me being an amazing leader, coach, father, friend. It comes down to your ability to communicate.”

Whether you’re a coach trying to direct a team in competition or you’re a gym owner trying to manage 10 different coaches, to be successful, you need people to buy into your leadership, he continued.

“Buy-in occurs through trust, and trust occurs when people feel they are heard and you have a good understanding of what their needs are and you meet their needs,” he said.

The Professional Coach: Keep It Simple

After being a coach for almost two decades and mentoring new coaches for years, Leydon said while knowledge is important, coaches should know how to apply that knowledge in many different settings — and combine all of that with true human connection.

“Someone once told me you could be the greatest coach in the world, but if no one likes you, no one is going to know you’re a great coach, because nobody wants to be around you,” Leydon said.

And the best piece of coaching advice he ever got is perhaps the most difficult to follow: “Keep it simple.” Once you’ve accumulated a significant amount of knowledge, it’s tempting to want to communicate everything you know to your athletes.

“For coaches, especially new coaches, you’re inundated with Facebook, Instagram, and all the flashy new gadgets, and the lights that light up,” Leydon said. “It’s difficult to just keep it simple and effective, but if you keep it simple and it’s effective and the person feels connected and they trust you, then people are going to come to you.”

The final piece of being a professional coach, Leydon said, is offering a five-star experience to everyone who walks into the gym, whether it’s their first or thousandth time.

Leydon said he’s always thinking about being a good host inside the gym, making people feel connected and wanted. He accomplishes this through small details, like introducing people to one another, staying off his phone, and not eating while coaching. He often thinks of it like a doctor’s office — would we want our doctor texting and eating a sandwich in the middle of the appointment?

“Is this a hobby or are we professionals?” Leydon asked.

Hilary Achauer is a San Diego-based marketing writer and journalist specializing in health, fitness, and wellness. She’s been a regular contributor to the CrossFit Journal and CrossFit websites and has been published in The Washington Post, The Week, Men’s Health, Eating Well, Greatist, and The Huffington Post.

Nicole Christensen is the owner of CrossFit Roots in Boulder, Colorado, a Certified CrossFit Coach (CF-L4), CrossFit Seminar Staff Flowmaster, and Senior Content Developer at CrossFit. She is the Managing Editor of the Professional Coach publication and enjoys coaching athletes in group classes at her affiliate.