Question: How extensive and significant are the links between excess adiposity — that is, too much body fat — and COVID-19 susceptibility?

Takeaway: “Overfat” impairs organ and immune function, increasing susceptibility to infectious disease. Given the generally high level of viral particles the average individual is exposed to each day, excess adiposity is a major threat to individual and public health.

This April 2020 review summarizes the links between excess body fat and infectious disease risk, then comments on the significance of the connections.

The average person is exposed to an estimated 1,012 new viral particles each day, making us  highly reliant on our immune systems to prevent infection and sickness (1). In the current COVID-19 pandemic, chronic conditions including diabetes, hypertension, cardiovascular disease, and chronic inflammation have been associated with increased disease severity and mortality across multiple populations and in both younger and older patients (2). Most of these conditions are associated with, exacerbated by, or directly caused by excess adiposity, which the review authors call “overfat” (3). 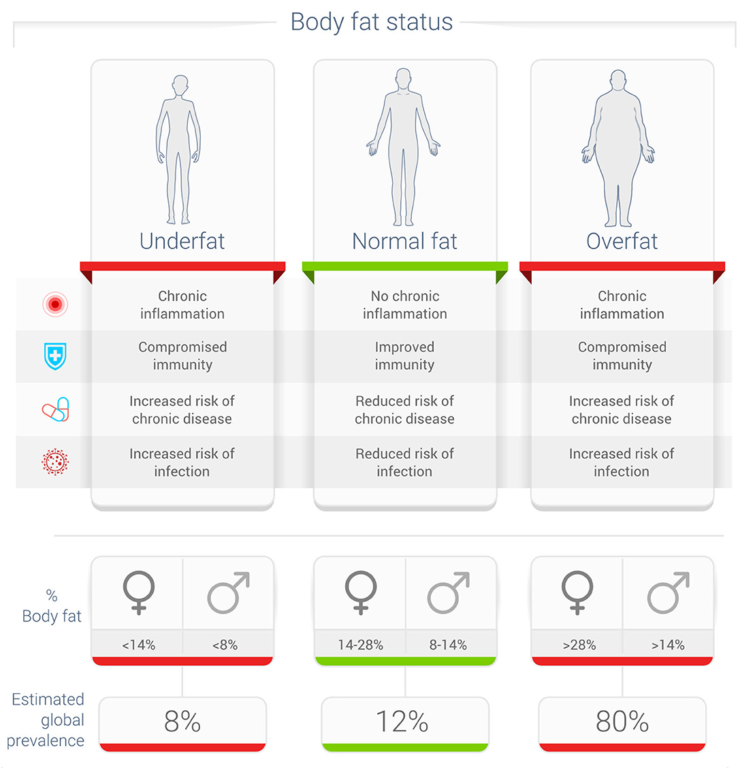 “Overfat” has been linked to increased vulnerability to infectious viral and bacterial diseases, impaired immune function, and impairments across a variety of organ systems (4). In previous epidemics, such as H1N1, and in seasonal influenza, excess weight has been an independent risk factor for impaired disease outcomes and disease-related death (5). For some conditions, obesity has also been found to reduce vaccine effectiveness (6).

Excess body fat has been linked to impairments in immune cell function, reduced antiviral responses, and increased viral shedding and transmission (7). Risk may be increased further in respiratory infections, specifically, as adiposity has also been associated with increased lung permeability and respiratory tissue breakdown, which may expedite broad lung tissue infection (8). Notably, these factors increase both individual and population risk, as they imply obese individuals are not only sicker when infected by a respiratory illness but also more likely to spread the disease to others. These and other factors are summarized in the figure below. 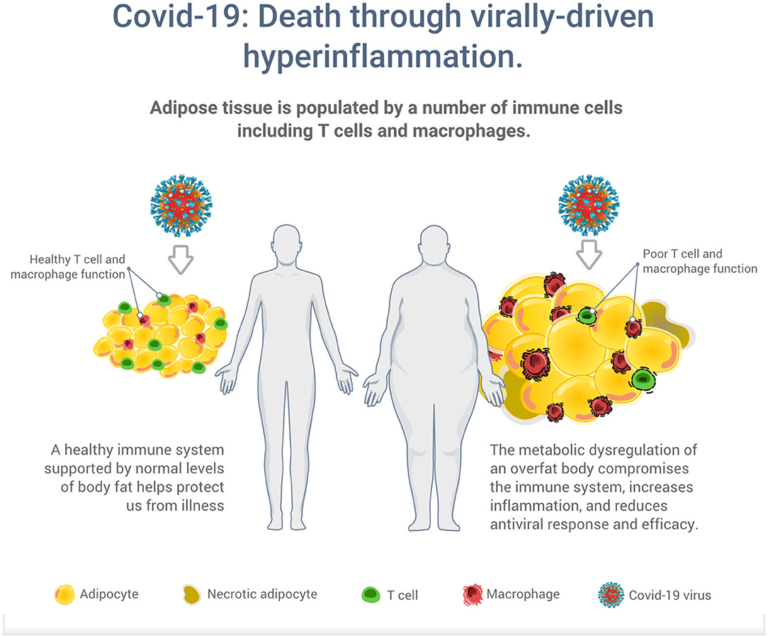 Figure 2: Illustration of the potential increased risk of death through virally driven hyperinflammation in overfat hosts. Excess adipose tissue promotes systemic inflammation and is characterized by infiltration and activation of immune cells secreting pro-inflammatory mediators, such as cytokines, adipokines, and chemokines, which secrete additional pro-inflammatory molecules. In addition to T cells and macrophages, these immune cells also include neutrophils, B1 and B2 cells, NK cells, and innate lymphoid cells.

The review authors argue that in the context of ubiquitous exposure to viral particles, the pandemic of excess body fat and its associated impact on inflammation, immune function, and viral response is “one of the greatest threats to global human health” (9). More optimistically, however, they conclude that the strength of our immune system — and thus our vulnerability to infectious disease — is, like chronic disease and physical impairment, largely within our control.