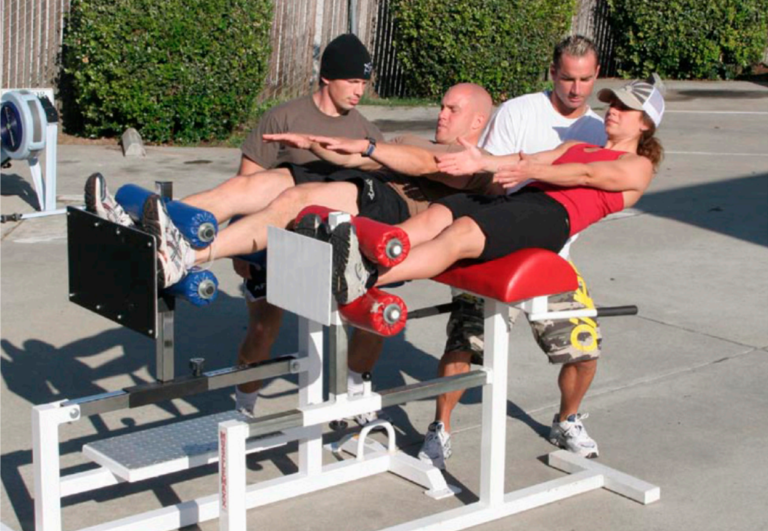 The GHD sit-up was once a gym staple. In the gym today only rarely will someone be found doing other than back extensions on the GHD. In no small measure the decline of the GHD or roman chair sit-up coincided with the advent of the crunch. The crunch came to fashion on warnings and claims in popular media of the traditional sit-up’s destructive impact on the back.

It was argued that the GHD style sit-up’s primary movers were the hip flexors and not the abs and consequently this sit-up, and sit-ups like it, were actually not good abdominal exercises. It was further argued that recruiting the hip flexors to lift the torso was destructive to the lumbar spine.

Once every couple of years we get lucky and find an exercise physiologist to repeat this message of poor ab recruitment and lower back destruction standing in front of the GHD apparatus. What we do is ask them to mount the GHD and perform a set of thirty sit-ups for us while rehashing the poor recruitment claim.

The fun comes the following day when the report comes back from the exercise scientist that they are almost too sore to sit upright. Laughing, walking, standing, and moving are all excruciating. Where are they hit? The abs.

Our favorite story along these same lines comes from Matt Weaver (www.speed101.com), arguably the world’s fastest human being. On top of being known for hitting 85 mph on a bike, Matt was crowned “King Sit-Up” in high school for completing 100 perfect-form bodyslapping sit-ups in one minute. In one of his earlier visits to CrossFit Santa Cruz he found himself in a multistation circuit with a group of CrossFit veterans that included twenty-one reps of GHD sit-ups with a full range of motion, hands reaching back to the floor.

The workout left Matt sick in the immediate aftermath. This was a surprise for sure but nothing prepared Matt for what came the following morning: “I awoke later without the slightest ability to sit up. It was as if the six pack was totally gone, though all ribs remained. The curse had left me merely able to roll over and slither like a snake off the edge of the bed. From there I had to use my arms in humiliating ways to move about. I avoided being seen. A week passed, and I began to revitalize.”

The worst was yet to come! In the wake of Matt’s being dethroned as King Sit-Up, his abs had swollen and distended markedly. This kid looked fat and sunburned where the week before he’d been ripped and lily white. As the swelling subsided, his scrotum grew and grew and grew. Matt’s father, John, is an ER doc, so he was consulted. He laughed himself to near seizure. (Our kind of doc.)

Before the swelling stopped Matt’s scrotum had become the size of a small and very ugly cantaloupe. Why we have no pictures we’ll never understand.

Apparently the fluids that had swollen Matt’s abs had drained into the inguinal canal and filled the scrotum. Oh, and apparently GHD sit-ups recruit the abs. Matt is convinced.

The lesson we’ve drawn from the GHD sit-up is that in spite of the primacy of hip flexors over trunk flexors, or the abs, in this sit-up it recruits the abs powerfully in two ways. First, the movement takes the trunk from hyperextension to full flexion, albeit with negligible load. (No crunch can match this range of motion.) Second, the role of the abs in this sit-up is powerful and largely isometric—i.e., they stabilize the torso from undue extension.

This second point is consistent with our belief that the most powerful, functional, and developmental contractions of the trunk are isometric, not isokinetic. Our favorite ab exercises are predominantly stabilization or isometric exercises. The GHD sit-up, the L sit, and the overhead squat share this stabilization role. The lack of trunk flexion in these moves hides their potency from the uninitiated.

Our experience with athletes and static hip flexion work like the L sit and more dynamic exercises like the GHD sit-up have led us to several conclusions:

What about the danger to the lower back purported to be induced by strong hip flexor work? We have neither induced nor seen this damage. We do however have some hunches as to how this might have occurred in communities where roman chair sit-ups and traditional military PT sit-ups were in wide acceptance.

First, in military and law enforcement PT where the sit-up was king, it was and is essentially a biphasic movement. With feet anchored and knees bent, this sit-up comes up with a slight pause in the middle of the action. Look at video of someone doing these sit-ups and you’ll see the pause.

What is happening is that the upper back makes solid contact with the ground under the upper abs and so they can flex the trunk and fulcrum off the contact point. As the sit-up continues, the middle abs flex the torso but the lumbar curve surrenders without finding resistance and at full middle rectus contraction the spine is neutral and not flexed. The contraction occurred with no real load; the belly and back just sank closer to the ground. This stalls the sit-up but the pelvis and low back have solid contact with the ground so the hip flexors complete the movement. The natural, biphasic, one-two count of the military sit-up is a repeat of upper abs throwing the movement to the hip flexors where they complete the movement. Upper abs, hip flexors. Upper abs, hip flexors. No effective middle ab work.

This deficiency of middle ab work, and consequently strength in the middle rectus, and the violence of the toss from upper to lower abs may have presented unhealthy wear and tear on the lumbar spine. This understanding came, in part, from some brilliant work by Koch, Blom, and Jacob in producing the “Ab Mat.”

Second, in watching people perform sit-ups on the GHD we note that very few employ the full complement of hip flexors in sitting up. The hip flexors include the iliopsoas and rectus femoris. The iliopsoas originates at the lumbar spine and attaches to the femur. In the sit-up it pulls the athlete to seated by the lumbar spine, potentially creating nettlesome shear forces on the spine. Rectus femoris is the top piece of the quadriceps and it both extends the leg and flexes the hip. Rectus femoris originates at the pelvis and attaches to the patella via the patellar tendon. In the sit-up rectus femoris pulls the athlete to seated from both the pelvis and the iliac spine. The activation of rectus femoris during the GHD sit-up does two important things. First, it adds significant force to the movement. The acceleration of the torso to upright is so forceful when rectus femoris is engaged that our trainers can detect its use or lack of participation from their peripheral vision. What it adds to the movement is obvious in speed and acceleration of the torso. Second, rectus femoris reduces the shear force on the lumbar vertebrae by pulling from the pelvis and iliac spine instead of the lumbar spine.

When coaching the GHD sit-up, we cue for the athlete t 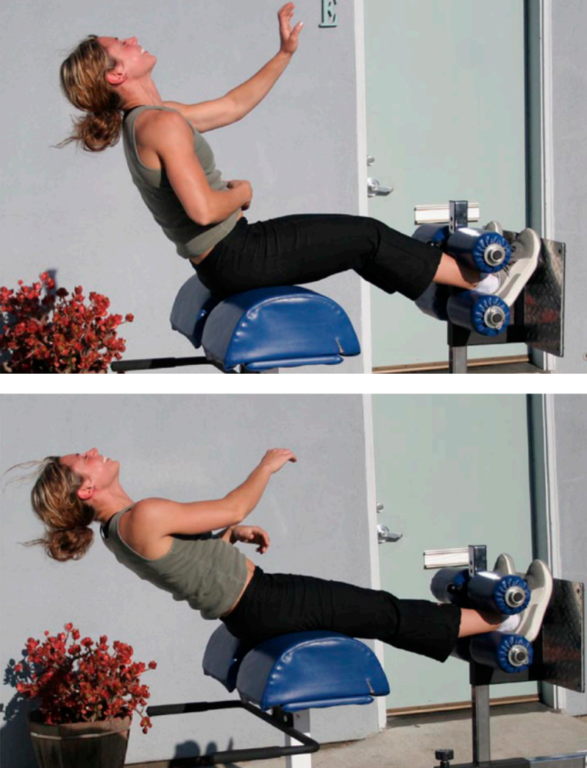 o sharply extend the legs while coming up. The difference is obvious to everyone watching when rectus femoris kicks in. Those who have identified the GHD sit-up and other feet-anchored sit-ups as a source of low-back pain seem to always pull with the iliopsoas alone and never use rectus femoris. Those who’ve had problems with low back pain from GHD or roman chair sit-ups will find considerable relief by training to use the full complement of hip flexors in performing sit-ups.

Third, all too often communities that have held the sit-up in high regard have typically neglected hip extension work. Military and police physical training has historically been enamored of the sit-up. It is one of the yardsticks by which police and military fitness is traditionally measured. In most of these programs there are no squats, no deadlifts, no good mornings, no stiff legged deadlifts, and no back or hip extension exercises. The posterior chain in these communities typically sees no work other than running or perhaps burpees. What this imbalance of regular hip flexion exercises with little hip extension and no full-range hip extension portends for injury we don’t know. The imbalance can’t be a good thing, however. Regardless, we see our back and hip extension drills on the GHD to be indispensable to lower back health.

We start newcomers out on the GHD sit-up by spotting to make sure that they can come down to parallel without collapsing. (Last year, and very briefly, we trained a Stanford University coach who made a huge point of sharing his focus on core training on the Swiss ball. When we got him on the GHD, he fell back off of the horizon and couldn’t get up. He had to be deadlifted back to horizontal.) If our athlete is afflicted with a core as weak as the Stanford coach’s, we start him on the AbMat and reintroduce the GHD sit-up at a later date—when more rudimentary strength has been developed.

We also caution against unbridled bouts on the GHD for newcomers to avoid the Matt Weaver cantaloupe syndrome described above. This is a potent exercise and it has sidelined dozens of strong, strong, athletes for a few days to a week.

About the Author: Greg Glassman is the Founder of CrossFit