The SAID principle states that your body responds to exercise with “specific adaptations to imposed demands.” Logically this makes sense. If you do biceps curls, your biceps will grow stronger. You won’t all of a sudden run faster or win at chess. You adapt to exactly what you train for. It’s one of the most universally accepted principles of exercise science.

The act of doing something as simple as a biceps curl causes a whole cascade of responses and adaptations to occur. Muscle fibers grow larger and stronger. Mitochondria multiply inside of muscle cells to increase the muscle’s energy supply. Capillaries grow more numerous to supply oxygen and nutrients to the muscle fibers. Neurological connections form, and the myelin coating around nerve fibers thickens. Mechanical stress even increases the density of bones and the strength of tendons involved in the movement.

All these adaptations occur in response to a simple, very specific demand. The SAID principle correctly predicts these responses. Doing biceps curls will make you better at biceps curls. But if human performance was as simple as SAID, any kid with a clipboard and a whistle could be a coach.

There are 206 bones and 650 muscles in the human body. This is a lot but not nearly enough to have specialized bones or muscles for every activity. We have no “running bones” or “swimming muscles.” In the brain, there are  approximately 100 billion neurons, the nerve cells that serve as a key component of your brain and nervous system. With that many, there must be room for specialization there, right?

The nervous system evolved under severe resource constraints. Neurological connections tend to form in a way that reduces the energy cost of transmitting data (unless you’re a giraffe). The human brain consumes a massive amount of energy, around 20% of our basal metabolic rate. Not only is the brain hungry, but it cannot be starved even for a few minutes. This constant, high demand for energy means nervous system tissue is metabolically expensive. Most animals have small brains for this reason.

Similar movements tend to reuse some of the same neural pathways to minimize metabolic costs. Furthermore, frequently used pathways build up a coating of a fatty substance called myelin, which insulates the nerves, further reducing the cost of sending information down that particular pathway. Frequently training a movement leads to a thicker myelin coat around the nerves associated with that movement. This boosts the efficiency of a trained movement and related movements that share parts of the same pathway.

Let’s consider a strange phenomenon. If you do curls with only your left arm for a period of time, when later tested, your right arm will grow stronger. A study out of Australia indicates the transfer of improvement to the untrained limb is about half the increase found in the trained limb.

A biceps curl starts in the brain, then travels down the spinal cord and then into the peripheral nervous system to your muscles. Much of this path is shared between left arm curls and right arm curls. Thus, training one limb will strengthen the other. 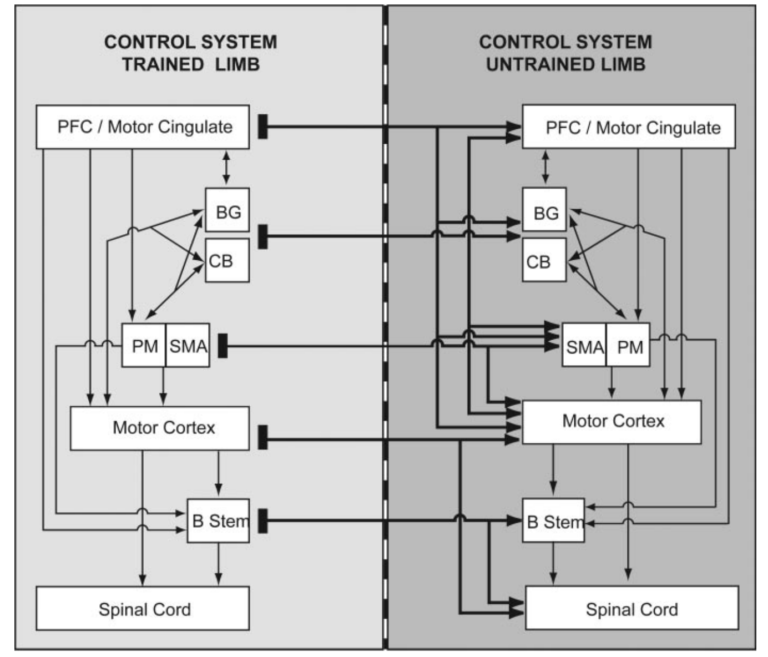 Representation of the supraspinal network involved in movement control in each limb, with cross-hemispheric connections depicted via bold lines (Figure 3 in “Contralateral effects of unilateral strength training”).

Hormones are another example of a non-SAID response to training. Let’s consider the case of a person who injects anabolic steroids into their left buttock. After a period of training, not only does the left cheek grow stronger, but so does the right. In fact, the person’s whole body gets stronger. The body releases HGH, testosterone, and other anabolic hormones in response to exercise, especially full-body, high-intensity efforts. This is called the neuroendocrine response to exercise. Perhaps this explains why a person’s bench press will go up and their arms will get bigger after they start squatting.

These examples poke a few holes (pun intended) but don’t disprove SAID. “Specific adaptations to imposed demands” is a valid but incomplete model of exercise adaptation. Here is a new principle that complements SAID.

When you do a multi-joint, functional movement such as a pull-up or Olympic lift, it becomes much more challenging to isolate the effects into “specific adaptations.” For example, heavy squats improve bone density in every bone from your shoulders to your feet. Since you don’t have separate bones for squatting and deadlifting (or running, rowing, etc.), it’s silly to call this a specific adaptation. I would instead call this a “general adaptation.” Increased bone density is a positive adaptation for just about any activity with the possible exception of competitive floating.

Another example that complicates the SAID model is the carryover effect you see between different exercises. Conventional deadlifts will also make you stronger at sumo deadlifts. Improvement in one exercise will lead to improvement in a closely related variation. This is not surprising. Most people also see improvements in their rowing, sprinting, jumping, and other movements involving hip extension. The improvements are greater toward movements that are more similar. I call these “related demands.”

Imagine a tent. The canopy is held up by several poles. If you place a pole in the middle of the tent, the whole ceiling goes up. It rises most in the center and gradually less at the periphery. Sounds a lot like “core to extremity,” right? Alternatively, you could raise a tent entirely from the periphery, but it would require a lot of poles and it still might sag in the center.

This is a pretty good analogy to a bygone era of bodybuilding when people would work each muscle in isolation. You can train the whole body one muscle at a time, but the resulting workouts are long and inefficient. That’s focusing on the poles and forgetting about the tent. Functional movements lift the whole tent with the fewest poles.

Of course, some adaptations are mutually exclusive. Extreme adaptations in one direction will disrupt your capacity in unrelated activities. Getting a 600-lb. squat is a surefire way to ruin your pommel horse routine. Both SAID and GARD are in agreement on this. The demands are too unrelated for GARD.

And we all know of the mythical “finely tuned athlete” whose training is so specific that walking up a flight of stairs could throw him out of tune. That might be exaggerating, but it’s true that as an athlete gets more specialized, unrelated demands have less impact or can be detrimental. However, anyone who has been around CrossFit long enough has surely seen one or two highly tuned athletes come into their gym and discover weaknesses they didn’t know they had. Such is the danger of over-specialization.

Let’s consider a program built around a core group of functional movements: squatting, deadlifting, running, rowing, jumping, pull-ups, Olympic lifts, climbing. These exercises are all multi-joint, core-to-extremity movement patterns. With just a few of them, you can train every muscle in your body. Functional movement-based workouts are quick and efficient. You do more work in less time, which has numerous other positive side effects, such as cardiorespiratory adaptations.

Your body’s hormonal response to workouts that require high power output is very different from long, low-power workouts. You produce much more growth hormone in response to high-power workouts. This goes a long way toward explaining why brief, intense workouts can be more effective than spending hours in the gym. The powerful neuroendocrine response just makes everything better. Even workouts you’ve never tried before will improve as your body’s hormonal profile improves. The more broadly you train, the more likely an unfamiliar task will feel like a related demand.

Old school bodybuilders and modern natural bodybuilders focus their training programs around the big functional movements. In fact, Olympic weightlifting legend Tommy Kono was the world champion in weightlifting six times (1953-59) and won Mr. Olympia bodybuilding titles four times (’54,’55,’57,’61). Note that he won both titles in the same year twice. When you don’t get your neuroendocrine response through a needle, whole body movements are a necessity.

Proof of the GARD Principle

Solely based on the SAID principle, the results of the CrossFit Games should be completely unpredictable. SAID predicts random outcomes in response to random demands. Competition at the CrossFit Games has proven such predictive methods wrong. We’ve seen many men and women perform consistently well over the years at the Games. They simply have a higher level of general adaptations, or fitness. General adaptations allow an athlete to overcome unexpected challenges more effectively. GARD predicts this.