CrossFit | The Friendship-Fitness Connection at CrossFit Cabarrus
Skip to Content 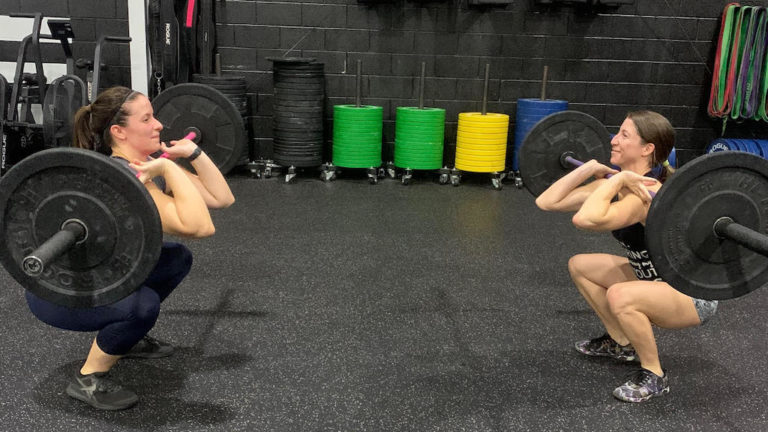 Cassie Hansen and her friend Jenn — friends who thruster together thrive together.

During a CrossFit workout, we have the opportunity to truly get to know ourselves. Ego is stripped away like so many tape lines on a handstand push-up wall. When we face Fran or Fight Gone Bad or Lane, we learn something about how we react to failures, unexpected challenges, and successes. And when we look across the gym through a cloud of chalk dust and lock eyes with a friend over rows of barbells bobbing like pistons, we forge a unique human connection that many of us hardly feel outside the gym.

This is a connection that buoys you back to the surface when you’re caught in the undertow of a particularly hard workout or challenging life event. It may even help you find an inner reserve of strength you didn’t know was in there under all that sweat and caked-on chalk residue.

CrossFit Cabarrus in Concord, North Carolina, is full of these sorts of connections. The gym’s owner, Angelo Bannister, makes them a priority. They are built, with purpose, right into the gym’s culture.

Finding a Friend at the Week’s End 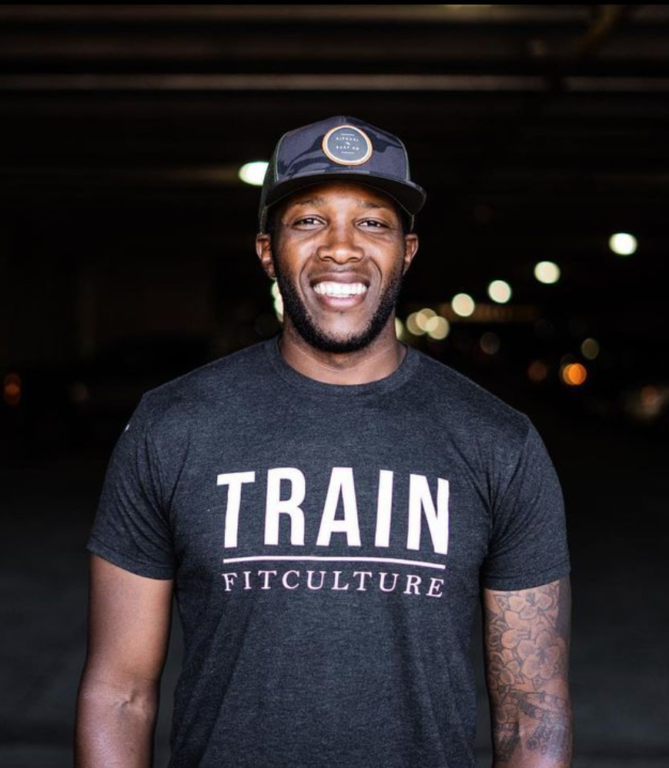 “We pride ourselves in the culture/ethos of our community,” Bannister said. “I know every box talks about their special bonding and camaraderie within their gym. However, I truly believe we have one of the most special CrossFit gyms out there.”

“I get to see athletes support others all the time,” he said. “Oftentimes, when there is a guest or a newer member, our athletes are all like ambassadors. They show those people pure kindness.”

One way Bannister actively promotes camaraderie is by programming partner workouts on Saturdays. On CrossFit Cabarrus’ Instagram, among the many posts featuring the WOD or  highlighting members’ accomplishments, you can also find moments that capture the unique magic of working out with a friend on the weekend:

It was precisely that kind of energy that turned one curious drop-in to a longtime CrossFit devotee. Five years ago, David Miller was “working out in a gym occasionally, but I kind of let myself go just working way too much,” he said.

A colleague of his invited him to come do a CrossFit workout at her gym in Kannapolis, not far from where he works.

“I think I killed myself the first time,” Miller said. “But … I knew I needed to get a little bit more fit.” 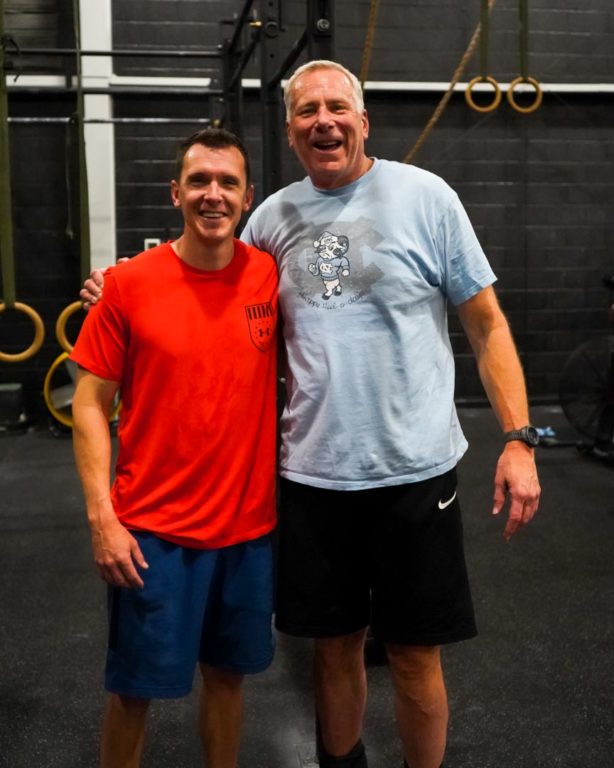 Miller enjoyed competing with his colleague, but the partner WOD is what hooked him. After two or three regular workouts, “I think I went in on a Saturday on a, you know, a partner-type workout,” he recalled. “I think the rest was history. So I’ve been hitting it probably three to five days a week.”

Though scheduling conflicts kept Miller from consistently joining his colleague in Kannapolis, he found a new gym home in CrossFit Cabarrus and found it easy to find new workout buddies.

“You make connections so quick,” Miller said. “And I’m fairly outgoing anyway, so it didn’t take long for me to make some new connections.”

One of those connections led to, perhaps, an unlikely pairing.

“On Saturdays … my CrossFit buddy that I’ve been working out with … his name is Jim. Doctor Jim. He’s a doctor,” Miller said. “He’s old enough to be my dad.”

Miller said his relationship with Doctor Jim is unique because they are “kind of peers but almost like a father-son kind of thing.”

“We’ve talked about life and just the wisdom that he’s experienced and raising kids to, you know, even to how … he’s getting older and just kind of wants to stay active instead of trying to deadlift 500 pounds.”

Part of what keeps Miller wanting to come back to the gym for the next workout is the encouragement he gets from his workout buddy.

“Jim is just a kind person, a very encouraging person,” Miller said. “He’s not gonna say, ‘Hey, you did a good job.’ He’s gonna say, ‘Dude, you really crushed that,’ and he’s gonna tell you how, and that little bit extra affirmation was like — it’s gratifying. You want to be around people like that just in life in general.” 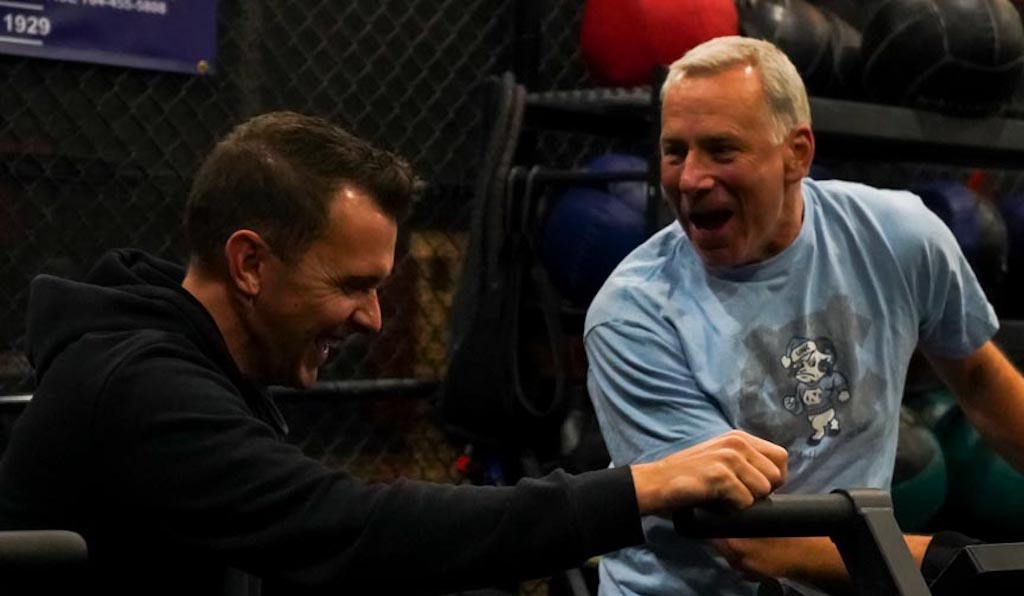 Getting People in the Door

Miller had a helping hand that pulled him into his first class. Some folks wander in of their own accord. In both cases, it’s often the hand that pats a new athlete on the back once they get there that will make them want to stick around.

Cassie Hansen started coming to CrossFit Cabarrus in March of 2019 as an alternative to her bootcamp classes.

“I was too intimidated to try CrossFit at first,” Hansen said. But when her bootcamp instructor had an issue with his alarm clock and was late for class one morning, she jumped into the CrossFit class that was happening at the same time. And then she came back for another class and another.

“I love the community and how my confidence has grown,” Hansen said. “Over the past year and a half I’ve seen myself accomplish things I didn’t think I could ever do.”

She’s enjoyed making friends along the way. Her first CrossFit workout buddy was her husband, Mark. 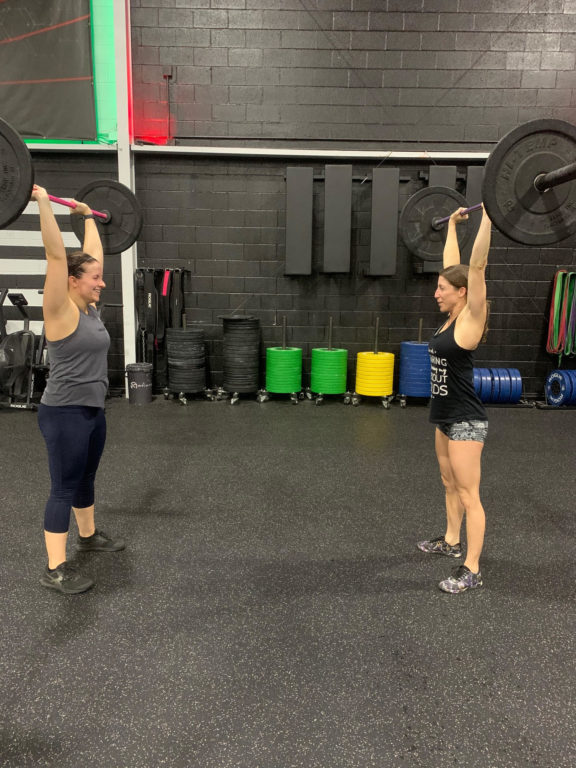 At 19 weeks pregnant, Cassie (left) joins Jenn for a 100-thruster workout with 5 burpees every minute on the minute.

“Since then, I’ve added a couple others, and I can find a buddy in whichever class I attend,” she said. “Jenn, is probably my next closest workout buddy besides my husband.”

Hansen describes Jenn as someone who is “strong, fierce, and hardworking.”

“Jenn and I suffered together in 5 a.m. classes for several weeks,” Hansen explained. “We are the only women in the class most early mornings, and we naturally developed a camaraderie. Whether it’s tossing competitive banter at the boys or joking about how much we dread the upcoming workout and begging coach to change the WOD, we tend to be on a similar wavelength.”

Like Doctor Jim for Miller, Jenn is a helpful mentor for Hansen as she progresses as a CrossFit athlete.

“Jenn has been doing CrossFit for several years and is always willing to share her knowledge and tips with me. Whether it’s about a technical lift, drills for gymnastics, or nutrition, Jenn’s never hesitated to offer advice when I needed and asked for it,” she said.

Hansen attributes her fitness success to the power of the bonds she’s built as a member of the CrossFit Cabarrus community.

“Before starting CrossFit, I was up and down, off and on with my fitness routine,” she said. “I would try a program or go to the gym on my own. That would work for a few months, before I’d fall off.”

“CrossFit’s community is what sets it apart from other fitness programs, and that community builds accountability and motivation that keeps me coming back for more.” 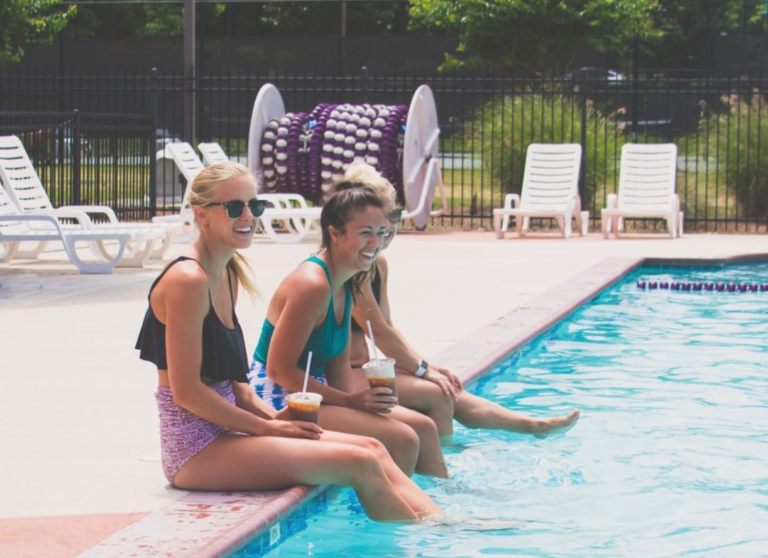 Cabarrus posts about “perk alerts” on Instagram, highlighting chances to put that fitness to good use with a fun activity outside the gym.

In addition to creating a welcoming atmosphere and programming weekly partner WODs, CrossFit Cabarrus plans special events throughout the year.

“One way we ensure that this isn’t just a place to work out in is we put together a few different membership appreciation events throughout the year, pre-COVID,” Bannister explained. These events include “things like quarterly parties, ladies night, game night, special charity WODs,” he said.

“During the Open we make it a huge deal,” he said. “We choose four teams — team red, team blue, team yellow, and team green. From there, we choose a member to be the team captain for each team. Those members are not the fittest, but sometimes the oldest, the rookie, the most consistent, etc. These members get together for a Facebook live and do a live draft of members to be on their team for the Open.”

“Also, we try to invite one local box to come in and compete on the last week of the Open,” he added. “The energy gets insane.”

The Open is “the best part of the year,” Miller said. “It’s so much fun. And then the community piece of it, and the energy is so awesome. When you got all the people in there, you got people judging and the music and the high-fives and the collapsing afterwards — I mean, it’s a special time.”

Having an extra push from that friend across the gym helps push him to new heights, Miller said.

“You know, you go to that kind of dark place when you’re on the rower and your eyes are closed and you’re just trying to just find some way through that next 500 meters or whatever, and you can hear, ‘Come on, David,’ from across the across the box, and just somebody saying your name — it just … gives you a little extra shot in the arm,” he said. 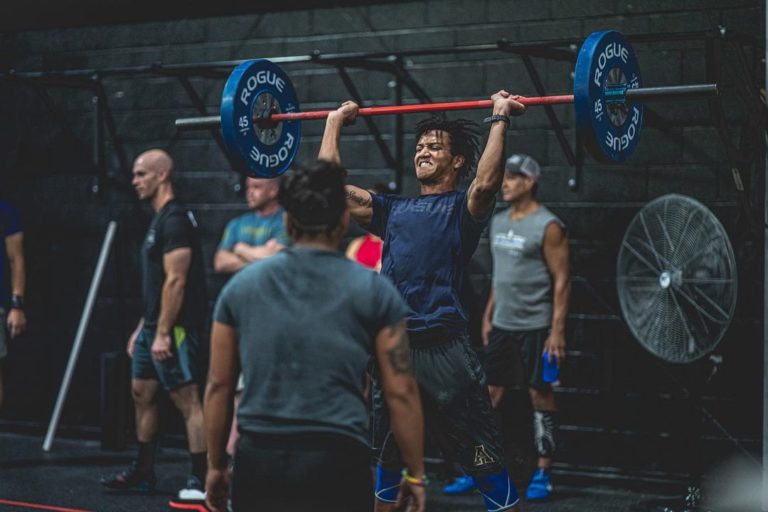 A Cabarrus athlete works on his jerks (via @crossfitcabarrus)

It’s just “that little extra push to know that somebody sees me,” he added. “That somebody’s watching.”

Bannister said these are the moments that make CrossFit special: “I think CrossFit is a great way to bond and form meaningful relationships because of the trenches athletes choose to go through together,” he said. “CrossFit is hard! There are some workouts that just hurt. To be able to push ourselves and do that with someone else is special. When the time runs out, the music turns down, everyone is on the floor covered in sweat, that is a moment you can look around and see that you were not alone.”