In this 2018 review, Drs. David Ludwig and Cara Ebbeling explain and provide support for the carbohydrate-insulin model of obesity (CIM).

In the carbohydrate-insulin model, the primary cause of obesity is found in the effect diet and other factors have on adipose (fat) tissue and the regulation of circulating fuels. Increasing insulin levels push circulating glucose out of the blood into storage by all tissues, including fat cells, while simultaneously suppressing the release of previously stored fatty acids by existing fat tissue. These and other effects lead insulin to shift consumed calories (energy) away from being used as fuel by lean tissues (e.g., organs, muscles, and the brain) and toward storage as glycogen and fat. In this model, the primary cause of obesity is an increase in insulin levels (either chronically or repeatedly), which leads to increased fat development, hunger, and reduced energy expenditure (1). Any diet, drug, or other factor that increases insulin levels can cause obesity.

The two models are compared in the figure below. 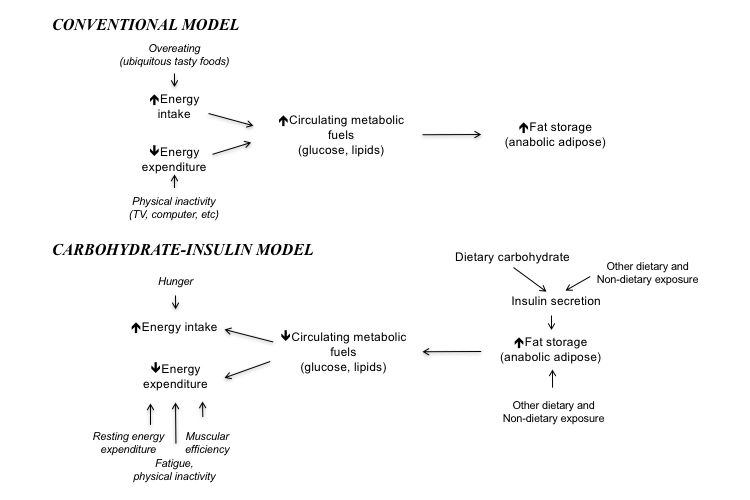 Ludwig and Ebbeling observe that dosing insulin to treat Type 2 diabetes or providing excessive insulin for Type 1 diabetes is obesogenic while providing insufficient insulin or pharmacologically suppressing insulin leads to weight loss (2). Animal research has shown that injecting insulin into rodents increases fat deposition and hunger, and insulin-treated rats will put on fat even if fed a number of calories that leads to overall weight loss (3). Mice bred to produce less insulin are protected from diet-induced obesity even when overfed (4).

The CIM predicts a diet that increases insulin levels would also lead to obesity. Carbohydrate intake has a large impact on blood glucose and blood insulin levels while protein has a moderate impact and fat has very little impact. The CIM thus predicts a diet high in carbohydrate and low in fat would be expected to increase insulin levels and so lead to obesity. The glycemic index and glycemic load predict this postprandial (i.e., after-meal) insulin response accurately, with highly refined carbohydrates and sugars leading to higher glucose and insulin spikes (5).

Two longer well-controlled human trials, Diogenes and DIRECT, found low-glycemic-load diets led to greater weight loss than high-glycemic-load diets (8). A third, DIETFITS, found no difference in weight loss induced by low-fat and low-carb diets (which differ dramatically in glycemic load), but both diets were designed to be “healthy” and therefore were absent any refined sugars or carbohydrates and low in glycemic load (9).

The metabolic benefits of carbohydrate restriction may increase over time, as the body takes two to three weeks to increase fat oxidation in response. Multiple studies have shown blood ketone levels continue to increase for at least three weeks after initiation of fasting or a ketogenic diet (10). After three weeks, nitrogen balance, initially negative on a low-carbohydrate diet, is normalized, indicating reduced reliance on protein as an energy source in the absence of carbohydrates (11).

In sum, the carbohydrate-insulin model suggests foods that elevate insulin shuttle metabolic fuels away from usage and toward storage, simultaneously increasing hunger, decreasing energy expenditure, and increasing fat storage. The cited literature shows this model is consistent with the observed differences between diets that differ in glycemic index and glycemic load and indicates reducing diet-induced insulin elevation will support weight loss.