One topic adjacent to the rotator cuff is an unpleasant one: shoulder impingement. Impingement is the impeding interaction of hard bony surfaces with softer muscular, connective, and neural tissues, causing pain. The conventional wisdom for the genesis of shoulder impingement syndrome is that the acromion process comes into contact with and impinges upon the tendinous underlying tissues. This is suggested to occur when the arm is lifted, bringing the humeral head and shaft into close proximity with the acromion. The idea is that this movement, when repeated over time, compresses and damages the softer tissues.

While this may actually occur, computer and physical models indicate the frequency of occurrence can be greatly reduced by simple instruction on overhead movement technique. How we position the arm in space has a tremendous effect on the distance between the acromion process and the humerus. If we start with the palm down and attempt to abduct the humerus to overhead, the humerus will interact with the acromion and inhibit further overhead motion. If we force it, impingement in the form of increased pressure on the soft tissues results.

If, however, at any point in the upward ascent of the humerus we externally rotate it, we increase range of motion before impingement occurs. 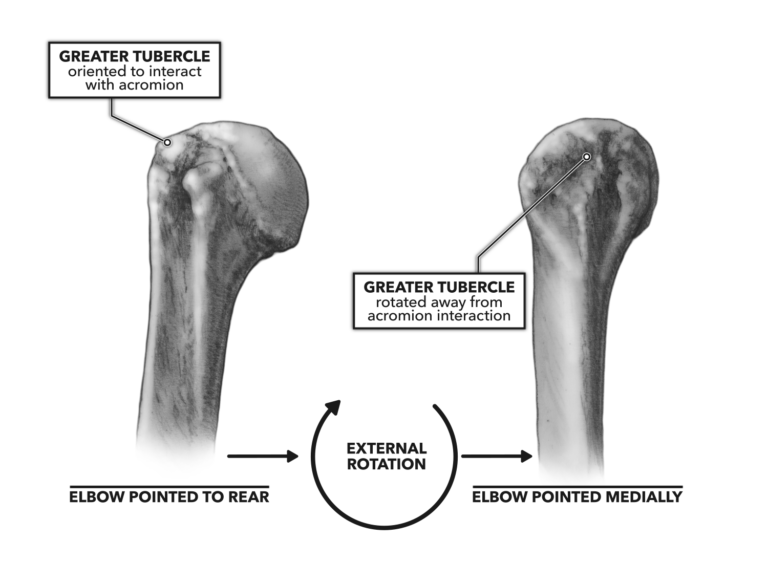 Figure 2: Simple rotation of the humerus at the shoulder reorients the greater tubercle away from the acromion process. Note the difference in protrusion profile between the two images. The rotated humeral head (right) curves down without protrusion, thus increasing the available range of motion. If we rotate the humerus as shown here, when raised overhead the elbow will move from pointing medially, to pointing inferiorly, and finally, laterally.

Figure 3: Rotating the humerus in the glenoid fossa creates more subacromial space and delays the point of contact.

Further remediation can be accomplished by simply allowing the scapulae to rotate medially. Using the trapezius to elevate and rotate the scapula with the aid of the serratus anterior, the spine of the scapula becomes more vertical, and this maintains the space between the acromion process and the humerus.

Figure 4: Rotating the scapula, a nearly involuntary effect when raising the arm overhead, aids in keeping the acromion process and humeral head apart. The combined effects of humeral and scapular rotation allow for arm orientations past vertical.