Note: This trial presents an additional summary of data previously discussed on CrossFit.com on May 14, 2019, and May 22, 2019.

This 2018 trial, funded by Virta Health, tested the impact of a high-compliance ketogenic diet on metabolic outcomes in Type 2 diabetics.

Nonalcoholic fatty liver disease (NAFLD) is an increasingly prevalent cause of liver damage and is found in 70% of obese, diabetic patients. No drugs have been shown to reverse NAFLD, and the current recommendation for patients with NAFLD (weight loss) is inconsistently effective. Low-carbohydrate diets and carbohydrate restriction have been shown to drive significant and rapid reductions in liver fat and liver enzymes. This trial was designed to test the impact of a ketogenic diet on various markers of liver health in highly compliant subjects over one year.

In this trial, 262 Type 2 diabetics were counseled to follow a diet that would achieve and sustain nutritional ketosis (i.e., blood BHB of 0.5 – 3.0 mmol/L). Each subject was given personalized, dynamic dietary guidance by a health coach who continuously communicated with each subject and tracked biomarkers via an app. As such, the specific diet varied by subject but generally involved 1.5 g/kg of protein intake and <30 g of carbohydrate intake per day, alongside non-starchy vegetables, multivitamins, and adequate fluids. Of the original 262 subjects, 218 completed one year of treatment.

At baseline, 95% of patients had NAFLD. Observed changes included (all figures refer to mean reductions; all listed changes were statistically significant): 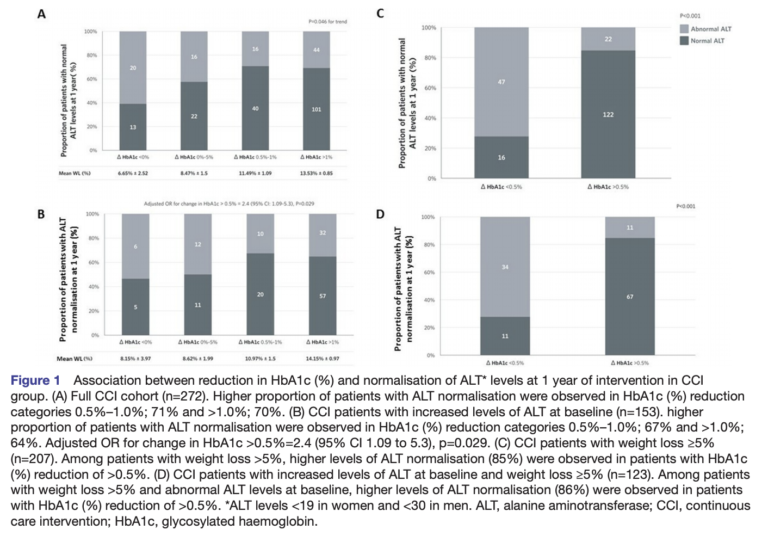 Collectively, these results demonstrated that compliance with a ketogenic diet for one year led to significant reductions in liver fat content and liver fibrosis. While a strict interpretation of these results does not allow extrapolation to other interventions, it would be reasonable to expect any diabetic patients following a ketogenic diet for one year to exhibit similar outcomes. Most importantly, 61% of patients with abnormal liver enzymes at baseline showed normalization (and an even higher percentage of patients concurrently showed significant weight loss and/or HbA1c reduction), which suggests compliance with a ketogenic diet can drive significant improvements in liver health over time.