This 2018 trial, funded by Virta Health, tested the impact of a high-compliance ketogenic diet on metabolic outcomes in Type 2 diabetics.

Existing evidence (some of which has been previously reviewed on CrossFit.com) suggests low-carbohydrate diets, especially ketogenic diets, can produce rapid and clinically meaningful reductions in blood sugar and other metabolic markers in Type 2 diabetics. Many real-world trials of ketogenic diets, however, show comparatively limited benefits, as many diabetics struggle to follow a ketogenic diet without substantial support. As a result, there is little to no evidence of the impact of a ketogenic diet on diabetes over a longer duration.

In this trial, 262 Type 2 diabetics were counseled to follow a diet that would achieve and sustain nutritional ketosis (i.e., blood BHB of 0.5 – 3.0 mmol/L). Each subject was given personalized, dynamic dietary guidance by a health coach who continuously communicated with each subject and tracked biomarkers via an app. As such, the specific diet varied by subject but generally involved 1.5 g/kg of protein intake and <30 g of carbohydrate intake per day, alongside non-starchy vegetables, multivitamins, and adequate fluids. Of the original 262 subjects, 218 completed one year of treatment.

At baseline, 93% of subjects were obese and 57% were on a diabetes medication other than metformin. Over one year, treated subjects showed the following outcomes:

All of the above outcomes were statistically significant. 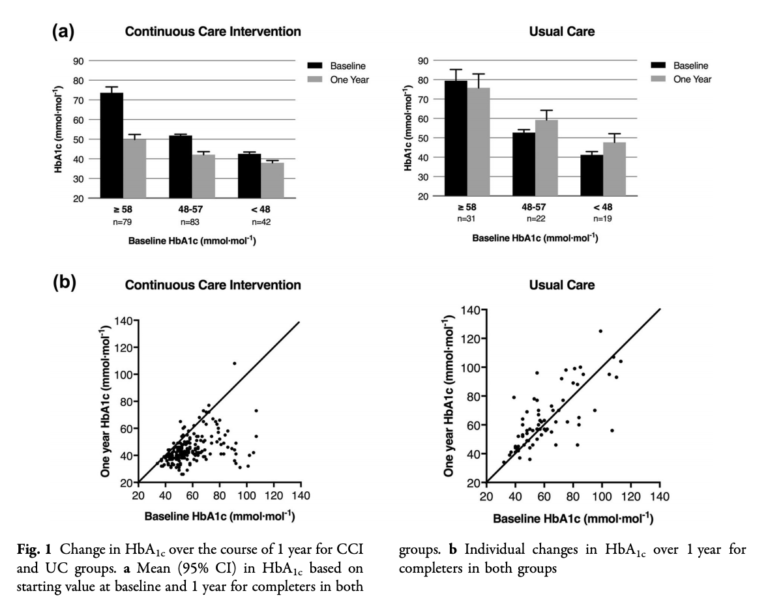 Nearly half of all subjects were able to discontinue their diabetes medication, including 40% of those taking insulin. Mean insulin dose among those still taking insulin at one year decreased from 105.2 to 53.8 units per day.

Sixty percent of participants reduced their HbA1c to <6.5% and were off all diabetes medication or down to metformin only at the end of the study; they therefore no longer met the criteria for diabetes on the basis of HbA1c. 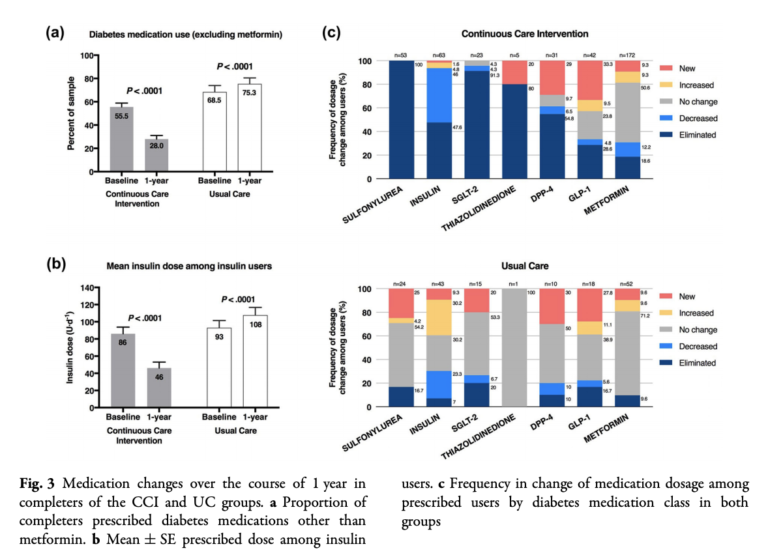 The majority of these improvements occurred within the first 70 days of treatment, but blood BHB levels showed subjects maintained mild nutritional ketosis out to one year, which suggests continued compliance with the diet.

A couple of points about this trial need to be noted. First, the trial was funded and run by Virta Health, a private company that sells the app used in the trial to privately insured employers; as such, the trial involves a conflict of interest similar to a pharma-funded drug trial. Additionally, the 262 subjects all chose to opt into the Virta program and were neither randomized nor blinded.

Despite these issues, the significance of this trial can hardly be overstated. This trial represents the first clear, long-term evidence in a large population that a ketogenic diet, when followed properly, can lead to significant improvements in health among Type 2 diabetics, and in many cases (in this trial, the majority) even resolves diabetes completely. In the narrow sense, this demonstrates that Virta’s methodology is a uniquely powerful tool for improving the health of diabetic populations. In the broad sense, it demonstrates that a dietary shift alone can drive rapid, meaningful clinical improvements. It would be reasonable to expect that other diabetics able to comply with a ketogenic diet for one year or more would see similarly dramatic improvements.