Beneath the dance club’s flashing lights, Jules King turned and twirled her grief away.

She’d fallen in love with his smile.

“You know when someone really understands you for who you are?” said King, now 43. “That’s what he was like; we were just a match made in heaven.”

The bass pulsed in her chest as she bobbed and swayed, until, inexplicably, the big toe of her right foot flexed upward and stiffened.

“I could not relax it to save my life,” King recalled.

She shrugged the incident off after the digit relaxed overnight. But she would later identify the blip as the first symptom of early onset Parkinson’s disease, a condition that would eventually strip her of independence.

“I couldn’t do anything for myself at that point,” she said. “Couldn’t even scratch an itch.”

“We’ve heard from scores of athletes who have used CrossFit to slow, combat, or reverse a range of chronic diseases they believed would result in their inevitable decline. Such stories may seem anecdotal and even magical in isolation, but collectively, they supply the data that shows the CrossFit formula works.”

Parkinson’s disease (PD) is an incurable and progressive disorder of the nervous system causing tremors, involuntary and/or slow movement, muscle rigidity, impaired balance, and — for some — cognitive decline. Although not fatal, symptoms of PD tend to worsen over time, even with medication.

The second-most common neurodegenerative disease after Alzheimer’s, PD is most often diagnosed in people over 50. King was 33 when she received her diagnosis — and even that was 16 years overdue.

In the two years after the episode at the club, King began to experience even more puzzling symptoms.

“I was always grooving in the kitchen,” said King, who practiced ballet, “and I lost my rhythm.”

Her left leg began to lag, and she struggled to keep her balance. She suffered from overwhelming fatigue and full-body aches.

In 2001, King was fired from her position as a nursing assistant.

“‘The patients are supporting you,’ King quoted her boss, ‘rather than you supporting them.’”

In her search for answers, King visited specialist after specialist, including two neurologists. None knew what was wrong — until, in 2003, a general practitioner diagnosed her with myalgic encephalomyelitis (ME), also known as chronic fatigue syndrome.

“He basically said, ‘Go home … and go to bed and treat yourself like you’ve got the flu for a year,’” King recalled.

But resting didn’t help. And as her balance and mobility declined, she became prone to falls. 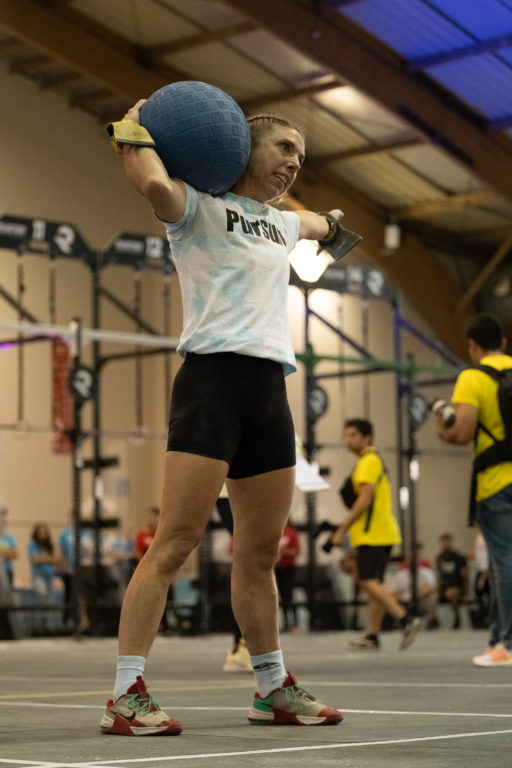 “My top half would go, but my bottom half would stay where it (was), almost like I had lead in my boots,” King said.

Unable to safely carry items while moving about, King relied on her parents and siblings to help care for her home and two children — her second child, a son, had been born shortly before she received her ME diagnosis.

“When my son was a baby, I used to have to crawl across the floor because it was too dangerous to walk with him in my arms,” she said. “He used to grab onto my back like a little monkey.”

When King could no longer walk any distance at all without falling, she became wheelchair bound, taking up smoking to help her muscles relax. Even though she hated the habit, the nicotine helped quell the spasms.

But smoking can increase the risk for arterial thrombosis, or blood clots in the arteries. And having inherited her family’s antithrombin deficiency — a disorder that increases the risk for abnormal blood clots — King was on borrowed time.

In 2013, at 33, King was admitted to the hospital with a case of deep vein thrombosis. Her clot extended from her left calf to her groin. By the time she was discharged three weeks later, she could no longer feed or dress herself — or even scratch an itch.

“I came out as pretty much a cabbage,” she said.

King remained in this “cabbage” state for about two years. It wasn’t that she was paralyzed; rather, it was just extraordinarily difficult for her to move.

“It was like I was fighting something all the time,” she said. “It was really hard to reach for anything.”

Although she maintained a positive attitude — “I refuse to be trodden down by anything,” she said — King longed to walk. And run. And dance — a sign perched over her kitchen doorway declares, “This kitchen is made for dancing.”

In November 2015, after King began to have difficulty swallowing, an occupational therapist came to King’s home in Pembrokeshire, Ireland.

“These symptoms aren’t of ME,” she told King. “You need to go and see a neurologist.”

Though King had seen neurologists before, she tried her luck on a third, who promptly diagnosed her with Stage 5 PD — the most advanced form of the disease — and prescribed levodopa. The first pill didn’t seem to have much of an effect.

“(After) the next tablet, I was walking,” King recalled.

The proper diagnosis and medication was life-changing for King. While still not completely independent, she could now walk short distances and feed and clothe herself.

But she wanted more. Even with the medication, which wore off quickly, she still struggled with coordination — she could not hold an object and walk at the same time — and she still frequently fell. Doctors said further improvement was unlikely. King disagreed.

So in 2016, she began taking walks, setting a goal to complete a lap around a nearby 2K (approximately 1.2 miles) running course without stopping. She did it in six weeks.

“I’m gonna go and do a triathlon now,” she joked to her doctor.

“I know you’re a fighter, but you physically can’t do that; it’s not possible,” he replied.

All King heard was “impossible” — and she accepted the challenge.

A year later, she walked back into her doctor’s office wearing her athlete T-shirt from the 2017 Pembrokeshire Olympic-distance triathlon.

“CrossFit’s results feel like magic only where we have outpaced the science that would explain them. It often takes years for the scientific community to set up experiments to test what we are doing and affirm what we already know.”

It was just before 9 a.m. on a September morning in 2021. King sat in her car in the parking lot at CrossFit Pembrokeshire, where her daughter had been training for the previous year. Gazing through the window at the muscled athletes heaving barbells around the room, King had a panic attack.

“They all looked so strong and so fit,” she said.

She turned around and went straight back home.

“And then I got home and I went, ‘Why did you do that?’” King recalled. “‘You want to try this; you really want to challenge yourself.’”

King returned the next day and was greeted by affiliate owner Samantha Feneck, who immediately put her mind at ease.

“She just welcomed me with open arms, and I didn’t feel different to anybody else,” King said. “It was absolutely amazing.”

Feneck had had some experience training athletes with neuromuscular issues — another member at the gym had multiple sclerosis — but she’d never worked with someone with Parkinson’s before. 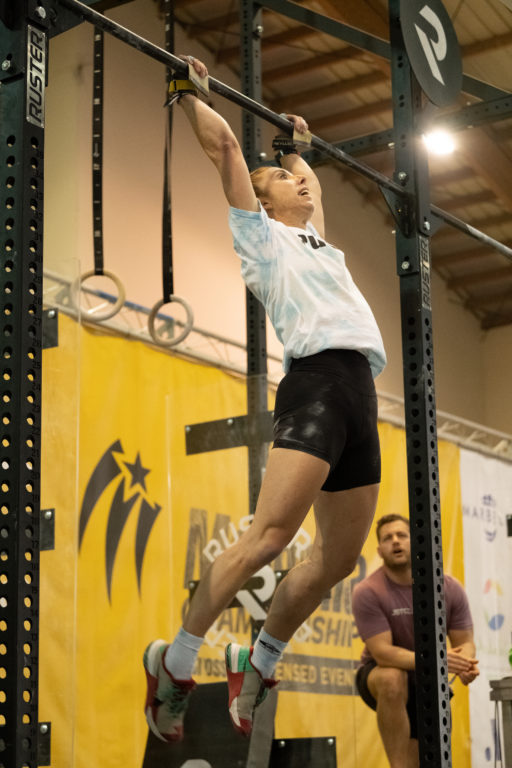 In addition to King’s propensity to tip over, she struggled with grip, her hands sometimes locking in place around whatever she was holding. She also experiences dyskinesia, a side effect of levodopa that causes involuntary and uncontrollable movement. In King’s case, her legs often spontaneously begin to march rapidly in place.

So what’s a coach to do with an athlete who dances uncontrollably and frequently falls down?

“For me, it was bringing it right back to basics,” Feneck said.

As with any new CrossFit athlete, they began with the air squat, gradually increasing load as King became more proficient with the movement.

From there, training has been a process of trial and error for both coach and athlete. They found that King could lunge quite well with a barbell on her back, but the moment she paused to rack the load back onto the rig, her legs would begin to spasm. Box jumps she could manage if her medication was fresh; after it wore off, she modified to step-ups.

Putting weight overhead was the toughest riddle to solve: It seemed that no matter how light the load, a push press would give her entire upper body the shakes — unless King kept her gaze on the floor.

“It might be the complete opposite to our average (CrossFit athlete), but it works for Jules as long as she’s still safe,” Feneck explained.

Keeping King safe also means staying nearby in case she needs a sudden spot — if, for example, she falls backward on a clean or freezes in place with a barbell on her back.

“It’s just understanding when she needs help,” Feneck continued. “We’ve just built up our relationship over time, really. … I swear she can just look at me and I can read her mind.”

It’s a skill Feneck has dedicated to teaching the rest of the coaching staff, too. After King joined the gym, Feneck used one of the gym’s monthly staff training sessions to bring her coaches up to speed on King’s needs and how to keep her safe during class.

Part of that training, Feneck said, was teaching coaches to be honest about their own limitations.

“Just be open and honest with her and say, ‘Jules, I don’t know if you can do this; can you do it?’” she said. “Because people … have so much more respect for you if you go, ‘Look, I’ve never done this before, and I’m going to do my absolute best to do everything that’s going to be right for you. If you can’t do something and you find it uncomfortable, please just tell me, I’ll change it.”

“The results we experience when we put in the work and commit to CrossFit’s fitness recommendations feel like magic.”

King knew CrossFit was working when she could get out of bed easily before taking her morning pills.

“Before I take them, I’m quite stiff,” she explained. “But then all of a sudden I developed core strength, and I was able to push myself up.”

She’s been collecting PRs outside the gym, too, now able to walk the dog on her own and help with the housework.

“I can even carry a cup of coffee without spilling it,” she said.

And since starting CrossFit, King said, her falls have become less frequent.

“I don’t fall over hardly ever now,” she said. “Daily activities are so much easier.”

She also estimates that CrossFit has helped improve her brain-body connection.

“I think CrossFit helps me because (of) the high intensity and having to think at the same time,” she explained. “If I reached out for a drink before, if my medication wasn’t working, I’d be going really slowly. Now, I feel like the message just gets through a lot quicker.” 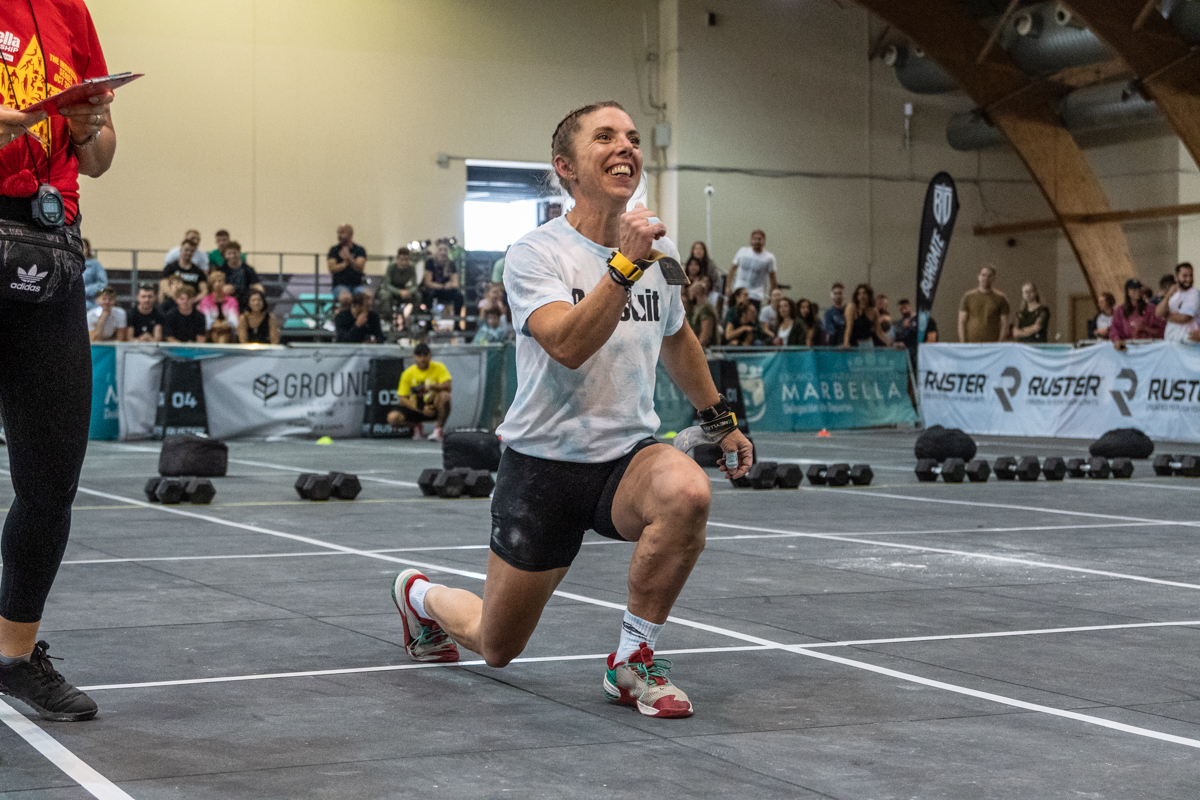 Eight years ago, King couldn’t walk through her kitchen unassisted. This year, she rang in 2023 with a mother/son dance.

In February, she plans to compete in the 2023 NOBULL CrossFit Games Open. Last year, she took 23rd in the women’s Multi-Extremity division. She’s also competed in several competitions around the world with the aim of spreading the message that “everyday life can be much better after your diagnosis through CrossFit.”

It’s a refreshing contrast to the common rhetoric counseling people with Parkinson’s disease, which is uninspiring at best.

Many sources encourage those with PD to exercise, noting that physical activity may increase muscle strength, flexibility, and balance, yet such recommendations often read like afterthoughts and lack specificity.

But as Nicole Carroll, CrossFit’s General Manager of Training and Education, writes, “CrossFit’s results feel like magic only where we have outpaced the science that would explain them. It often takes years for the scientific community to set up experiments to test what we are doing and affirm what we already know.”

Watch: “Why a Doctor Treated His Own Disease With CrossFit”