Even if he were, the sidewalk lining the block of his quiet, residential neighborhood in Belfast, Ireland, was unlikely to be metallic. And he was pretty certain he hadn’t stepped in any glue.

So why wouldn’t his right foot move?

He stared at it for a few seconds.

The strange September 2018 incident was the latest in a string of odd occurrences — cramps, twitches, and tremors in his legs and left hand — that prompted Hanley to consult a neurologist.

Three months later, results from a DaTscan imaging test were conclusive: Hanley had Parkinson’s disease (PD), a progressive and incurable disorder of the nervous system primarily affecting movement. The disease, which an estimated 8.5 million people worldwide had in 2019, is characterized by motor impairments — such as tremors, slow movement, muscle rigidity, and imbalance — as well as cognitive decline. The rate of progression varies by individual, but often results in major disability after the 10-year mark.

There is currently no treatment for PD, although sufferers may be prescribed levodopa, a dopamine-replacement agent used to control symptoms of PD. In Hanley’s case, the drug only worsened them.

At that point, “the medical advice was, you know, ‘There’s nothing we can do for you here. Come back when you’re much worse,’” Hanley recalled. 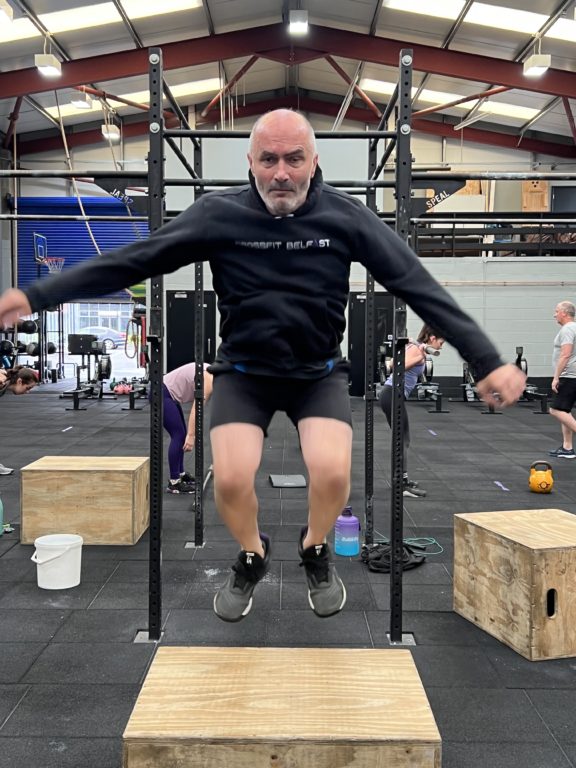 Though Hanley’s symptoms were mild at the time of diagnosis — he was diagnosed with Stage 2 PD, considered to be a moderate stage of disease development — they worsened over the next 18 months. He described his left hand as “unreliable,” recounting the time he involuntarily flung his iPhone across the room while attempting to open his calendar app. Precise movements such as inserting a key into a lock became challenging, and the “sticky leg” syndrome continued to plague him at the most inopportune times — including while in line waiting to go through airport security and while exiting his car on the side of a busy road.

But the most debilitating moments came late at night as he was lying in bed, desperate to sleep and tormented by cramps.

“Your legs would just be moving constantly,” Hanley said. “You’re dancing like Elvis Presley, trying to push the cramps out, and you had no control over it. You’d wake up upside down, (hanging) over the bed.”

Hanley became so sleep deprived he began having delusions, once getting lost on his way home to the house he’d lived in for more than two decades.

With worsening symptoms and poor response to the levodopa, there was little to be done but wait for his inevitable decline. In seven to 12 years, Hanley estimated, he’d need to move into assisted living.

“It was clear that conventional medicine … had little or nothing to offer me other than six-monthly reviews,” he said.

So Hanley hit the books.

Unwilling to resign himself to an early move-in date at the nursing home, Hanley scoured the web for strategies to combat the symptoms of PD. Two stuck out as the most effective: learning a new skill, such as playing a musical instrument or taking up knitting, and exercise.

So it only made sense to Hanley to combine them.

“I’m going to start doing exercise,” he thought to himself, “but I’m gonna do exercise that’s intense and cognitively challenging to me.”

At the time — about halfway into 2019 — Hanley was fairly sedentary. He coached a youth rugby team and took his dog for daily walks, but he was overweight and suffered from hypertension. Other than a brief stint training with one of his rugby athletes — the kid needed clients, and Hanley bought a block of sessions as a favor — Hanley rarely went to the gym. And by the time he decided to try using exercise to stave off the symptoms of PD, gyms across Northern Ireland were closed due to the COVID-19 pandemic.

So he trained in his backyard, following YouTube videos and high-intensity interval-training and boxing apps. The goal was to stimulate his mind by avoiding routine, and by early 2021, he’d seen some improvement in his PD symptoms.

“I was pretty convinced at that point that the sum of one plus two was indeed greater than three,” he said, referring to the exponential benefit of combining physical and mental intensity.

Around that time, Hanley came across an article about a 60-something-year-old man who’d improved his health through CrossFit. So when lockdown restrictions were lifted in Belfast in March 2021 to allow outdoor group training, Hanley joined CrossFit Belfast. 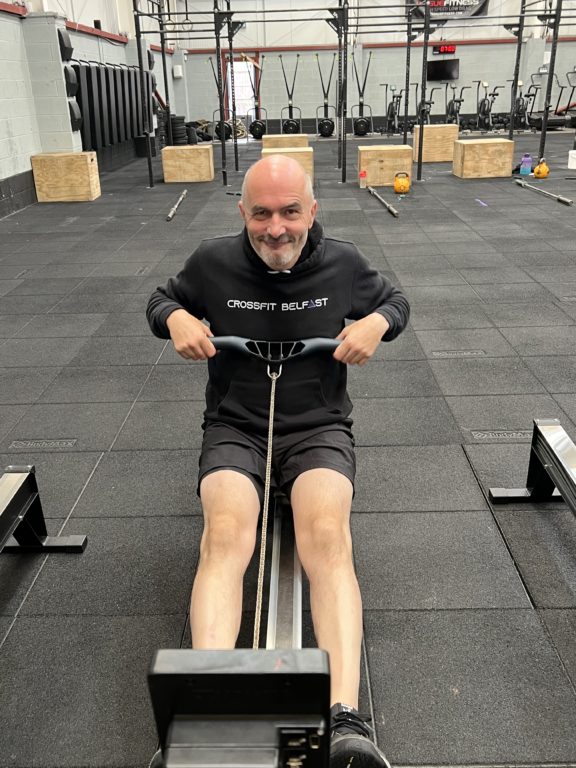 Hanley began with a series of one-on-one introductory sessions at the affiliate before joining regular classes in May of 2021, training three times per week. In addition to the challenges common to the newbie CrossFit athlete, he also faced struggles unique to PD: difficulty gripping the barbell, for instance, and keeping his balance.

That’s where excellent coaching came in.

“The level of instruction and guidance during a WOD was superb,” Hanley said.

If he couldn’t hold a barbell overhead? No problem. He’d do the workout with light dumbbells instead.

“It became really, really obvious that there was an infinite amount of ways to scale any workout,” he said.

Plus, those infinite possibilities multiplied by constantly varied workouts presented exactly the cognitive challenge Hanley was looking for. After all, routine is the enemy.

“It became pretty obvious pretty quick that this was the Holy Grail for what I wanted,” he said.

By July 2021, after just three months of CrossFit, Hanley described himself as “95% symptom free.”

No tremors. No “sticky” feet. Sleeping through the night. (The 30 lb he lost, plus the 60% reduction in blood-pressure medication, were just gravy.)

In December of 2021, Hanley had a check-in with his neurologist, who brought along two of his colleagues to witness the spectacle that was Hanley’s improvement. The specialists put Hanley through a full neurological assessment in which, among other things, Hanley demonstrated his newfound ability to bring together his left thumb and index finger quickly and repeatedly — something his neurologist had never seen him do.

“I’ll do this until my arm falls off,” Hanley told them.

“This case is hugely significant,” they said in response. “We’ve never seen anybody reverse Parkinson’s symptoms; to our knowledge, it’s never been reported in the Western world.”

The doctors are currently studying scans of Hanley’s brain to gain further insight into his miraculous 180. But Hanley doesn’t need to see the paperwork.

“This case is hugely significant. We’ve never seen anybody reverse Parkinson’s symptoms; to our knowledge, it’s never been reported in the Western world.”

Today, Hanley remains 95% symptom free and continues to train at CrossFit Belfast three times per week alongside athletes of every age and ability.

“I love the community aspect of it,” he said.

Where once he struggled to grip a barbell, Hanley can now press, clean, and jerk with the best of them.

“I can do pretty much anything,” he said.

“Apart from I haven’t mastered double-unders,” he added.

And while Hanley’s Parkinson’s isn’t technically cured, he’s pretty sure he won’t be moving into an assisted-living facility any time soon.

“I am free of all Parkinson’s symptoms, and beyond any doubt, this is due to my joining CrossFit Belfast,” Hanley said. “It has transformed my life.”