In this review, Richard Johnson et al. argue fructose—which makes up half of table sugar and high-fructose corn syrup—has a unique metabolic impact that might directly lead to diabetes, particularly when consumed in excess of 50 grams per day.

Fructose, unlike other sugars, is directly metabolized in the liver, where it increases liver fat, raises triglyceride levels and increases uric acid when consumed chronically. Over time, this can lead to insulin resistance; hypertension; damage to the liver, kidneys and blood vessels; metabolic syndrome; and diabetes. Human, animal and epidemiological studies are reviewed supporting both the correlation between increased sugar intake and metabolic disease on a population level and the various mechanisms by which fructose can lead to metabolic damage.

They conclude that the current evidence suggests sugar is detrimental in more ways than merely being “empty calories,” and that if additional research supports the hypothesis that fructose (and so sugars) promotes metabolic disease, it would suggest removing fructose from the diet can prevent obesity and metabolic syndrome, as well as the conditions that follow from them. 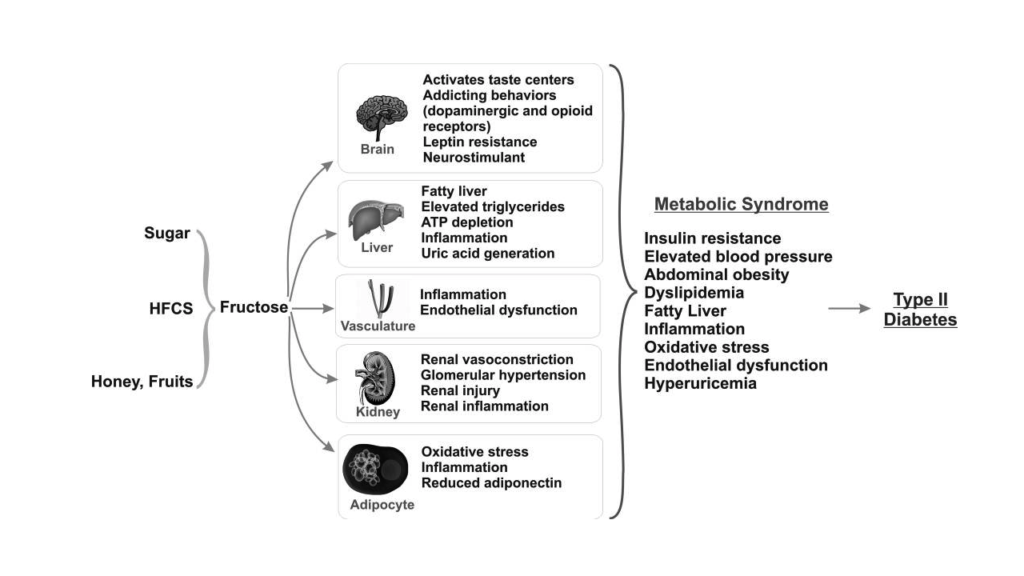 From Hypothesis: Could Excessive Fructose Intake and Uric Acid Cause Type 2 Diabetes?: Figure 2—Effect of fructose on various organ systems. Table sugar, HFCS, and natural sources provide fructose, which in excess has numerous effects on the brain, liver, vasculature, kidney, and adipocyte. The net effects induce all features of the metabolic syndrome and ultimately Type 2 diabetes.