The medial hip musculature consists of several muscles whose primary function is to adduct the femur at the hip. The muscles attach to the anterior and inferior pelvis (pubis and ischium) and cross the hip to attach along the length of the medial aspect of the femur. One of the muscles, the gracilis, also crosses the knee and has a distal function. 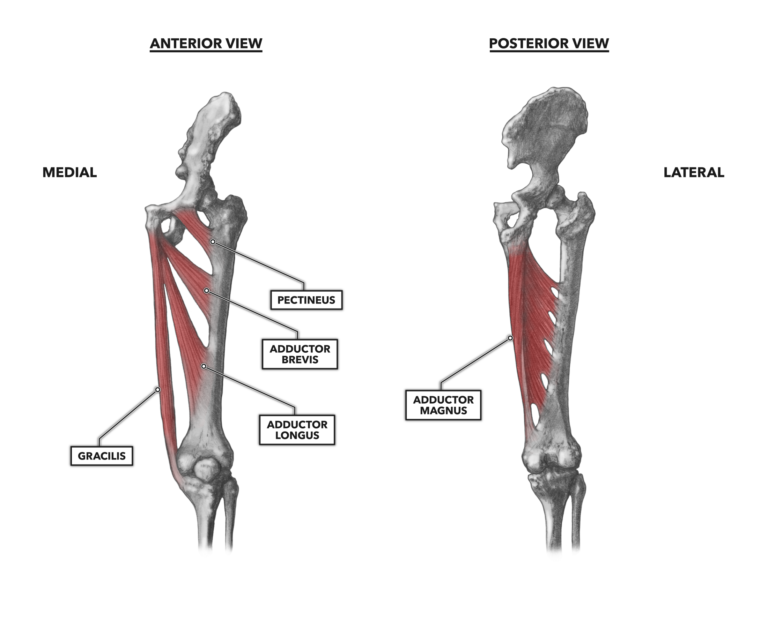 Pectineus – This is the most anterior of the adductors of the femur. It attaches proximally at the pubis and then courses to the posterior, inferior, and laterally until it reaches its distal attachment on the lesser trochanter and linea aspera. It is primarily an adductor, but its orientation also can support medial rotation of the femur and hip flexion. This is a very small strap-like muscle, and like most small muscles at large joints, it is not a primary mover; rather, it is much more active in maintaining posture when the foot is stable.

Adductor brevis – The adductor brevis is a deep hip muscle and does exactly what the name implies: adducts the leg. It is, as the term brevis implies, small. It attaches proximally to the pubis between the gracilis and obturator externus, and it is posterior to two other adductors: the pectineus and adductor longus. Distally, it attaches along the femur, from the lesser trochanter downward along the linea aspera for a short distance.

Adductor longus – The adductor longus attaches proximally on the inferior surface of the pubis. Its fibers are oriented to course laterally to its distal attachment, from the middle third of the linea aspera of the femur and downward along the shaft. As the name implies, it is an adductor of the femur, but it can also assist in medial rotation of the leg.

Gracilis – The gracilis is a long, superficial muscle on the medial side of the femur. It creates a significant portion of the silhouette of the inner thigh and courses from its proximal attachment near the pubic symphysis to its distal attachment on the inferior surface of the medial tibial condyle. Its adductor function is quite apparent by its location. It can contribute weakly to hip flexion and knee flexion.

Adductor magnus – The adductor magnus is the largest and most powerful of the adductors of the femur. As with the other adductors, it is located on the femur’s medial side. Sometimes the muscle is considered to have two discrete segments: the adductor segment and the hamstring segment. The adductor segment attaches proximally on the inferior side of the pubis, and the hamstring segment attaches to the ischial tuberosity. Understanding the muscle as two segments is probably unwarranted, however, as the attachment is singular and contiguous, and the muscle is not part of the hamstrings — it is only close to them. The muscle attaches distally to the lower half of the femur along the linea aspera, terminating at the medial epicondyle. Its orientation, anterior-posterior, makes it a mild contributor to hip extension when standing — more so when rising from a deep squat to standing. This is not a unique function, as other adductors do this too; this is just the one with the biggest impact.

One other architectural feature of the adductor magnus makes it unique among the adductor group. Along the femur, the muscle has crudely arched openings called osseoaponeurotic openings. Femoral circulatory vessels pass through these openings.