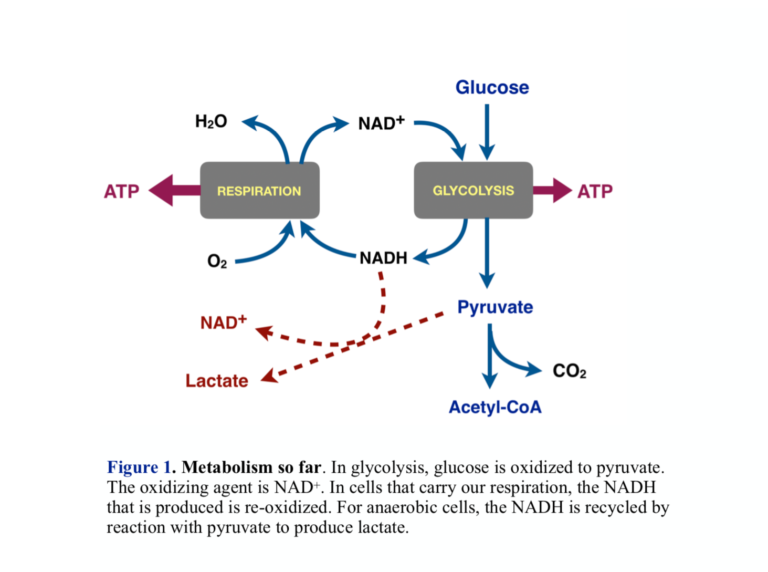 Because of the need to maintain control and avoid the high temperatures that might be required for big chemical changes, biochemical processes generally proceed in many small steps. Respiration comprises two major components. The first is the so-called Krebs cycle, or tricarboxylic acid (TCA) cycle, in which acetyl-CoA is oxidized to CO2 by redox coenzymes, the main one, again, NAD+. The product, NADH, along with NADH from other processes like glycolysis, is funneled into a second process called the electron transport chain, a process vaguely analogous to electrical conduction, but at the end of the chain, at last, molecular oxygen is reduced to water. 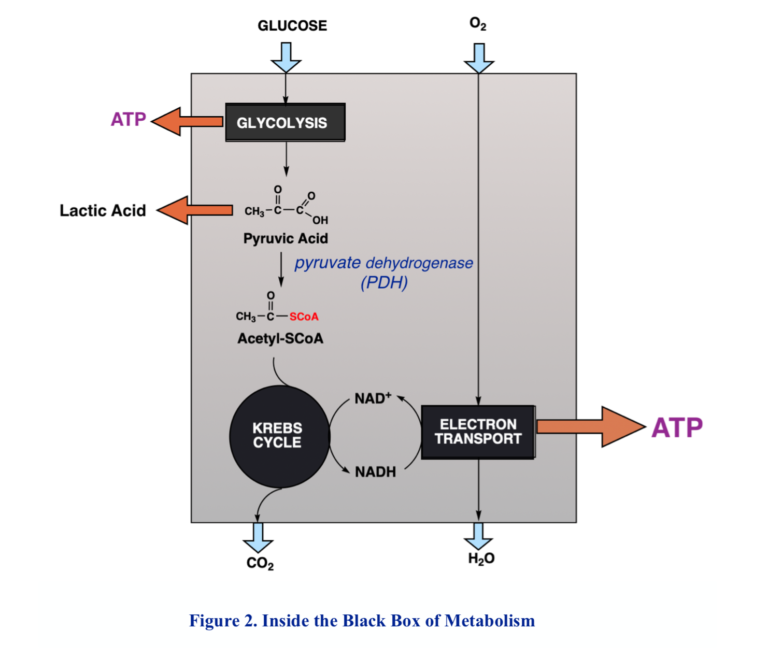 The functional phases of metabolism are separated in space as well as activity. The pill-shaped structure, the mitochondrion, is the site of oxidative processing. Two membranes enclose the interior space, which is called the matrix. The outer membrane is a barrier to certain substances, but it is the inner mitochondrial membrane that contains the machinery for metabolic processing. The inner membrane has high structure with extensive invaginations called cristae. The enzymes and proteins that carry out the final oxidations and generation of ATP are embedded in the inner membrane.

The importance of this cellular structure and the visible, morphological changes that accompany the cancerous state have encouraged us to look for extensive breakdown in the mitochondrion in understanding cancer. While there are some cancers with clearly disrupted mitochondria, the organelle is not generally smashed up, and in fact, many cancers have well-functioning mitochondria. We have to look for more subtle changes. In fact, lots of things can go wrong. Here’s one: Entry of pyruvate into the mitochondrion is disrupted in most cancers. 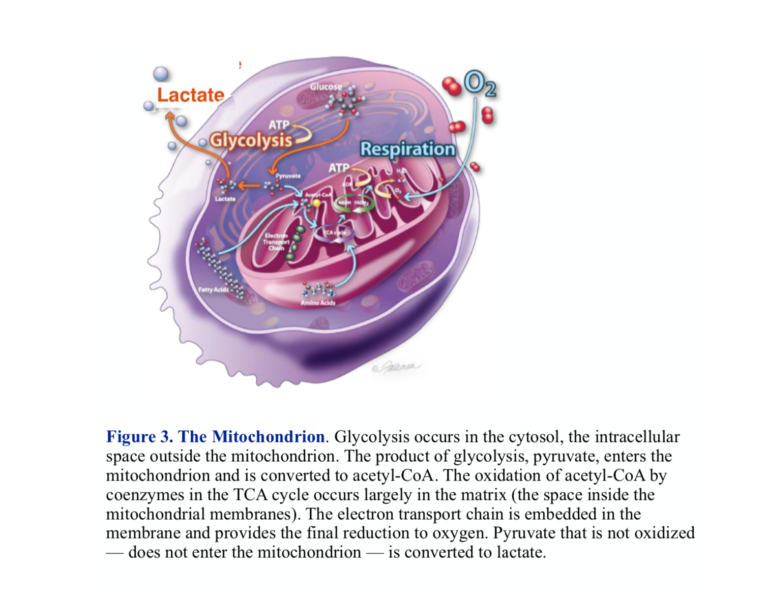 Pyruvate enters the mitochondrion through the MPC protein transporter that comprises two subunits called MPC1 and MPC2. Right off, there is potential for trouble. It turns out both subunits are required for normal oxidative metabolism, and most cancers show a reduced expression or absence of either or both of these carriers. Most often it’s MPC1. The identification of the genes controlling the MPC complex has allowed a test of what would happen if you could get the gene to re-express MPC and whether this would be beneficial. John Schell, et al. were able to modify cancer cells growing in culture to re-express both MPC1 and MPC2 (1). The modified cells showed reduced reliance on glycolysis and increased uptake of pyruvate into the mitochondrion compared to control tumors. In addition, when xenografts (from other animals) in mice were prepared, those grafts with re-expressed MPC1 and MPC2 shrank in size compared to the control tumor (Figure 4).

So, some cancers show the defect in the ability to get pyruvate into the mitochondrion. This has bearing on the possible molecular basis of the Warburg effect — i.e., the connection between glycolysis and respiration. It turns out that that is probably only part of the picture. Processing of the pyruvate that enters the mitochondria is where a lot of the action is. To understand this, we take a short digression on enzymes. 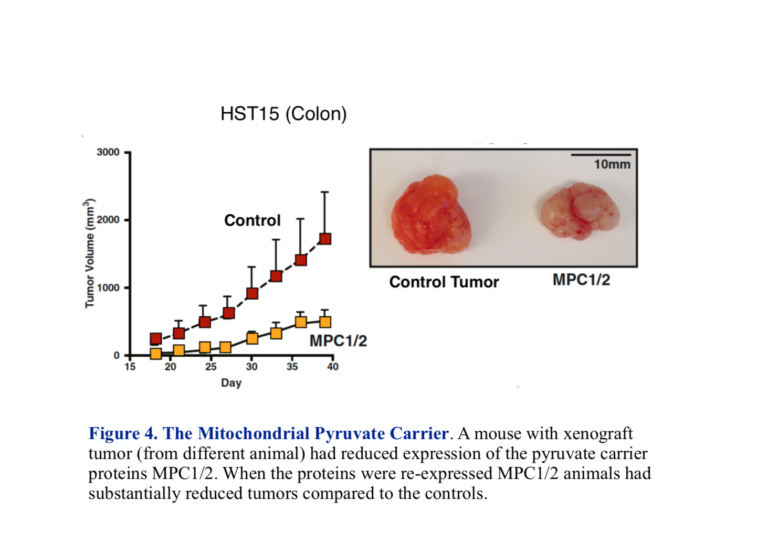 All biochemical reactions are controlled by enzymes, which are proteins that perform as catalysts. A catalyst increases the rate of a chemical reaction and provides control. For reactions that are reversible, the enzyme will catalyze the reaction in both directions. It will only allow equilibrium to be attained faster.

The names of enzymes roughly tell you what reaction is catalyzed (although there are many old traditional names that are not always informative).

Much of metabolism depends on regulation of enzymes by chemical modification. Of overwhelming importance are phosphorylation and dephosphorylation — i.e., the transfer and removal of phosphate units. The source of phosphate transferred to substrates is ATP, and the majority of enzymes that perform that function are called kinases. Enzymes that undo the effect of kinases, that catalyze the breakdown (hydrolysis) of phosphorylated compounds, are called phosphatases. If the substrate is a protein, the enzymes are referred to generically as protein kinases and protein phosphatases unless the particular protein is specified. Tyrosine kinases are protein kinase, which specifically modify the tyrosine residue within a protein (not free tyrosine).

Modern cell biology is about the spectrum of hundreds of kinases and phosphatases that keep the cell in a particular functional state. The term kinome is sometimes used to describe this array of enzymes and substrates.

Pyruvate dehydrogenase (PDH) represents a key control point in energy metabolism. The immediate link between glycolysis and respiration, PDH catalyzes the transformation of pyruvate into acetyl-CoA, the substrate for the TCA cycle. 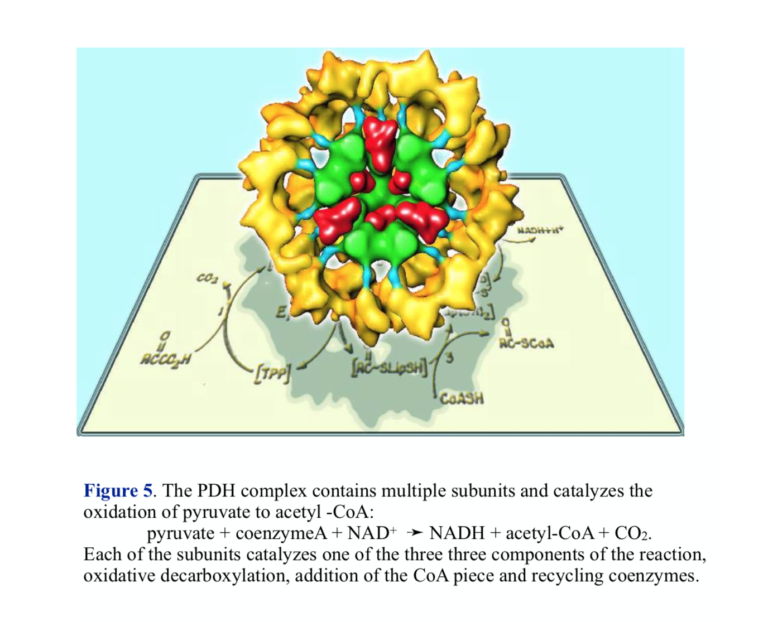 The overall oxidation of pyruvate to acetyl-CoA is as written above, but the reaction actually proceeds in three steps involving three different enzyme activities. The structure of PDH reflects the complex nature of the chemistry — there are multiple copies of each of the enzymes, and PDH is sometimes referred to as the pyruvate dehydrogenase complex (PDC). The three enzymes carry out the components of the reaction: 1) oxidative decarboxylation with attachment to lipoic acid coenzyme, 2) transfer of coenzyme A, releasing reduced lipoic acid, and re-oxidation of lipoic acid by flavin and NAD+.

If there is little glucose, pyruvate will be provided by the metabolism of protein and the conversion of amino acids into pyruvate or other substrates for gluconeogenesis. Under these conditions, most acetyl-CoA comes into the mitochondrion from fat, so this is the point at which fat and carbohydrate metabolism meet. Here, we are looking at the site of regulation for ketogenic diets. To understand PDH, we have to ask the question: On a low-carbohydrate or ketogenic diet, how does the mitochondrion know to turn any pyruvate into glucose rather than acetyl-CoA, and how does it know to use incoming fat for aerobic metabolism? 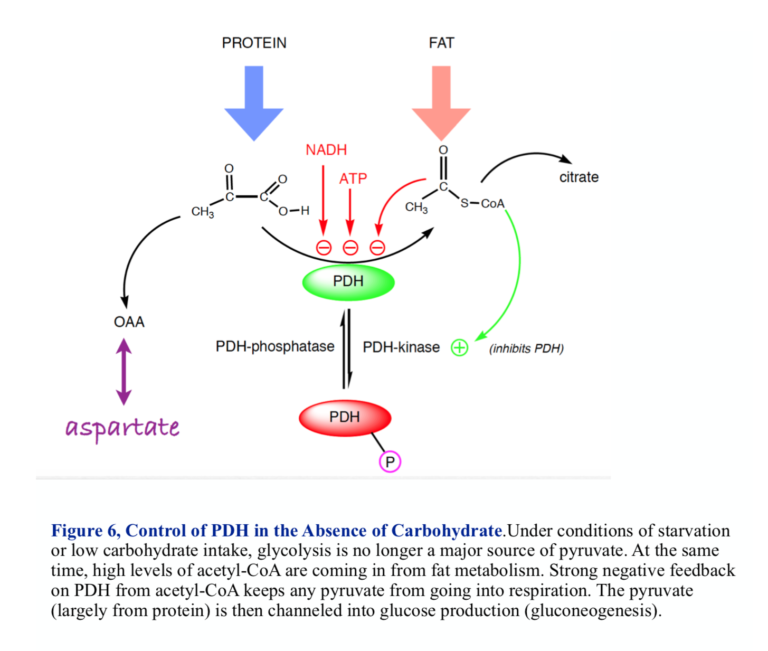 Acetyl-CoA, the product of the PDH reaction, regulates its own production. Strong negative feedback keeps the cell from turning pyruvate into acetyl-CoA if 1) there is already plenty of acetyl-CoA coming in from fat metabolism, and 2) there is no dietary carbohydrate coming in and the pyruvate needs to be used to provide glucose (gluconeogenesis). PDH is thus a branch point for metabolism and a reasonable place to look for how things might go awry in the oncogenic state.

Several cancers have, in fact, been associated with inhibition of PDH regulation.

T. McFate et al. identified inhibition of PDH in a human head and neck squamous cell carcinoma (cancers of cells in lining of internal organs)(2). The actual defect was over-expression of an enzyme that regulates PDH activity. We saw that PDH senses the amount of acetyl-CoA in the mitochondrion, and as that gets high, PDH activity is reduced. There is another level of regulation, however. PDH is an enzyme that is inhibited when modified by phosphorylation. The enzyme that catalyzes the phosphorylation, pyruvate dehydrogenase kinase-1 (PDK-1), is turned on by many things, including acetyl-CoA, ATP, and NADH (all the signals of already active oxidative metabolism). So acetyl-CoA not only inhibits PDH directly but also turns on an enzyme that will inhibit PDH by phosphorylation. 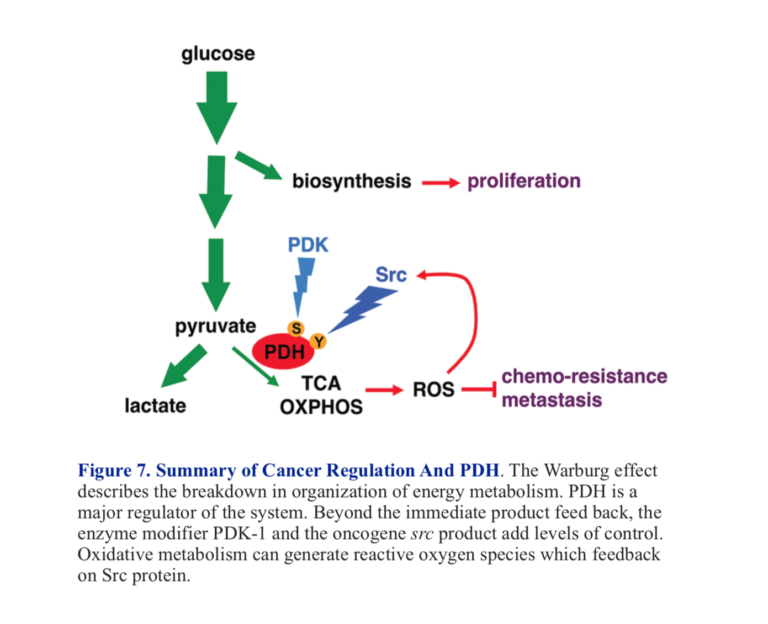 When the over-expression of PDK-1 in the carcinoma was knocked down, tumor growth and invasiveness were inhibited (2). The example is interesting from the perspective of the metabolic approach to cancer. It turns out that a protein known as HIF-1 (hypoxia-inducible factor) regulates PDK-1 and HIF-1, then is regulated by glycolytic intermediates, including lactate and pyruvate. This represents a positive feedback loop where inhibition of PDH by acetyl-CoA and PDK-1 prevents utilization of pyruvate in aerobic metabolism, and pyruvate itself makes the problem worse by further inhibition.

Oncogene Src as Inhibitor of PDH

The Rous sarcoma virus was discovered years before the Warburg effect. Peyton Rous showed that the causative agent in sarcoma was a virus, although it took many years for the viral effect to be accepted. The key gene was designated Src and was the first oncogene to be discovered. It was found that the gene coded for a tyrosine kinase. In 2016, Y. Jin et al. showed that one of the targets of this kinase was a tyrosine residue on PDH (3). This was found to be a different locus than the serine that is the site of phosphorylation by PDK-1. Jin et al. found that the Src kinase increased the production of ROS (reactive oxygen species). These reactive oxygen species are themselves capable of activating Src, producing a negative feedback loop that will further inhibit PDH. Figure 7 shows a summary of major control points of PDH activity.

The metabolic approach to cancer asks how the Warburg effect occurs, how the normal link between glycolysis and respiration becomes disturbed. Looking at one likely candidate, PDH, a regulator of the flow of pyruvate into oxidative metabolism, shows several different kinds of defects. Different cancers show impaired uptake of pyruvate into the mitochondrion and/or reduced activity of PDH by direct phosphorylation or over-expression of PDK-1. It remains to be discovered which of these provides control, how they interact, and whether any can be targeted for therapy. 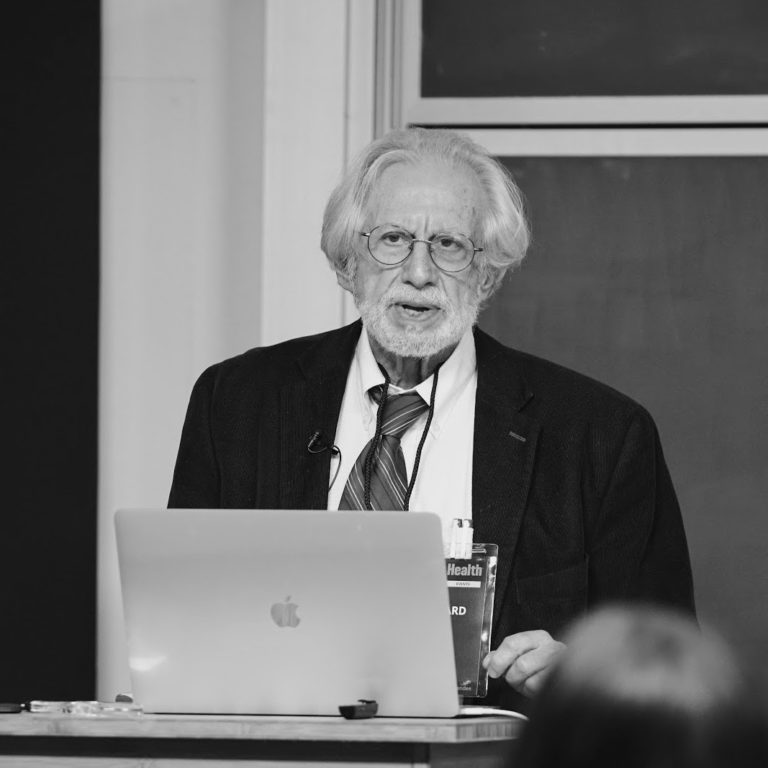