This 2017 review summarizes the potential benefits of a ketogenic diet alongside radiotherapy.

Radiotherapy is constrained by the damage it causes to healthy cells. As a result, any simultaneous treatment that can either increase radiotherapy’s damage to cancer cells or protect healthy cells from damage may increase its effectiveness. Radiotherapy is thought to work in large part by causing oxidative damage to DNA in the nucleus and/or mitochondria; with sufficient damage, the cell is no longer able to replicate or survive.

The idea that cancer is a metabolic disease — and, by extension, that metabolic therapies may be able to affect cancer progression — rose to prominence with the work of Otto Warburg in the 1920s, which found tumor cells excrete high amounts of lactate even when oxygen is available. This observation suggests significant metabolic differences exist between cancer cells and healthy cells. Throughout the 1920s and into the 1950s, others built on Warburg’s work, including Wilhelm Brünings, who provided preliminary evidence that blood glucose suppression could reduce tumor growth.

This metabolic adaptation is thought to provide multiple benefits to cancer cells. As Warburg later hypothesized and others (including Thomas Seyfried) have observed, cancer cells frequently exhibit defective mitochondria. These cells are either limited in their ability to complete aerobic respiration (i.e., the form of glucose metabolism favored by healthy cells when oxygen is available) or can only do so while producing large amounts of reactive oxygen species. This is particularly important, because aerobic glycolysis — the form of metabolism favored by cancer cells — allows cancer cells to meet their energetic needs using an alternative metabolic process that limits production of reactive oxygen species while simultaneously producing the cellular “building blocks” (i.e., carbon and nitrogen skeletons) necessary for rapid cell growth and replication. This pathway also produces large amounts of anti-oxidative molecules that counter the oxidative damage induced by radiotherapy. This alternate metabolic pathway, however, requires tumor cells to consume much more glucose than healthy cells; aerobic glycolysis produces less energy per molecule of glucose consumed than aerobic respiration, so more glucose is required to generate the same amount of energy.

Since the 1990s, at least 24 reports have been published in which a total of 200 patients have been treated using a ketogenic diet. The authors claim the ketogenic diet has beneficial effects on each of the five factors, popularly known as the “5 R’s of radiobiology,” summarized below, and thus they argue the diet enhances the impact of radiotherapy on cancer cells while mitigating the damage of radiotherapy to normal cells. In brief: 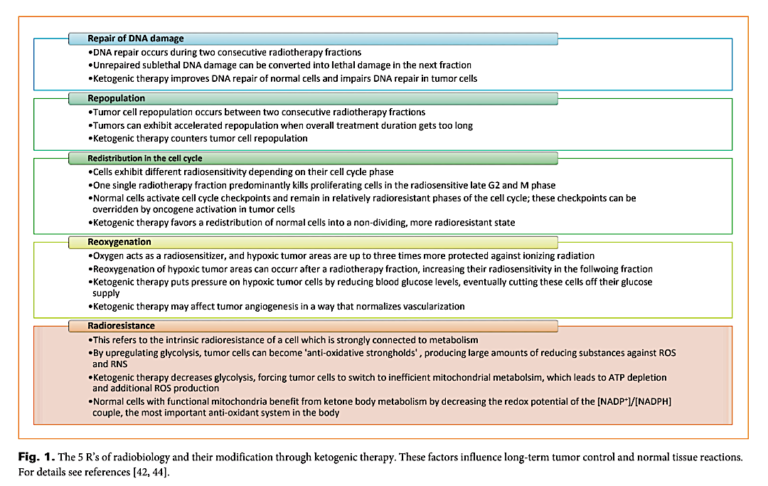 The major effects of a ketogenic diet, which reduces glucose levels and insulin levels and increases ketone levels, on healthy and cancer cells are summarized in Figure 2 below. 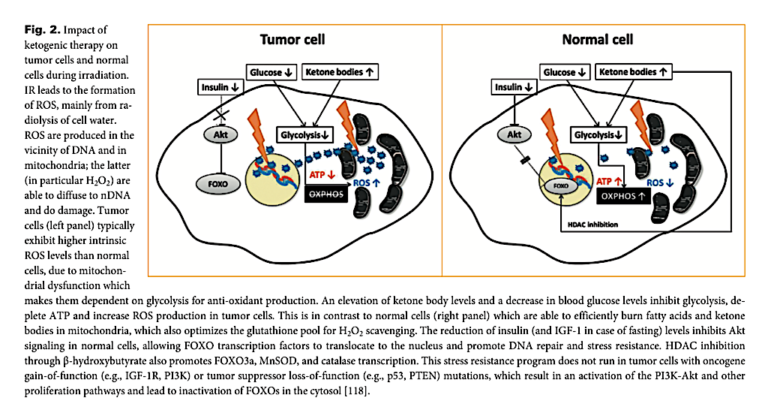 In sum, the authors of this review argue a ketogenic diet increases the vulnerability of cancer cells to radiotherapy and protects healthy cells from the detrimental effects of radiotherapy largely due to its effects on oxidative damage in each cell type. In healthy cells, a ketogenic diet increases production of anti-oxidative molecules while shifting cells toward a state that reduces the detrimental impacts of oxidative damage while increasing repair. In cancer cells, the diet increases production of pro-oxidative molecules and decreases production of anti-oxidative molecules while shifting cancer cells toward an energy-deprived state. Future research will test whether these theoretical benefits lead to improved radiotherapy effectiveness in humans.