Question: Given current data, what are the major risk factors for COVID hospitalization in New York City?

Takeaway: Among those who test positive for COVID-19, age remains by far the most important factor. In both the young and the old, however, heart failure, chronic kidney disease, and diabetes increase risk substantially. Notably, COPD and smoking do not, which suggests COVID hospitalization risk may be more closely linked to overall health than pulmonary health specifically.

This April 2020 cross-sectional study surveys the characteristics of 7,719 patients who were tested for COVID-19 within NYU’s Langone Health hospital system between March 1 and April 2. Patients were tested for COVID if they either showed symptoms suggestive of the virus or based on physician determination.

Tables 1 and 3 from the original paper have been partially recreated below to highlight the most important findings. Age was the most important risk factor for hospitalization, with patients aged 75+ having 66.8 times greater odds of admission than those aged 19-44 and patients aged 65-74 having 10.9 times greater odds of admission. Individuals with chronic kidney disease had 3 times higher rates of hospitalization. Those with diabetes were hospitalized at a 2.8 times higher rate, while those with previous heart failure had a 4.3 times higher rate. Obesity was associated with a 4.3-fold increase in hospitalization for those with a BMI between 30 and 40, and a 6.2-fold increase for those with a BMI over 40. Notably, neither COPD nor current or former tobacco use increased risk of hospitalization; in fact, tobacco users were significantly less likely to be admitted to the hospital than nonusers. 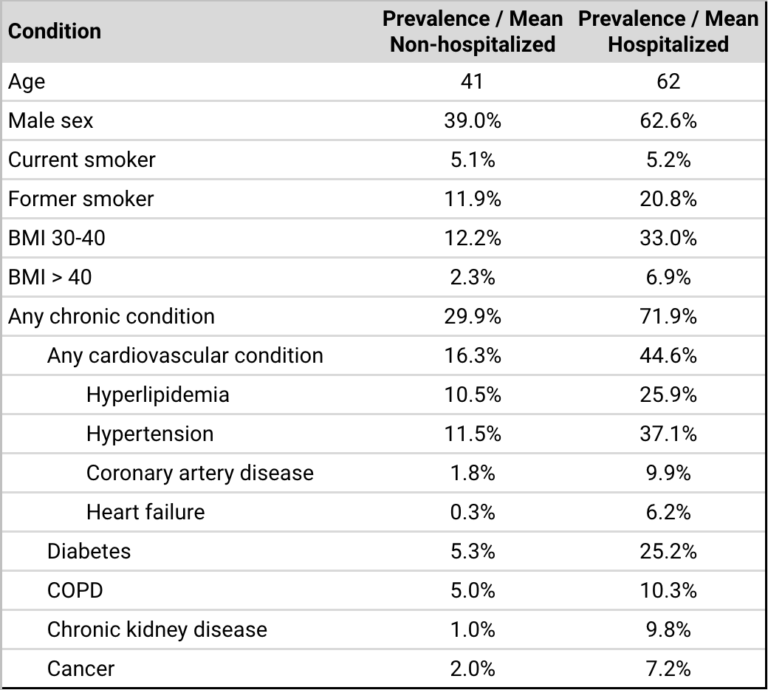 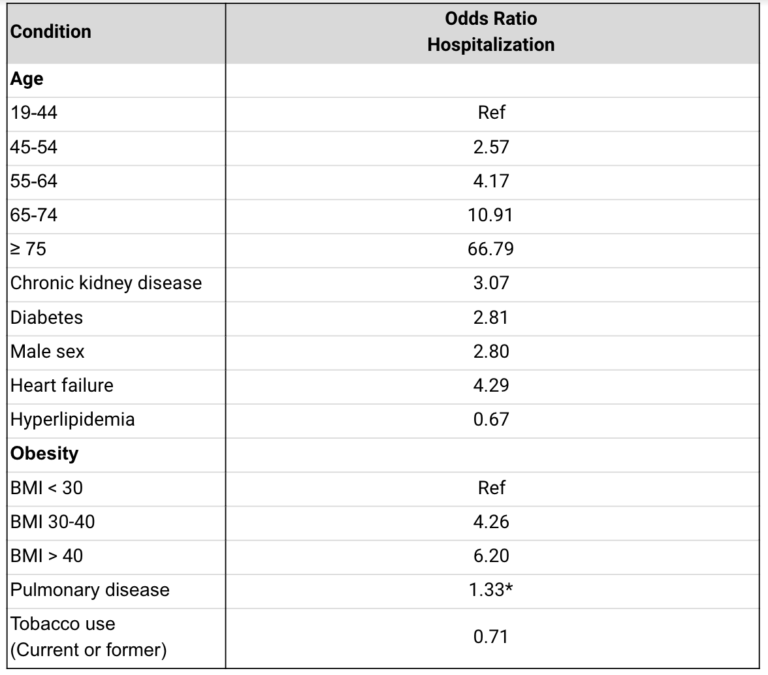 Table 3: Presents the odds ratios for hospitalization among patients testing positive for COVID in this sample. All associations are statistically significant except for pulmonary disease, which is included because its lack of significance is notable. These are fully adjusted odds ratios — i.e., diabetes increases odds of admission by 2.81 times after correcting for other conditions and demographic factors.

Among those hospitalized, ICU admission was primarily associated with elevations in biomarkers including c-reactive protein, d-dimer and ferritin, as well as markers associated with the course of the disease, such as reduced baseline lymphocyte count, elevated procalcitonin, and low oxygen saturation.

Figure 1: Classification tree illustrating likelihood of hospitalization based on different risk factors. Obesity and diabetes are major risk factors after accounting for the impact of age.

Overall mortality rates among the hospitalized in this report are similar to those of other recent reports (1). The distribution of risk factors is similar to those associated with other acute respiratory infections, though the researchers note it is surprising that chronic pulmonary disease does not feature more prominently as a risk factor (2). Previous analyses have also found a similar lack of association between smoking and increased risk of pneumonia-related mortality. The biomarkers that predicted future need for critical care among those hospitalized suggest inflammation may play a major role in disease severity, which also may explain the relationship between obesity and increased disease risk (3).

Overall, these results suggest, at least within the population surveyed, that after accounting for age, metabolic disease may play a greater role in increasing COVID risk than pulmonary conditions, and this increased risk may be mediated by the impact of metabolic disease on inflammation. As additional data is gathered across different populations and age groups, we will continue to better understand the various ways and extent to which chronic disease moderates COVID morbidity and mortality.