Question: What are some of the primary metabolic changes that occur alongside an extended exercise program?

This 2020 paper aimed to provide the most highly controlled analysis of the impact of exercise on specific biomarkers to date.

Fifty-two newly enlisted male Army recruits (average age: 22 years) agreed to participate in an 80-day exercise program. Recruits averaged 1.3 hours of exercise per day, 68% of which was moderate and 32% of which was high intensity. The intervention included endurance and resistance training alongside occupational activities such as marching.

This study was unique in that all recruits were living in the same domicile, which limited variations in sleep, stress, diet, and other factors. The subjects were not compared to a control group, however, so any differences between these factors and what recruits had experienced prior to enlistment may have influenced the outcomes.

The study analyzed 201 metabolites, and statistical significance was assessed at p < 0.0004 after Bonferroni correction. All samples were taken in the early morning after an overnight fast. Consistent metabolite shifts included:

The authors interpreted decreased lipid and ketone levels as indicative of increased muscular beta oxidation (i.e., fatty acid metabolism) efficiency and capacity. This is consistent with previous research suggesting exercise improves the body’s use of muscular fatty acids and ketone bodies, and that this phenomenon directly contributes to the improvements in lipid profile associated with exercise (1). Elevated levels of arginine and related metabolites indicate improved vasodilation and blood flow in response to exercise (2). 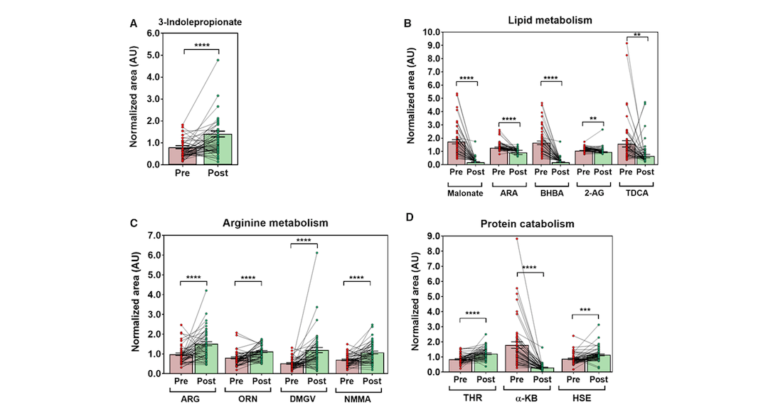 The authors also noted one biomarker, DMGV, predicted a suppressed biological response to exercise. Previous research has found elevated levels of DMGV are correlated with and may predict fatty liver disease and diabetes (3). In the same studies, DMGV was associated with increased visceral adiposity and reduced insulin sensitivity. In this study, higher baseline DMGV levels predicted smaller improvements in body fat, blood pressure, and a variety of lipid markers, which is consistent with previous data and suggests those with higher DMGV levels may see reduced benefit from exercise. The authors noted currently unpublished data suggests sugar-sweetened beverage intake may increase DMGV levels.

Overall, this cross-sectional study indicates exercise improves lipid metabolism and vascular function in less than three months in young, healthy males. Other forms of exercise may lead to a different pattern of improvements than what was observed here.