CrossFit | Bones of the Foot and Ankle

The ankle joint (talocrural joint) is formed by the articulation of the tibia and fibula with the talus bone, one of the tarsals of the foot. During standing and ambulation, the weight of the body is borne by the tibia and transferred through the foot. As with the wrist, where the ulna does not contribute substantially to the formation of the wrist joint, the fibula has no real anatomical basis of support in this system. The distal ends of the tibia and fibula, where they articulate with the talus, can be located by palpating the lateral and medial malleoli (malleolus is singular). These two bony features are the hard bumps we usually point to as the ankle bones. They form the widest point of the ankle joint. The talus sits in a groove formed underneath and within this structure.

Figure 1: The bones of the ankle and foot

The basic structure of the human foot has not changed significantly for some four to five million years. Its interesting design has many supportive and shock-absorbing elements that make bipedal movement both possible and safe. We have supporting arches that carry the weight of the entire body and virtually any load placed upon it. The many joints comprising those arches are reinforced with a multitude of muscles, tendons, and ligaments. The joints in the arches flex and extend slightly in order to dampen forces encountered when the foot makes contact with the earth during movement. The longitudinal arch of the foot forms an effective supportive and shock-absorbing structure. A transverse arch (running across the foot) performs a similar function. An analogous structure would be leaf springs in a car’s suspension, a robust mechanical feature.

Figure 2: Medial view of the longitudinal arch of the foot

Tibia — This is the larger of the two bones of the shin or lower leg. It is bracketed by joints above and below — the knee above and the ankle below. Both ends of the bone are enlarged by comparison to the long shaft. The distal end of the tibia terminates with a process, the medial malleolus. The medial malleolus protrudes toward the medial side of the foot and extends lower than any other portion of the bone. The tibia is a weight-bearing bone capable of withstanding forces at least five times body weight. Its sturdy nature can be enhanced with progressive weight-bearing exercise or reduced with sedentary habits. While the tibia is strong, it is one of the most frequently fractured bones in the body. One sub-type of fracture — a stress fracture — is a condition where repetitive loading of the bone with even light-to-moderate loads (distance running for example), overwhelms the bone’s capacity to remodel and repair itself. Over time, a line of architectural disruption, a hairline fracture, appears. It is estimated that up to 30 percent of all runners will experience such a fracture during their training life. 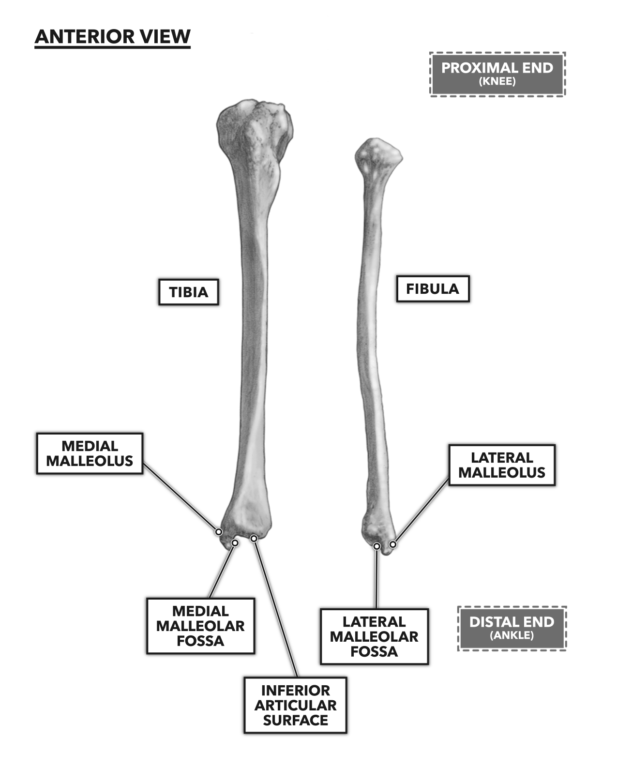 Figure 3: Anterior view of the tibia and fibula

Fibula — The fibula is the long and thin bone lateral to the tibia. Like the tibia, it spans the distance between the knee and ankle joints. It has a small pointed expansion called the lateral malleolus on its distal end.

There are a total of seven irregularly shaped tarsal bones comprising the tarsus. All seven occur between the distal tibia and fibula and the proximal metatarsals. These are important structures, as they are essential architecture in the force-dampening and supportive functions of the arch of the foot. 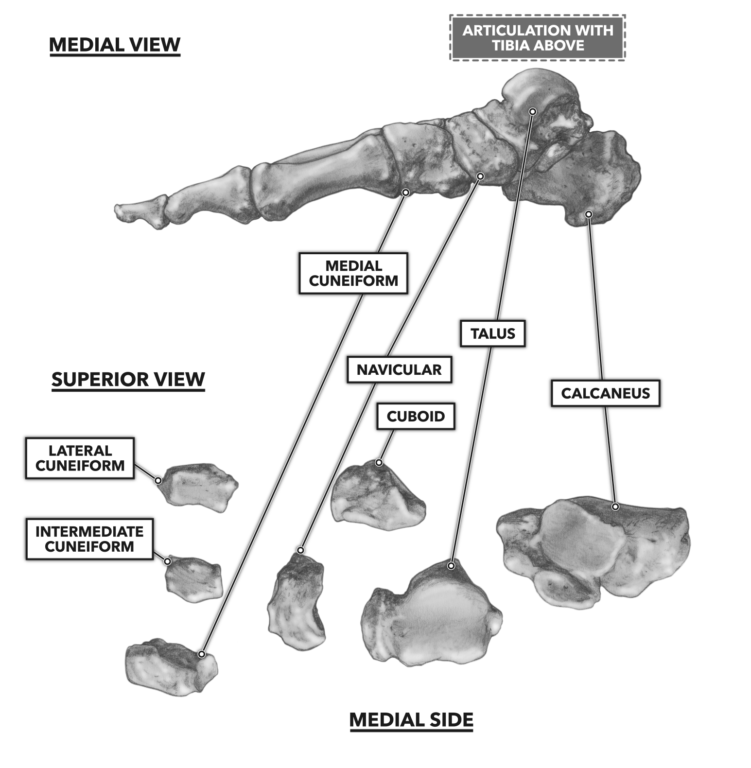 Calcaneus — The calcaneus is the largest tarsal bone of the foot and the easiest to locate. It is the most posterior of the tarsals and forms the heel of the foot. It articulates with the talus above it to form the subtalar joint.

Immediately anterior to the tarsus is a row of five relatively longer bones, collectively called the metatarsus. These are easy bones to remember, as each is simply called a metatarsal. The conventional nomenclature numbers the metatarsals from one to five, with the first metatarsal being the most medial (behind the big toe) and the fifth being the most lateral (behind the little toe). The metatarsals — specifically the second, third, and fourth — contribute to the structure of the longitudinal arch, as their position is relatively higher than the flanking first and fifth metatarsals. They also contribute to the transverse arch in the forefoot. The metatarsals are maintained in close proximity by several and various short ligaments. 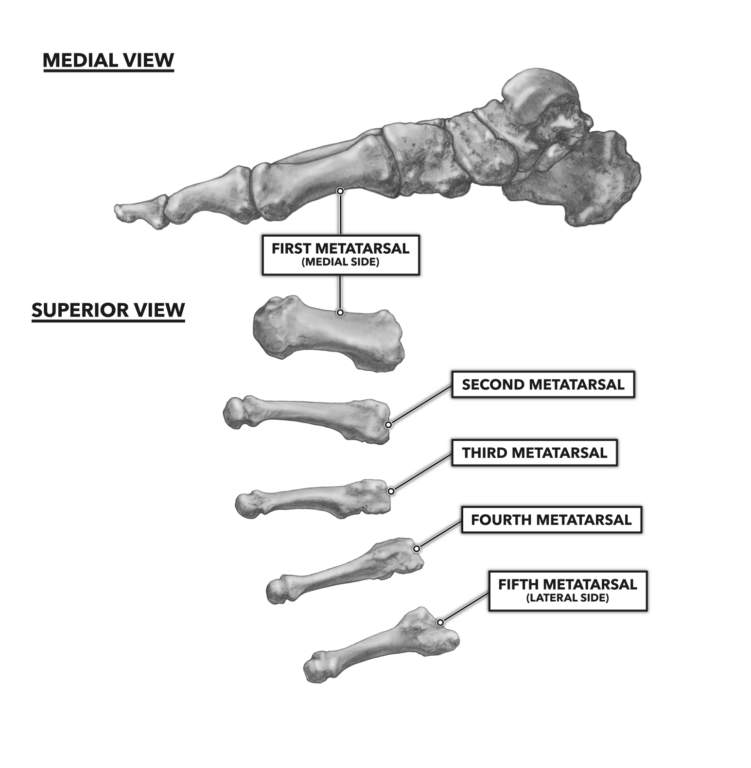 Phalanges — In the foot, the phalanges are the toes (or digits), and like the metatarsals, they are referred to by number, medial to lateral. Each phalange, with the exception of the first, is comprised of three small bones. Each of these is called a phalanx (phalanx = singular; phalange = plural) and is referred to by positional relationship to the body — proximal, intermediate, and distal. For example, the second phalanx of your middle toe would be the intermediate phalanx of the third phalange. The exception to this convention is driven by the presence of only two phalanx in the first phalange (big toe, great toe, or hallux). As a result, only a proximal and distal phalanx are present. 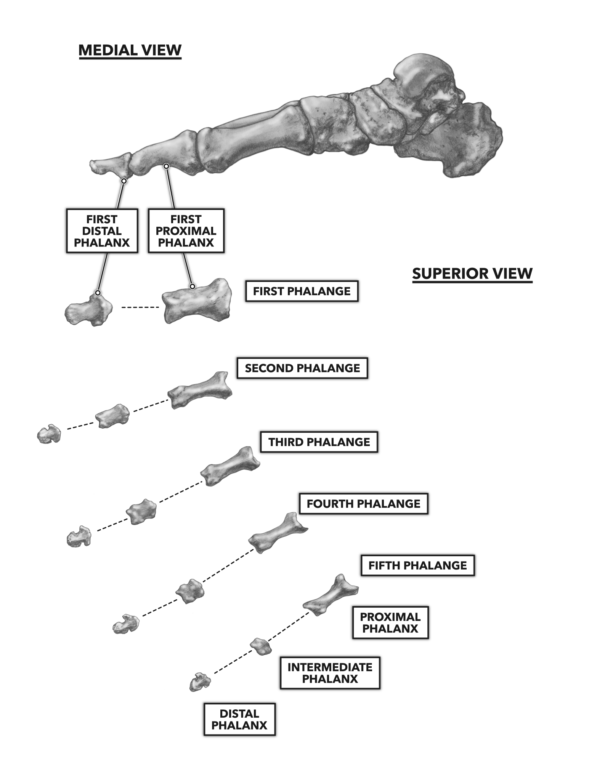